Robert Lepage during the Performance and Design Practicum for the 2012 Eugene McDermott Award and residency. 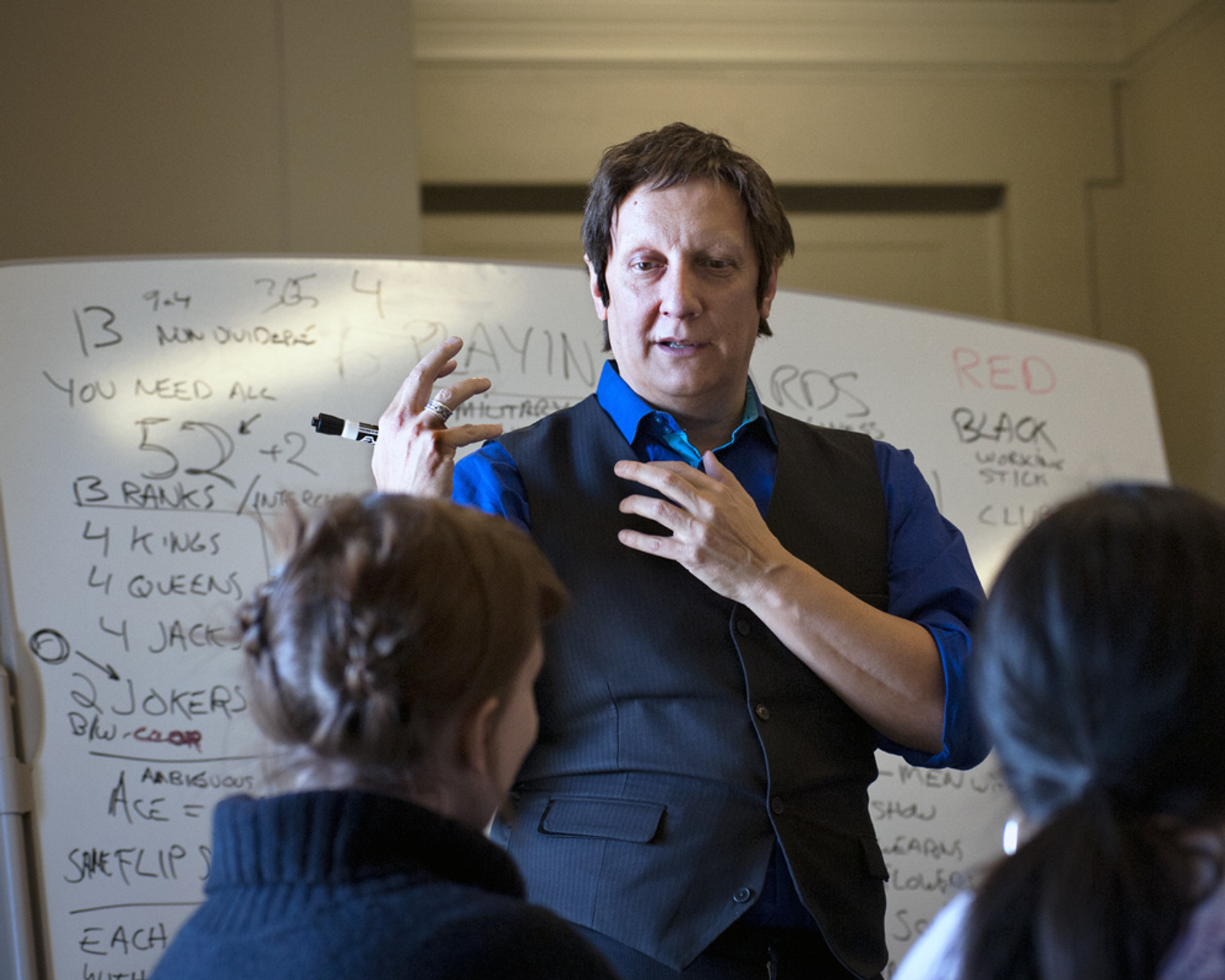 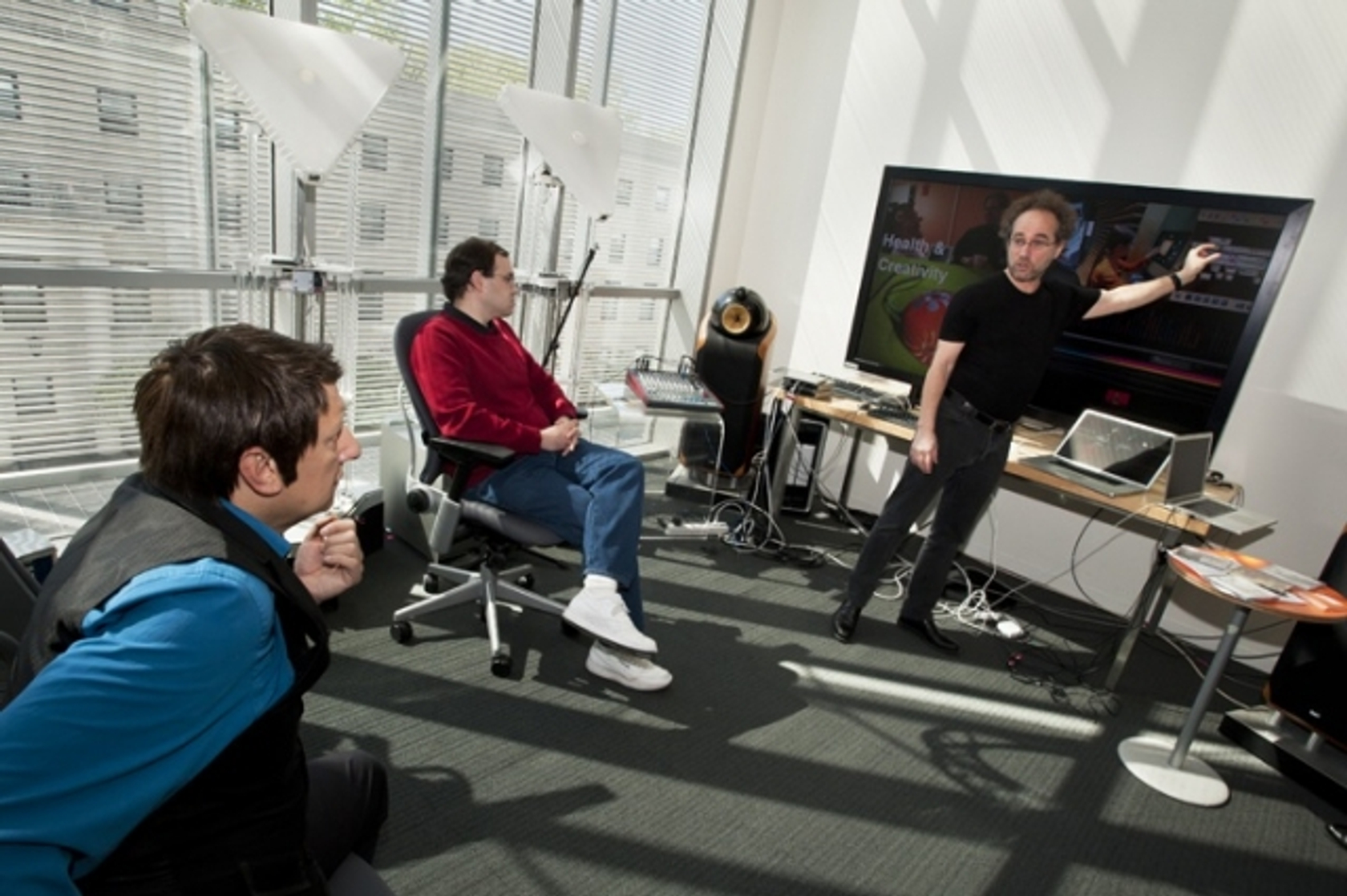 Versatile in every form of theater craft, Robert Lepage is equally talented as a director, playwright, actor and filmmaker

The Eugene McDermott Award in the Arts at MIT recognizes rising, innovative talents and offers the recipient a $100,000 prize and a campus residency. Established in 1974 by the Council for the Arts at MIT, the Award is bestowed upon individuals whose artistic trajectory and body of work indicate that they will achieve the highest distinction as leaders in their fields. One of the most generous arts honors in the US, the Award reflects MIT’s commitment to risk-taking, problem solving and to the idea of connecting creative minds across disciplines. The McDermott Award is considered an investment in the recipient’s future creative work, rather than a prize for a particular project or lifetime of achievement.

Performance and Media Artist Robert Lepage brought his talent and unique multidisciplinary perspective to MIT during his residency from April 24-26, 2012. His time on campus was full from morning to night as he met with and collaborated with MIT students, faculty and staff, participated in two public programs and received the 2012 Eugene McDermott MIT Award in the Arts at MIT during a gala held in his honor.

Students were given exclusive access to Lepage during a special question and answer session moderated by Teresa Neff, lecturer from Music and Theater Arts at MIT. During this session, he spoke about the inspiration for the technologically dazzling set, dubbed “The Machine,” he created for the Metropolitan Opera’s new Der Ring des Nibelungen and showed clips from Das Rheingold and Wagner’s Dream, a documentary about the making of the Ring cycle for the Met. Lepage also collaborated with students in a performance practicum, a special theater class that he launched with a workshop when he first came to campus in February. He discussed the creative process used at his production company, Ex Machina, and introduced playing cards as the catalyst or “resource” for the semester. Students from MIT, Harvard and Emerson had developed scenes during the past three months, and presented for Lepage seven vignettes, complete with lighting, set and sound design. Lepage was particularly impressed by the depth and range of character development in the students’ work and engaged in a lively conversation with them about what he had seen.

Two free public programs provided the public and the MIT community the opportunity to see and hear Lepage in person: The Science of Illusion and Technology in Stagecraft and Storytelling.

The first program was co-presented by the Arts at MIT and the MIT Museum as part of the Cambridge Science Festival, on the topic of science, illusion and culture. John Durant, Director of the MIT Museum and Adjunct Professor in the Science, Technology and Society Program opened the panel and introduced the other panelists, whose work and research provided a range of perspectives on illusion and magic. In addition to Mr. Lepage, other panelists were Professor George Barbastathis, Singapore Research Professor of Optics and Professor of Mechanical Engineering; Assistant Professor Graham Jones, Anthropology; and Seth Riskin, Manager, Emerging Technologies and Holography/Spatial Imaging Initiative at the MIT Museum.

The panelists held a lively discussion about the relationship of illusion to human perception and offered insights into how magical thinking drives technological innovation and the human imagination. Panelists discussed everything from holograms to invisibility cloaking — techniques to make objects vanish by bending light to fool the eye — and the audience was treated to some magic tricks by Graham Jones–including a book that burst into flames.

The second program offered a fascinating glimpse into Lepage’s thinking, as he discussed his work with Peter Gelb, General Manager, Metropolitan Opera. The 90-minute program, Technology in Stagecraft and Storytelling, began with a discussion of Lepage’s new production of the Ring cycle for the Metropolitan Opera but spanned Lepage’s extraordinary body of work — from film to one-man performances, Shakespeare to Peter Gabriel concerts, Cirque du Soleil productions to spectacular architectural projections. The talk included a multimedia presentation showcasing the sophisticated sets for the Ring cycle as well as many other productions, including The Image Mill, an outdoor illumination in the Québec harbor that used the surface of the Bunge grain elevators as a giant screen. The discussion of Lepage’s diverse career as a multidisciplinary performance and media artist highlighted his versatility in a full range of theater craft: from directing to acting, to filmmaking and writing plays. Philip Khoury, Associate Provost and Ford International Professor of History, introduced the panelists and moderated questions from the audience.

Lepage and members of his company Ex Machina met extensively with members of the Media Lab and Theater Arts to exchange ideas about emerging research and new technologies. They attended the MIT Media Lab’s open house and viewed demonstrations of current projects in many areas, including Tod Machover and graduate students in the Opera of the Future lab, and Deb Roy and the Cognitive Machines group. A visit to Global Shakespeare with Professors Peter Donaldson, Diana Henderson, and Shankar Raman revealed new digital tools for Ex Machina to draw upon for future presentations of Shakespeare.

The residency culminated when Lepage was presented with the 2012 Eugene McDermott Award in the Arts by President Hockfield and Peter Wender, chair of the McDermott Selection Committee, at a gala held in his honor. This private event had a distinguished list of Honorary Hosts, which included Canadian diplomats and creative arts leaders from both Boston and Canada. Members of the Council for the Arts at MIT and the MIT Corporation were sponsors of the gala, which was attended by their guests, MIT faculty, and Mary McDermott Cook, the daughter of Margaret and Eugene McDermott, who traveled from Texas for the event.

Can you imagine the science behind an invisibility cloak? What about a hovering hologram? The Science of Illusion pushes beyond the boundaries of the real and provides insights into how magical thinking drives technological innovation and the human imagination.

Multidisciplinary media and performance artist Robert Lepage, recipient of the 2012 Eugene McDermott Award in the Arts at MIT, has spent his distinguished career exploring technology that enhances storytelling and stagecraft, circus performance and architectural illuminations, filmmaking, urban projections, and more. Join him along with a group of MIT researchers for an evening of discussion and demonstrations about the art and science of illusion. Produced in partnership with the Cambridge Science Festival

Multidisciplinary performance and media artist Robert Lepage and Metropolitan Opera General Manager Peter Gelb explore the use of technology in stagecraft and storytelling in this free public program. Beginning with Lepage’s new production for the Met of Wagner’s Der Ring des Nibelungen, the presentation will range across an extraordinary body of work — from film to one-man performances, from Shakespeare to Peter Gabriel concerts and from Cirque du Soleil productions to spectacular architectural illuminations. The talk will include a multimedia presentation, including highlights from the Met’s Ring cycle. Free and open to the public.

Robert Lepage’s work, especially through the use of cinematic special effects and new technologies, integrates seemingly unrelated elements to re-imagine for the 21st century the ritual origins of theater in communal life, storytelling, and personal and collective memories.

Lepage’s creative and original approach to theater emerged in the 1980s with productions of Circulations, The Dragons’ Trilogy, Vinci, Polygraph, and Tectonic Plates in Canada. From 1989 to 1993, he served as artistic director of the Théâtre français at the National Arts Centre in Ottawa. With A Midsummer Night’s Dream in 1992, he became the first North American to direct a Shakespeare play at the Royal National Theatre in London.

Ex Machina, the multidisciplinary production company that Lepage founded in 1994, was a turning point in his career. In that year, he made his first feature film, Le Confessional, followed in 2000 by Possible Worlds, his first feature film written in English, and a film adaptation of his successful play The Far Side of the Moon, in 2003. In 1997, he opened La Caserne, an avant-garde production center in Québec City devoted to the premise that new artistic forms will emerge from a co-mingling of the performing arts (dance, opera, theater) with the recording arts (film, video, and multimedia). The range of cultural forms Lepage explored grew. He directed Peter Gabriel’s music tours Secret World (1993-94) and Growing Up (2003-04), designed the exhibition Métissages for the Musée de la civilisation in Québec City, and directed two shows for Cirque du Soleil — KÀ in 2005, a resident show at MGM Grand in Las Vegas; and TOTEM in 2010, currently touring North America and the U.K. For Québec City’s 400th anniversary in 2008, Lepage and Ex Machina created the largest architectural projection ever achieved, The Image Mill™ and, in the following year, Aurora Borealis, a permanent lighting installation for Québec’s harbor inspired by the northern lights.

Lepage’s entrance into the opera world began in 1993, when he staged the successful double bill of Bluebeard’s Castle and Erwartung at the Canadian Opera Company. He continued with stunning productions in Japan, Paris, New York, and Toronto, including The Damnation of Faust (1990), 1984 (2005), The Rake’s Progress (2007), and The Nightingale and Other short Fables (2009). His pioneering approach to Wagner’s Der Ring des Nibelungen cycle at the Metropolitan Opera over two seasons, beginning in September 2010 and culminating in May 2012, is captivating audiences and generating discussion among artists and critics in all genres.

Architects.org: Technology in Stagecraft and Storytelling with Robert Lepage