“Hajanga,” is the fourth and final single from Collier’s debut album, ‘In My Room’. 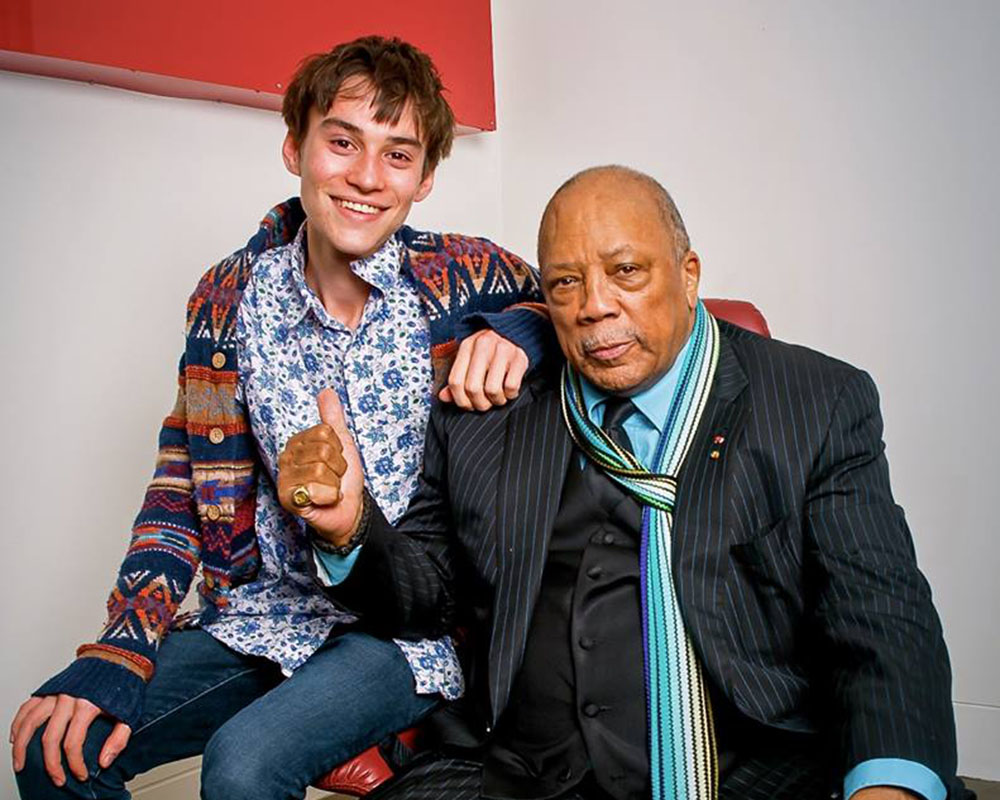 Jacob Collier is not like other YouTube stars. The English 22-year-old rose to fame with inventive video covers of popular songs like Michael Jackson’s “P.Y.T.” and Stevie Wonder’s “Isn’t She Lovely,” the arrangements rendered in dizzying multiplicity with Collier performing all the instruments and singing every harmony. Collier, a prodigy among prodigies who made his first videos as a teenager, could have established a career by more conventional means, but he chose to hunker down in his room and upload videos to the Internet. The music that results—explosively rhythmic, steeped in jazz but oriented toward pop, bursting with strange harmonic visions‚—is quite unlike anything else.

“Imagine a Prince, a Michael Jackson, a Wynton Marsalis, a Yo-Yo Ma,” says Fred Harris, Director of Wind and Jazz Ensembles at MIT. “Imagine to be able to work with that kind of young artist when they’re just at the precipice like this.”

Harris and MIT’s music students will get the chance to do just that, when Collier arrives for a week-long residency that culminates in a concert on December 10, 2016 at Kresge Auditorium in Cambridge. The concert will include solo performances by Collier, but at its heart it is a collaboration between Collier and MIT. The MIT Jazz Festival and Vocal Jazz Ensembles—along with members of the Concert Choir, Chamber Chorus and Symphony—will perform new arrangements of several of Collier’s originals from his 2016 album “In My Room.” The Festival Jazz Ensemble will also debut a new performance system, developed at the MIT Media Lab, that allows Collier to interact with the ensemble via their mobile devices, a kind of improvisational social network.

Collier, for his part, looks forward to the prospect of collaboration, both living and technological. “At its best, technology enables human beings to be more human,” he says. “That is to say – facilitate the creation of more things, connect ideas and minds together, expand the future of what’s humanly possible, grow people’s imaginations, and give people the tools to do more and more.”

That attitude is precisely what makes Collier special, says Ben Bloomberg, a graduate student at the MIT Media Lab who helped develop the technology for Collier’s show. “He has all these technical skills and knowledge, but really he thinks about things emotionally.”

Bloomberg’s relationship with Collier began after the MIT grad student saw one of Collier’s videos online and impulsively sent a message to the musician’s fanpage, offering his services in case the wunderkind ever wanted to adapt his act to the stage. Collier responded a few weeks later, saying that he was getting ready to play the Montreal Jazz Festival and was trying to figure out how to perform all the parts of his arrangements himself, just like he does in his videos. “Of course [the videos] take weeks and weeks and months and months to make at home, so we had to think of a way, basically, that he could create all of these different layers and components of the video on the fly,” Bloomberg explains.

They ended up developing three special systems. The first allows Collier to loop himself—that is, record an instrument and play it back on a loop—in a far more complex way than looping systems on the market currently allow. “You see a lot of systems where people build up something, and then they’re kind of stuck in that tempo or that chord progression,” Bloomberg explains. “So our goal was to make it so he could actually make these really complicated arrangements.” An overhead projection loops Collier’s physical form as well, so that he appears to multiply onstage, a virtual clone orchestra.

Bloomberg also developed a new type of harmonizer, which allows Collier to sing in multiple voices at once. Such devices already exist on the market, offering a nuanced alternative to the more commonly used synthesizer, which employs pre-recorded sounds, and the vocoder, which functions more like a vocal filter. Bloomberg’s harmonizer is especially sophisticated, allowing Collier to “sing” chords of up to twelve notes.

“We found that this method just sounded more natural,” Bloomberg says. “It was more full sounding, so when he plays a really low note, you really get that rumbling bass.”

It was very important to get the harmonizer right. One of the most distinctive features of Collier’s musicality is his taste for stacked vocal harmonies, which he arranges to breathtaking, almost overwhelming, effect. Collier says that of all the instruments he has mastered, his voice is his favorite.

“For me, it’s the instrument capable of the most variety of colors, especially in the recording environment,” he says. “The joining together of human voices to create harmony has a timelessness to it that never loses its power. It’s such a multi-dimensional instrument, and there is so much that one can do with it – it speaks directly to the soul.”

Bloomberg says that Collier’s relationship to technology is unique as well. “A lot of people use technology, especially in music, as a crutch. … But the amazing thing about Jacob is that all the technology is applied in such a way that it’s not really a crutch—it’s actually enabling him to do something that he previously wouldn’t be able to do. It’s not that it’s helping him play in tune, it’s letting him play five instruments at the same time.”

The concert on Dec. 10 will feature a new arrangement of Collier’s “Hajanga,” an ebullient, soul-inflected song, and something of a thesis statement for the musician. “It represents the essence of joy in life, the energy of the universe,” Collier says. “The song goes ‘round and round’, like all the cycles in the world. It takes you on a bit of a journey. It’s a ‘cosmic lullaby’ – the reassurance of the universe, turning always, with you a part of it.”

Jacob Collier—Imagination off the Charts