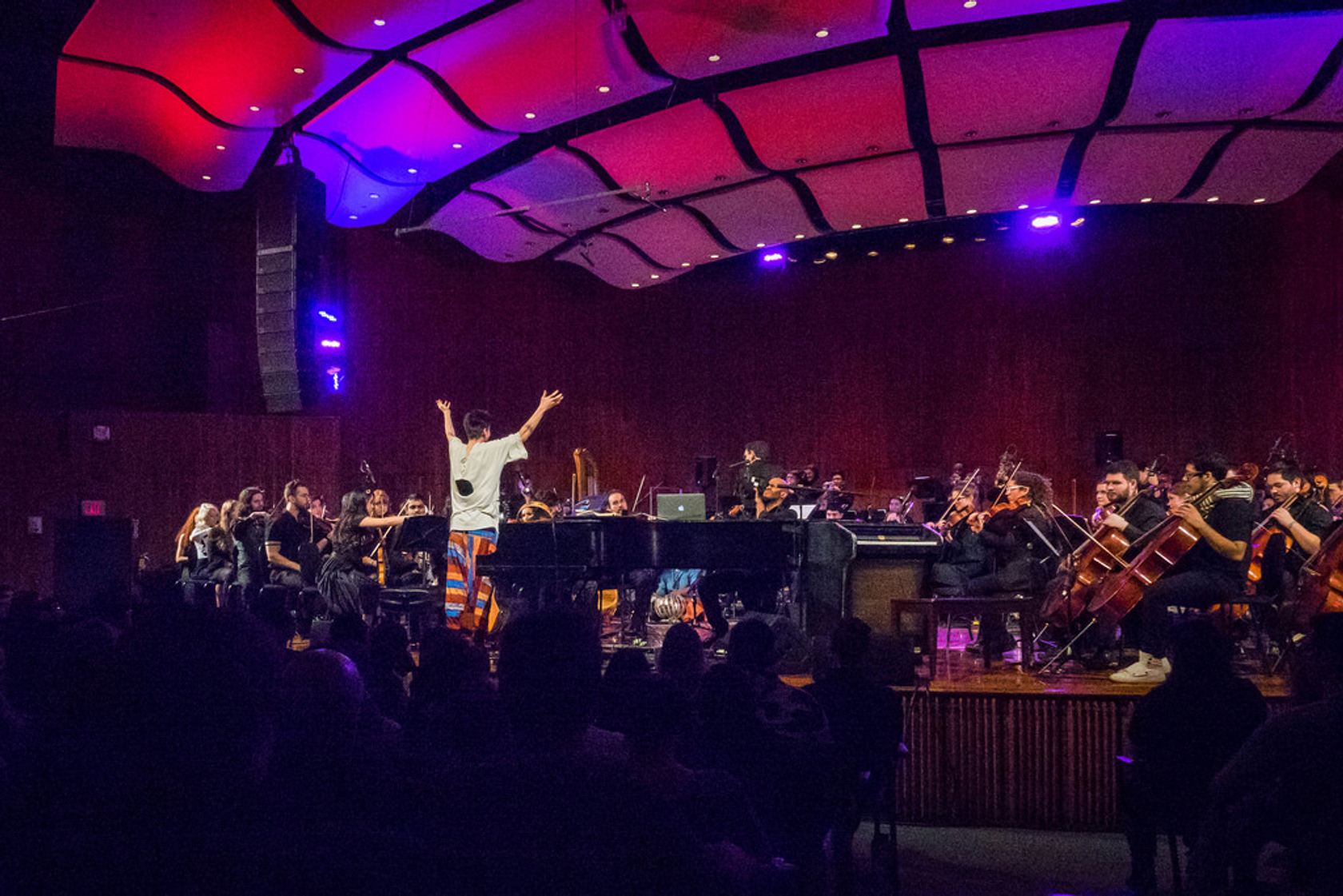 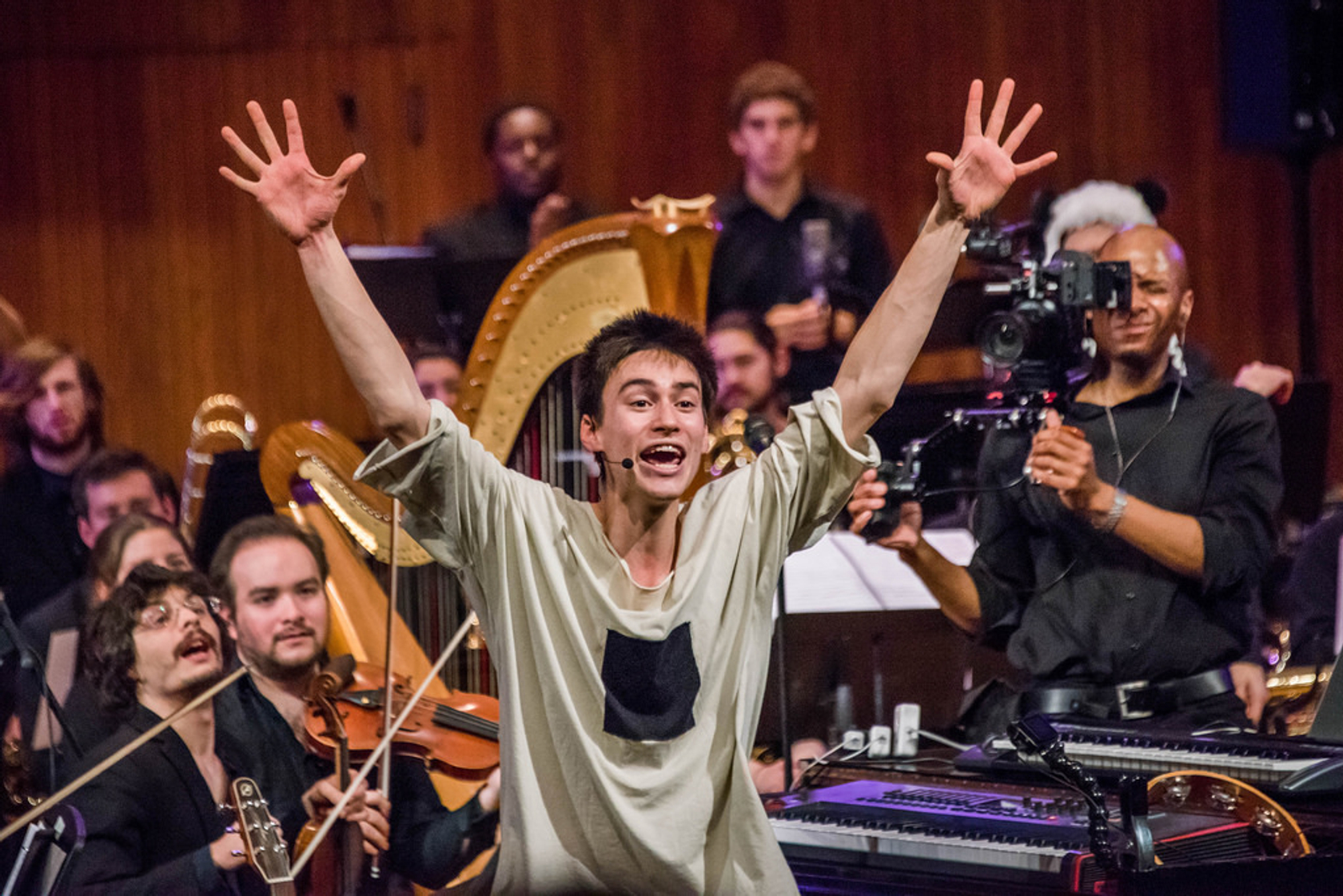 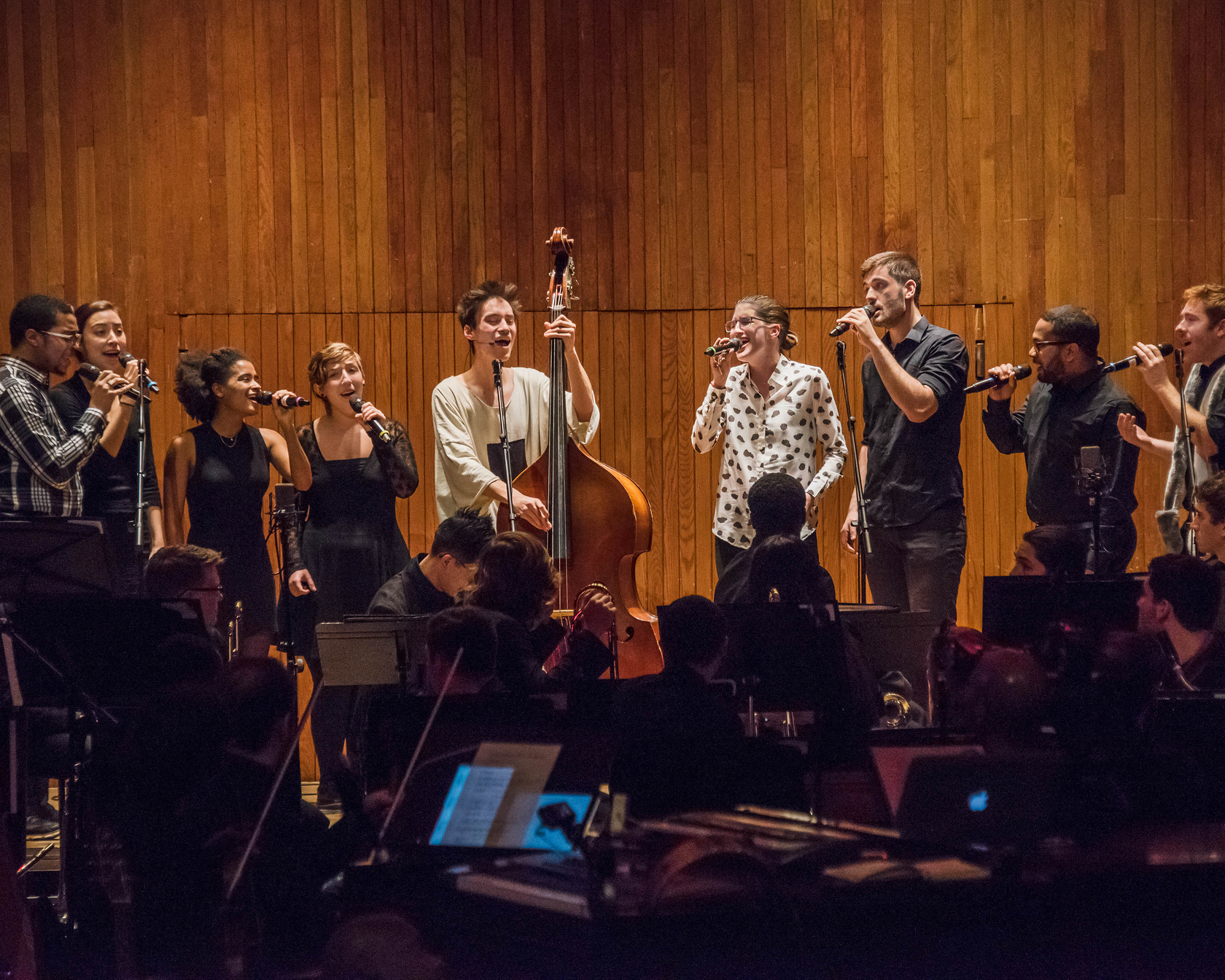 "The technology that we're making actually allows him to do more
and be even crazier than he could be without it...
— Ben Bloomberg, PhD student, Media Lab 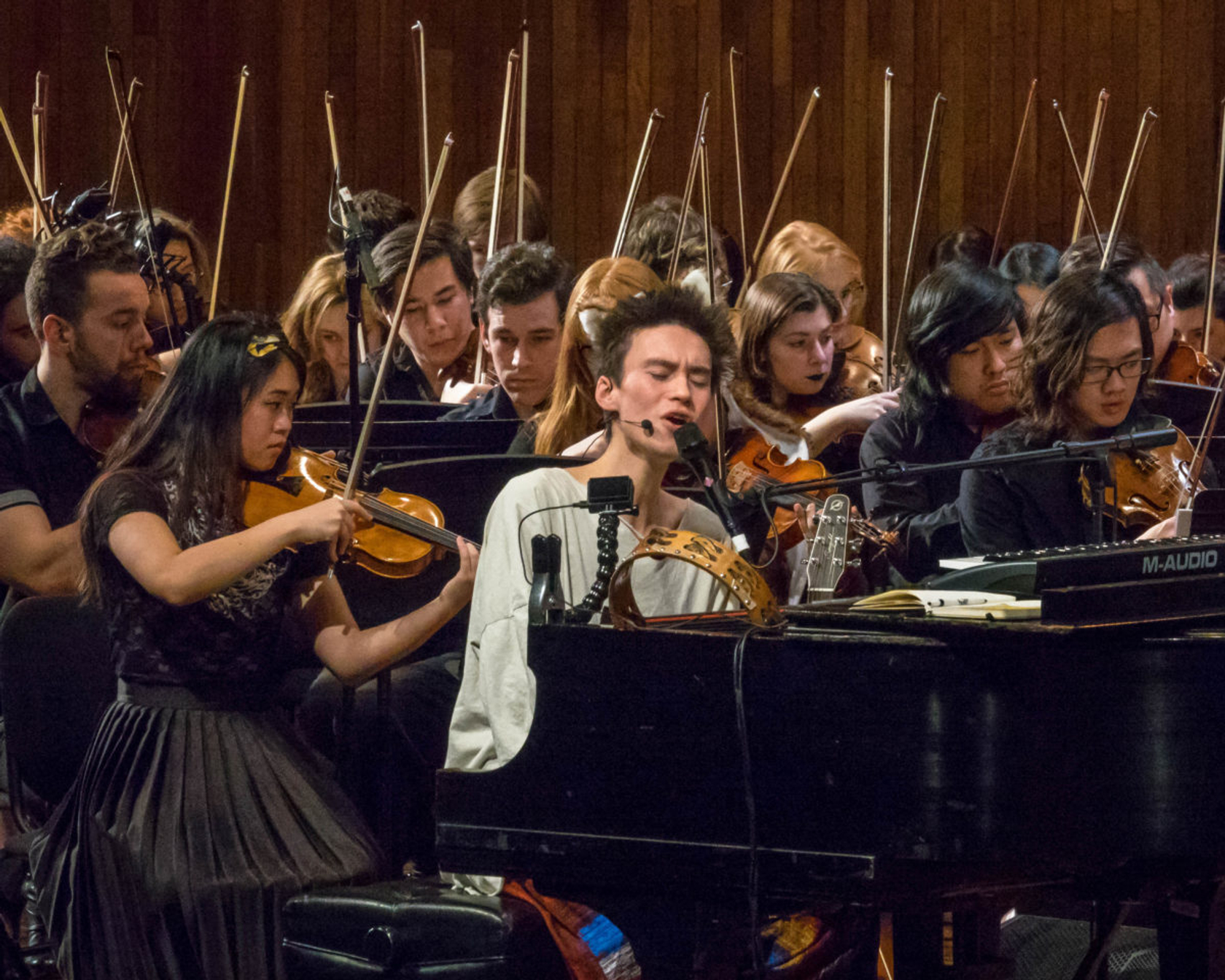 Jacob Collier. Courtesy of the artist.

Imagination Off The Charts—Jacob Collier at MIT: A unique project—Jacob Collier’s first-ever college residency—brought together the MIT Festival Jazz Ensemble, MIT’s Ben Bloomberg and other members of the MIT music community. Collier’s December 2016 residency at MIT—culminating with a major concert in Kresge Auditorium on December 10—involved several first-time elements. Collier and the MIT Festival Jazz Ensemble (FJE) with additional musicians presented the premiere of an experimental piece crafted by Collier. Several new big band arrangements of Collier’s music were also featured, two of which were crafted by MIT alumnus Jamshied Sharifi and one by Collier himself. The concert also included Collier performing some jazz standards with the FJE as well as some solo performances.

Jacob Collier’s visits to the Institute are part of MIT Sounding, an innovative annual performance series that blurs the boundaries between contemporary and world music. Curated by Evan Ziporyn, Faculty Director of the MIT Center for Art, Science & Technology, the 2016-17 season of MIT Sounding integrates the avant-garde sounds of ancient instruments and traditional practices with cutting-edge composition and technology to present various visions of a new, evolving music that defies genre.  The 2018–19 season of the innovative annual performance series MIT Sounding continues to blur musical boundaries. This season of MIT Sounding presents unique artists who push the envelope of their respective genres, creating new evolving music for the 21st century.

Jacob Collier at MIT
Special Orchestral Concert Celebrating the release of Collier’s “Djesse Vol. 1” and his return to MIT

Celebrating the December 7, 2018 worldwide release of Djesse Vol.1—the follow-up recording to the 2017 double Grammy-winning In My Room—Jacob Collier preempts his Djesse world tour with a one-of-a-kind performance on December 8 at MIT, an artistic home-away-from-home for him over the past several years.

Jacob Collier’s new album was the first of four volumes released throughout 2019. The December 8th concert featured most of Djesse Vol. 1 including the first live performance of “With The Love In My Heart,” adapted by Jamshied Sharifi, plus rarely heard orchestral arrangements along with musical surprises.

Collier’s return to MIT follows the success of his 2016 large-scale concert and subsequent New England Emmy-winning documentary about that event, Imagination Off The Charts: Jacob Collier Comes to MIT.

Jacob Collier and the MIT Festival Jazz Ensemble (FJE), with additional musicians, presented the premiere of an experimental piece crafted by Collier. Featuring several new big band arrangements of Collier’s music, two of which are crafted by MIT alumnus Jamshied Sharifi and one by Collier himself, Collier performed jazz standards both solo and with the FJE.

Free and open to the public, no reservations required

Jacob Collier discussed and demonstrated facets of his process of composing and arranging music.

Founded in 1963 by Boston jazz icon Herb Pomeroy and led since 1999 by Dr. Frederick Harris, Jr, the MIT Festival Jazz Ensemble (course 21M.442), is comprised of outstanding MIT undergraduate and graduate students studying a wide range of disciplines. The FJE is a 2013 recipient of MIT’s Laya and Jermone B. Wiesner Award in the Arts. It is the only MIT entity that has earned this recognition three times (previous awards in 1991 and 1982), a testament to its consistent high quality over many decades. FJE has released five professional recordings including its major jazz label debut release on Sunnyside in 2015, Infinite Winds (a joint CD with MITWE). The CD which features FJE performing the world premiere recording of Chick Corea’s From Forever (composed for FJE), received a five-star review from Down Beat and was chosen by the magazine as one of its “Best Albums of 2015 Five-Star Masterpieces”—the first such recognition of its kind for a collegiate ensemble. The Boston Globe called the recording “one of the most compelling of 2015.” The FJE has a long history of performing original music by MIT students and composers from around the world. Since 2001, it has presented over 40 world premieres. Mark Harvey, Herb Pomeroy, Jamshied Sharifi, Ran Blake, John Harbison, Chick Corea, Joe Lovano, Kenny Werner, Don Byron, Steve Turre, Magali Souriau, Guillermo Klein, Bill McHenry, Chris Cheek, Miguel Zenón, Dominique Eade, Eviyan and George Schuller among others have worked with the MIT Festival Jazz Ensemble. Learn more about the MIT Festival Jazz Ensemble

Since starting MIT in 2007, Ben Bloomberg has worked for Professor Tod Machover at the Media Lab, touring internationally to design and support technology for Opera of the Future productions. He specializes in the design and implementation of advanced surround sound and audio systems for large venues, but he has created many kinds of live performance systems ranging from musical instruments to architectural lighting. Ben started running sound at age nine and has since engineered hundreds of shows in venues all over the world—his designs have been praised (with their associated performances) by critics for the the London Times, Chicago Tribune and Wall Street Journal. In his time on the road, he’s crossed paths with many artists, engineers and designers—from Björk to Ariana Grande, people seem to seek him out when there’s a challenge that hasn’t been seen before, requiring novel and highly customized solutions. At the lab and beyond, Ben works with his close friends to build systems which push the limits of performance and expression. Their goal is create technology which brings the performers closer to the audience instead of diminishing them in the presence of large screens or sets. Learn more about Ben Bloomberg

Jacob Collier is a multi-instrumentalist, singer, arranger, composer, and producer based in London, England. Hailed by many as one of the most prodigious and innovative musicians and thinkers of his generation, he has proven himself worthy of every superlative that has been used to describe him. Spreading joy amongst a multitude of generations with a glorious child-like energy, an old soul, a knowledge of music that is second-to-none, and a tremendous warmth of humanity, Colliers’s style is flabbergastingly unique, combining elements from every genre under the sun—and his world is easy to get lost in.

Collier, who is mostly self-taught, has been creating music all his life. In 2012, he began to share some of these creations with the world via YouTube. These self-produced, multi-layered, and multi-tracked audio-visual creations began to attract ears from all over the world, racking up tens of millions of views. One day in 2013, Collier’s sounds reached Quincy Jones’ ears. Jones signed Collier to his management label to help bring some of Collier’s ideas to life. In 2016, Collier’s debut album, In My Room, was released. It was entirely self-recorded, arranged, performed, and produced in his home in London.

Jacob Collier then set out to bring his room to the stage. With the help of MIT PhD student Ben Bloomberg, Collier designed and built a groundbreaking one-man live performance vehicle which defies the musical laws of nature, featuring a circle of musical instruments, six simultaneous multi-instrumental loopers, a custom-designed vocal harmoniser instrument, a real-time reactive multi-Jacob video screen, and one Jacob in the centre of it all. The first ever performance was held at the Montreux Jazz Festival, 2015, where Jacob opened for Herbie Hancock and Chick Corea. Minds were blown; goosebumps were risen. Collier set out to tour the world.

From winning two Grammy awards for his debut album; to playing 150 shows in 26 countries on his One-Man-Show World Tour; to collaborations with Hans Zimmer, Herbie Hancock, Pharrell, Tori Kelly, Snarky Puppy, Metropole Orkest, Samsung and Apple; to speaking at the TED Conference 2017; to harmonizing hundreds of fans’ #IHarmU melodies to crowdfund his musical adventures; to teaching masterclasses and confounding music theorists around the globe with chords and rhythms that shouldn’t exist; to improvising circle songs with musicians on the streets of the world; to simply walking through the rain—Jacob Colliers’s life is full of different colors. He learns new things every day.

NPR: With ‘In My Room,’ Jazz Phenom Jacob Collier Is Bringing Jubilation Back

About the MIT Festival Jazz Ensemble

Video: Imagination Off the Charts

MIT News: Out of His room, In His Element: Jacob Collier Harmonizes With MIT