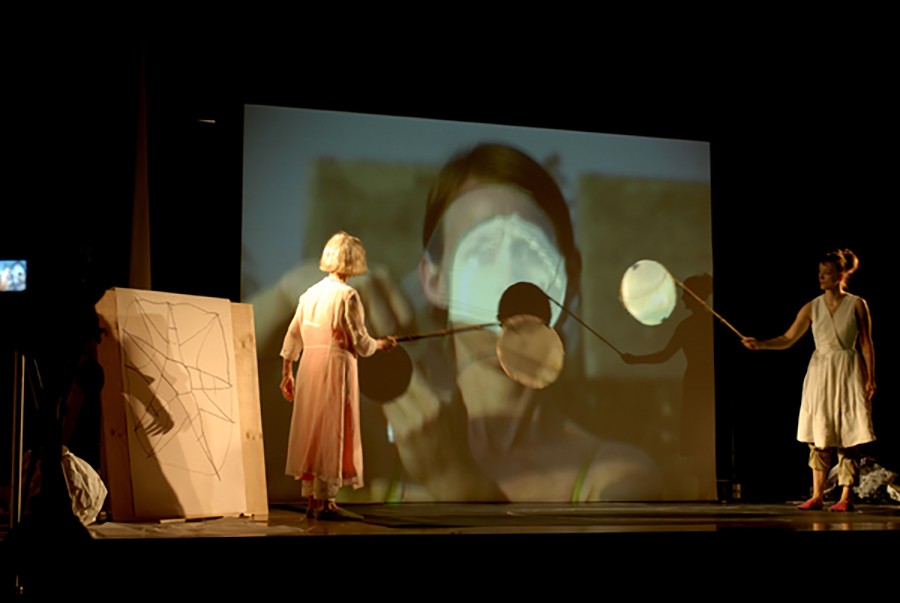 Influence is not thrust upon the follower from the side of the precursor. As art historian Michael Baxandall argues in his work Patterns of Intention, the later artist influences the way the work of the former is viewed through appropriation and engagement with the past.

To comprehend more fully Joan Jonas’s extraordinary impact in this sense, we have asked several of her former MIT students and colleagues to share lessons she taught them, which have manifested in their artistic processes or have made an enduring impression on them personally. Jonas’s approach to her classes, as these MIT alumni recall, was characterized by openness, boundless curiosity and vigorous exploration — attributes her students tend to cultivate in their own work habits.

In anticipation of her new work made for the US Pavilion as part of the 2015 Venice Biennale, it is an opportune time to reflect on Jonas’s lasting legacy at MIT. Jonas taught at MIT from 1998-2014 and is Professor Emerita in the MIT Program in Art, Culture & Technology (ACT), part of the School of Architecture and Planning. Her pioneering works in performance, video and installation, from the 1960s to the present, have secured her place in the art historical firmament. To be truly influential, however, an artist must inhabit the minds and inform the studio practices of other working artists – from their workaday problem solving to the heights of inspiration and every task in between.

In this interview series, several MIT alumni — including Pia Lindman, Grady Gerbracht and Sohin Hwang  — trace the lines of connection from their own art practices to the inimitable work of Joan Jonas.

Sohin Hwang graduated from MIT in 2011, with the degree of SMVisS (Science Master in Visual Studies) from ACT. She is currently a DPhil researcher at Ruskin School of Art in Oxford University.

Hwang is a performance and installation artist who is interested in “things that are invisible.” Both the practical and theoretical aspects of her doctoral research involve performative inquiries of systems and their vitality, with a focus on examples from British cybernetics and socialist information technology.

What class/classes did you study under Joan Jonas and when?

Do you remember what your expectations were? Was the subject something new to you or were you firmly involved in your art studies?

I only started art when I took a course at Harvard, which was led by artist Stephen Prina, who eventually recommended me to pursue art. At the time, I was in a design research program at Harvard’s Graduate School of Design, and I needed a studio environment that was open enough for me to experiment with and within. And, I found out studios in the art program suited my need better than the ones in design school, which can often have too clear a goal and expect you to achieve a specific result.

One year later, I came to MIT to explore art properly for the first time. So when I had Joan as my teacher, the field of performance was still very new to me. I was not even aware that I was studying with such an important artist, and I did not know what to expect, except that Performance Workshop would provide me with a totally different and fresh input — which it did.

To me, the workshop (Joan was reluctant to call it a course, although she was a very responsible instructor in the course) was about enabling the participants to sense, feel and work with space and time. I gained new senses. And this changed my general understanding of the world into something different.

Before meeting Joan, I had the vocabulary of logic and rational thinking mostly. To me, the subject was about learning a new vocabulary of the senses.

Are there any anecdotes you remember from the class, or from your fellow students, related to Joan Jonas’s instruction or critiques?

When I was in her 2010 Spring workshop, the ACT (VAP) program moved from N52 to the current location of Media Lab complex (E14, E15). It was the time we learned (had to learn, in a way) about the history of art at MIT and the relationship between CAVS, VAP, ACT, and Media Lab, which was still very much in a conflux. It was the first semester that Joan used the Cube (the basement of E15) as the space for her workshop. Although I was familiar with the previous usage of the Cube–occupied by the creative type Media Lab groups, full of toys, couches, plants, and a hanging elephant — the Cube became a totally different space once the art program occupied it. The space was emptied and equipped with some rolling walls and benches, so that it would always be ready for spatial experiment. It was a luxury, but none of us, perhaps including Joan, knew the potential of the space very well. So, we did a lot of exploration.

One of the experiences I remember in her workshop as a student is the session where we all were asked to walk in the space as slowly as possible. We would walk around the floor and the mezzanine, and go up and down between them. Through this session, we learned about the space and our own individual body, too. Because it turned out that we were all moving and responding very differently. I had the slowest body in the class, while some other people discovered an impulse to growl and make sound.

Another experience I remember is from the period when I was her TA. One of my tasks was to prepare the space — to make the spatial arrangement of the Cube in a way I liked every week. I wondered at first, because I do not remember her previous TA doing this. However, throughout the semester, I increasingly liked this task because it was a very playful approach to maintain the critical view of the space that we repeatedly occupied. I just enjoyed arranging the walls and lighting differently, discovering new and unlikely things from the space and pleasing myself, and of course Joan and the class, with a different environment to work in every week.

Joan also enjoyed playing recorded music during the workshop, which enriched and expanded the sense of space and time. When she was asking me if Nam June Paik would be good for the day, I would say that it was probably too romantic and suggested Tony Conrad or Pauline Oliveiros instead. Such an experience I remember with a smile, for a few years before I worked with Joan, I had stopped listening to music because my ears got tired very easily due to the stress I had been accumulating from my other past experiences. She kind of cured my disease a little bit, too.

When critiquing, Joan was very accurate and affirmative. While she had a very pretty firm personal account of her own art, she respected her students as colleague artists, too. I think this was the quality that prevailed in ACT community then, for which I still feel grateful.

Did you find some of the lessons applicable to other coursework (perhaps non-art related subjects)?

The train of sensory acuity, perhaps. By which I mean that other coursework in other fields can benefit from incorporating some kind of elements where students can learn how to attend to sensory stimuli using their natural physical organ. (i.e. how to look at very small things or very large things… how to listen to very low sound… how to feel time and space, etc. )

Was there any stand-out piece of advice about the way to approach art making, a particular medium or process, or life in general?

How did her instruction affect your art practice, both then and now?

Although I think my practice is quite different from hers in terms of process or form, I still think a lot about how she responded to my finished and unfinished works back at the time. I keep referring to Joan in my writing too.

I consider all my projects as performance even when they do not necessarily look like performance. I don’t think my works were influenced by Joan’s works formally. But when I am working, I often think of Joan as an imaginary interlocutor.