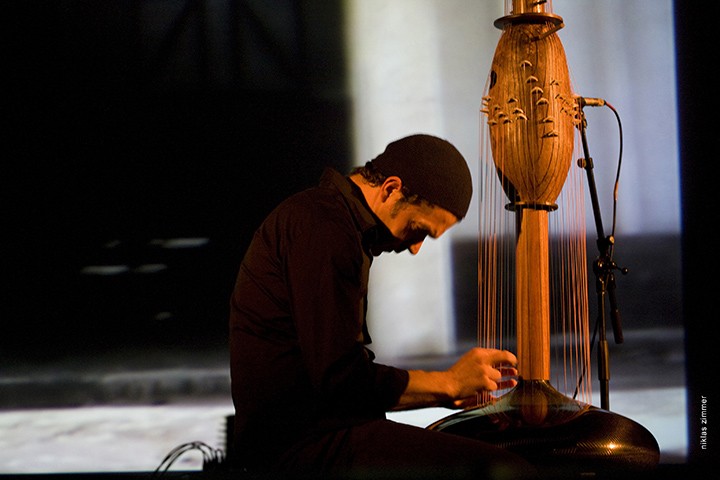 Victor Gama is a composer whose process begins with the creation of an entirely new instrument, one whose design is steeped in symbolic meaning. Concept design, the selection of materials, fabrication, and scoring is all part of the rigorous way Gama creates new music for the 21st century, blending current fabrication technologies with ideas, materials, and traditions inspired by the natural world. From March 2-7, Gama shared his visionary work with the MIT community: performing in a concert, visiting classes and dorms, and presenting a lecture/demonstration for the class “Music and Technology.”

In each of these contexts, people gravitated towards his instruments as if attracted by a magnetic force. The post-digital world, Gama said, has circled back to the object. “The same technology that has dematerialized the object is working to rematerialize the object,” Gama said in his lecture/demonstration. Innovations like 3D printing and digital CAD modeling have brought the object back to center stage after becoming seemingly obsolete with advances in file sharing and the creation of digital libraries. It is about being human, Gama said, and finding ways to merge the virtual and physical worlds in profound new ways. “Can an instrument be a living organism?” he asked, “Can it learn? Can it interact?”

In Gama’s philosophy — heavily influenced by the pre-colonial architecture and cosmology of his native Angola — the instrument is a ritual form, a container of meaning whose design reflects a constellation of allusions to stories, beliefs, and social and natural events. The instrument is not just an instrument, but a “symbolic system” and “semiotic interface” created by the composer. With the greater control afforded by digital technologies, these symbolic systems can become more finely tightened and tuned, actualizing a geometry as complex as their concept.

His instrument, “Toha,” for example, was inspired by the nest of the weaver bird. “One of nature’s most astounding installations,” Gama said. The harp-like instrument is meant to be played by two people, just like the many birds who would make a home in the nest. During the military upheavals in Angola from the late 70s onwards, “the nests were totally empty, you couldn’t see any birds. They all had migrated because of the conflict,” Gama said. Like these densely woven nests, Gama’s work — both the instrument and the resulting music — weaves together the complex strands of the cultural, social, spiritual, and natural.