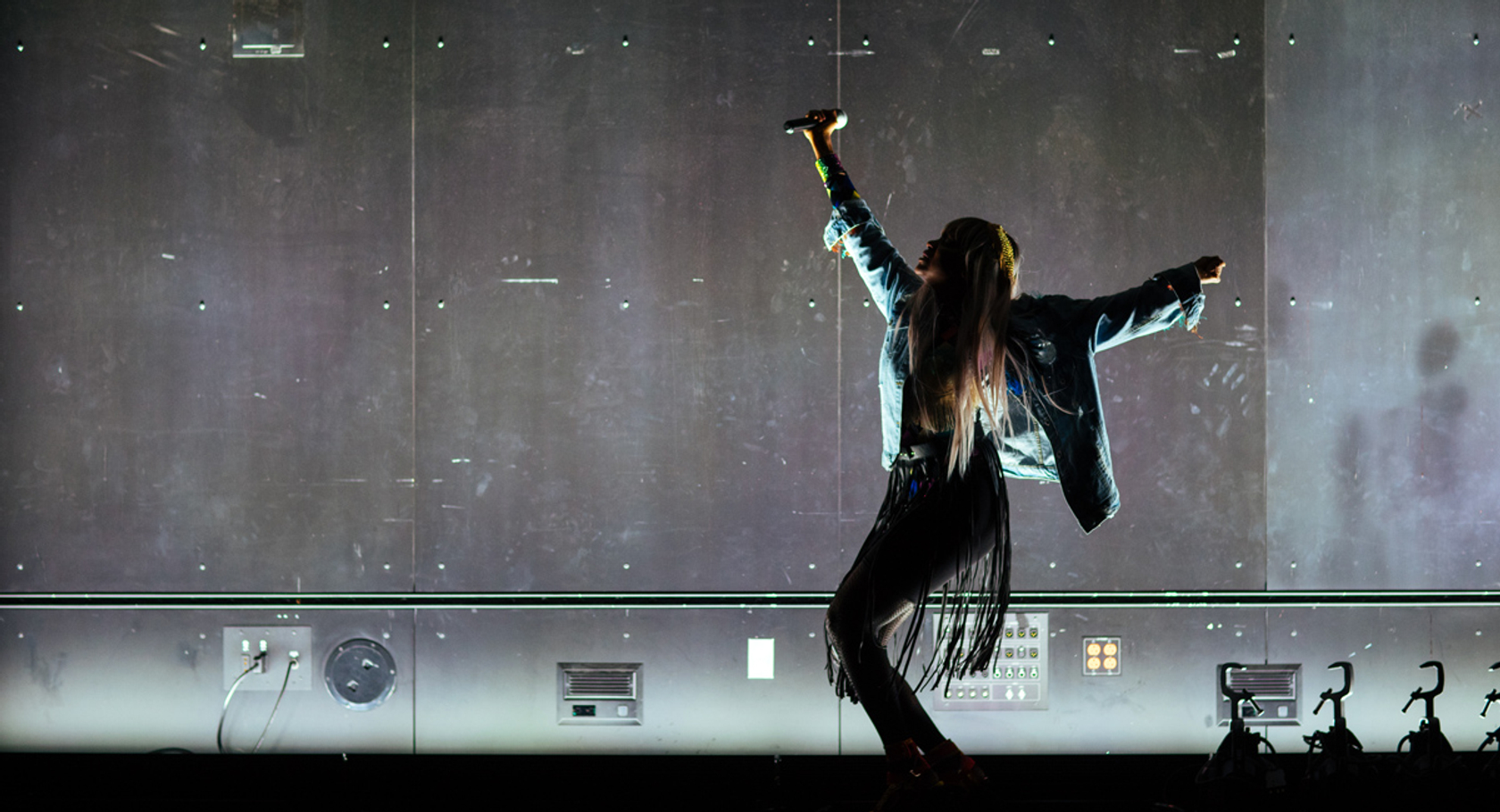 a glamazon hip-hop icon who exists, like Tinkerbell, only to the extent that you believe in her and clap your hands.”
— The New Yorker, January 2018 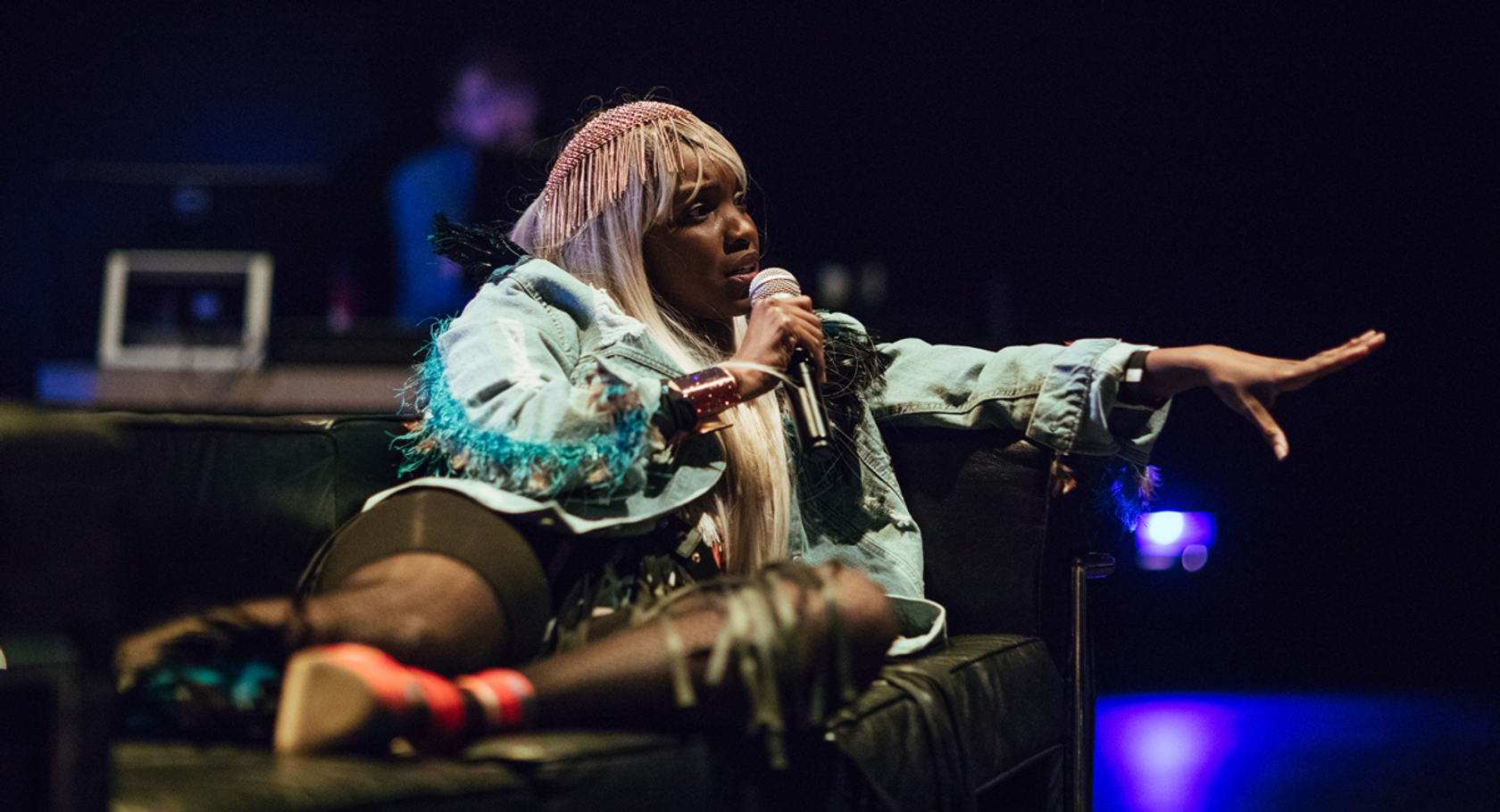 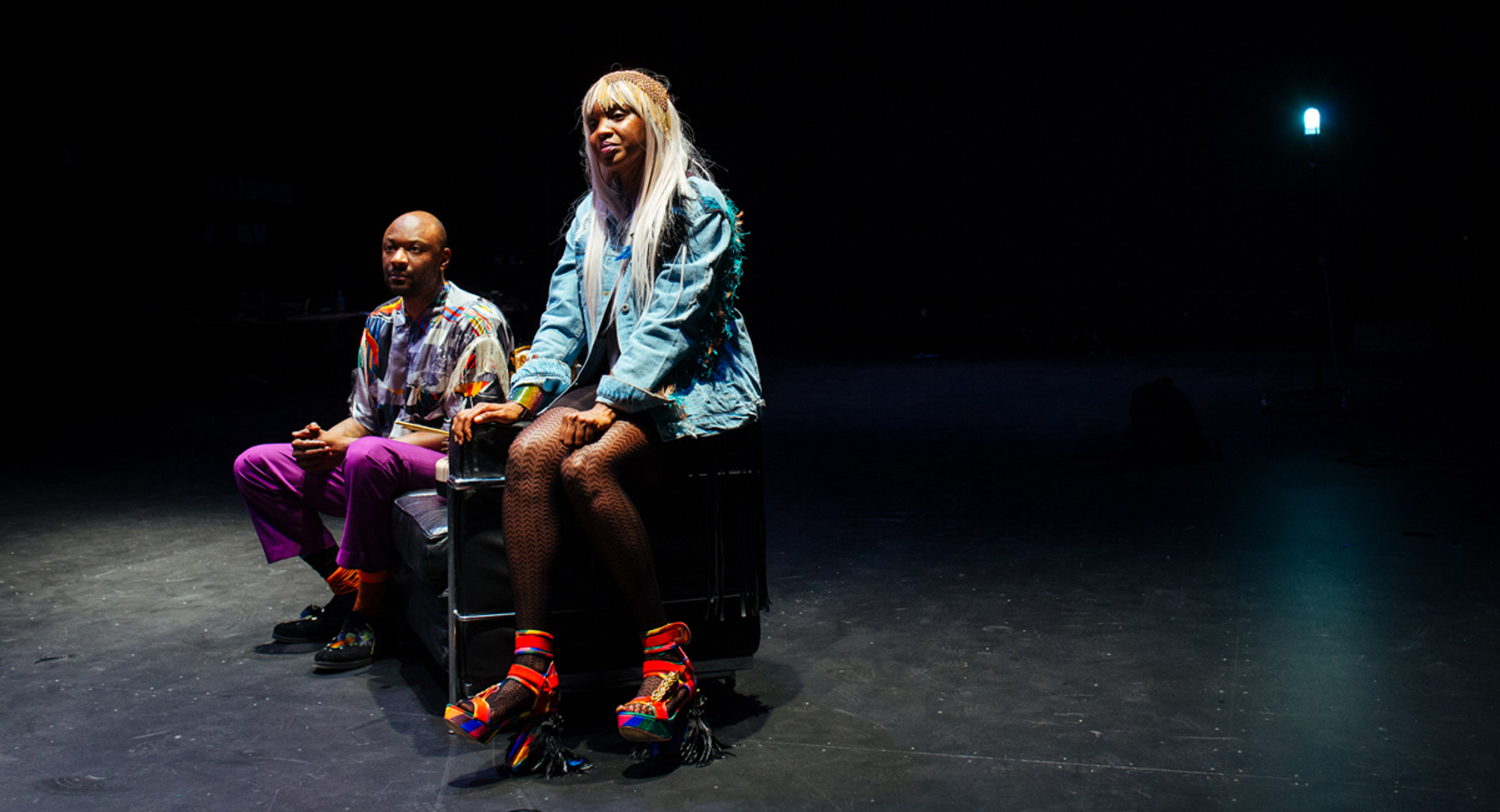 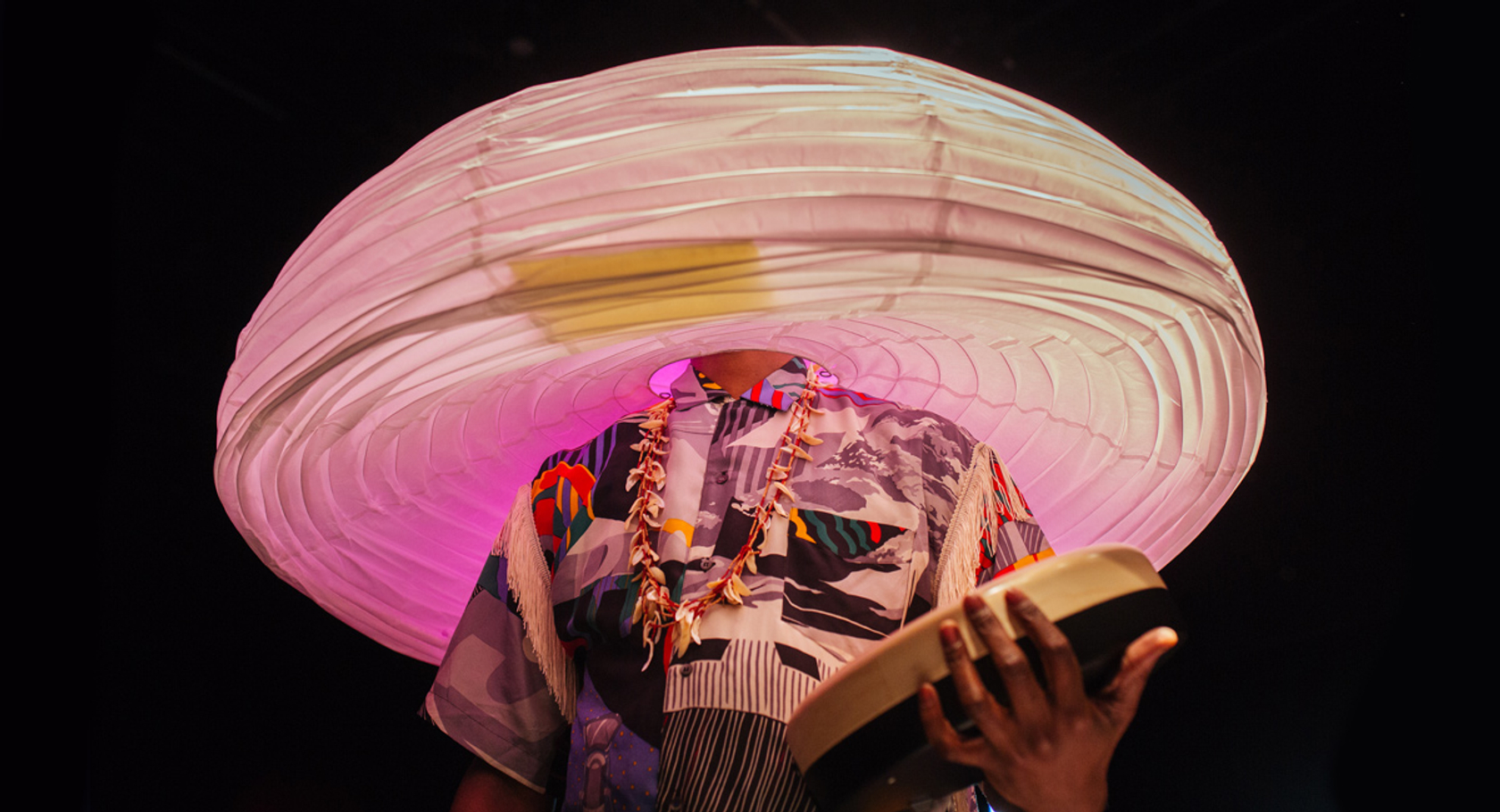 As part of MIT Performing‘s 2020-21 season, Ayesha Jordan and Justin Hicks return to explore a world that has been turned upside down along with many of our plans, schemes, and dreams. “Glamazon hip-hop icon” Shasta Geaux Pop (“close friend” of artist Jordan) had a dream deferred, and now she needs therapy. In the video Blended Therapy, Shasta reflects and journeys with her partner J.U.S.E. (Hicks) looking for connections through a sonic and visual exploration of the unseen parts of Shasta’s psyche. Check your body at the door and let your mind unwind while Shasta and J.U.S.E. create an atmosphere of electric sounds and charged energies.

Jordan joined the Shed family of artists as a member of the first cohort of Open Call participants. When her commission was delayed due to the pandemic, she re-envisioned her performance for a virtual audience. Jordan and Hicks will use this residency to research existing online platforms and blog-style gathering spaces to aid in the development of a webspace that would allow further engagement with their work Blended Therapy.

During her week-long residency at MIT in February 2019, she developed a new work with her collaborator Hicks, working with students and presenting a work-in-progress showing on February 15, 2019 of Line by Line.

In this residency, Jordan and Hicks explored themes related to the excavation of heritage and blended traditions specifically related to African-American and creole cultures of Louisiana. The work forms a backdrop to compose music, lyrics, and text incorporating the sounds of creole music culture, zydeco, and New Orleans bounce, as well as elements of second lines.

The research collected and material developed throughout the residency serves as the foundation for Jordan’s project Shasta Geaux Pop: The Return Remixed, premiering in The Shed’s inaugural season in 2020. Shasta is planning a vibrantly razor-sharp comeback that is audacious and full of surprises. Paying homage to her southern roots while acknowledging the contradictions they play in her present. This residency supplies the blueprint for this anticipated performance.

Ayesha Jordan comes to MIT as part of the 2020-2021 and 2018-19 MIT Performing Series, a prototyping and presenting series curated by Jay Scheib, professor for Music and Theater Arts, and presented by the MIT Center for Art, Science & Technology. MIT Performing promotes a research based artistic practice and serves as a new platform for contemporary performance. MIT Performing is supported in part by the Council for the Arts at MIT.

Line by Line explores the excavation of heritage and blended traditions specifically related to African-American and creole cultures of Louisiana. Ayesha Jordan and collaborator Justin Hicks use their research as a backdrop to compose music, lyrics, and text incorporating the sounds of creole music culture, zydeco, and New Orleans bounce, as well as elements of second lines.

This Work-in-Progress Showing supplied the blueprint for Jordan’s project Shasta Geaux Pop: The Return Remixed premiering in The Shed’s inaugural season in 2020.

Ayesha Jordan (Co-creator and Writer) is a multidisciplinary performance artist who often uses characters and stories to create indelible moments for cerebral and visceral experiences. Her practice has taken her to various cities and countries around the globe. She and her collaborators have been making art together for several years, producing innovative theater and music events in NYC and beyond described as edgy, dynamic, and hilarious. Called a “Glamazon Hip-Hop Icon” (The New Yorker), Shasta Geaux Pop has appeared at the Public Theater/Under the Radar Festival, the High Line, the Wow Festival, Off Center Festival, Contemporary Arts Center, the Bushwick Starr, and the Right About Now Festival (Amsterdam) among other spaces. Other works include Come See My Double Ds (JACK NY), Social Studies (Danspace NYC), Enter & Exit: Playing House, and Enter & Exit: Family Reunion. Some of her video projects include Living Room Dance Breaks, Drunk & Famous, and Shasta Geaux Pop for President 2020.

Justin Hicks (Co-creator and Composer) is a multidisciplinary artist and vocalist who uses music and sound to investigate identity and value. As a composer and performer, his work has been featured at The Shed, Lincoln Center for the Performing Arts, Performance Space New York, the Public Theater, JACK, Paisley Park, the Whitney Museum of American Art, the High Line, and the Institute for Contemporary Art (Philadelphia) among many other venues. Hicks has collaborated with notable visual artists, musicians, and theater-makers including Abigail DeVille, Kaneza Schaal, Cauleen Smith, and Helga Davis and is a member of the HawtPlates. In 2018, he was nominated for a Drama Desk Award for his work as the composer of Mlima’s Tale by Lynn Nottage (The Public Theater, dir. Jo Bonney). Hicks was born in Cincinnati, Ohio, raised in Lafayette, Indiana, and is based in the Bronx. Justin is a founding member of the HawtPlates with his sister Jade Hicks and wife Kenita Miller-Hicks.

David Sainté (Video Designer) is a music video director and new media artist based in Brooklyn, New York. Sainté made his directorial debut with the short film The Pact in 2008. The film was selected for the Long Island International Film Expo and was also screened at the Anthology Film Archives. Sainté has won the grand prize at the first Silver Sounds Showdown Music + Video Festival in 2009 for the music video Insomnia by the Sleepwalkas. He also made the official selection for the Los Angeles Music Video Festival for his follow up music video, Teenage Whore, by the band Dinosaur Feathers. This music video was produced by Silver Sounds Studios in 2010. Sainté currently teaches digital media and contemporary art to the youth of Brooklyn for the nonprofit Bric Arts Media. After the catastrophic 2010 earthquake in Haiti, Sainté had the opportunity to travel to Haiti with a group of first responders. He is currently working on a documentary seeking to tell the story of a Haitian American returning to the native land of his parents in the wake of the devastation.

“All pop stars are constructs, but that’s especially true of Shasta Geaux Pop, a glamazon hip-hop icon who exists, like Tinkerbell, only to the extent that you believe in her and clap your hands.”

“Their [Ayesha Jordan and Justin Hicks’] work transcends genres, borrows from various performance styles and disciplines, and provides a uniquely shaped social commentary on the most relatable issues.”