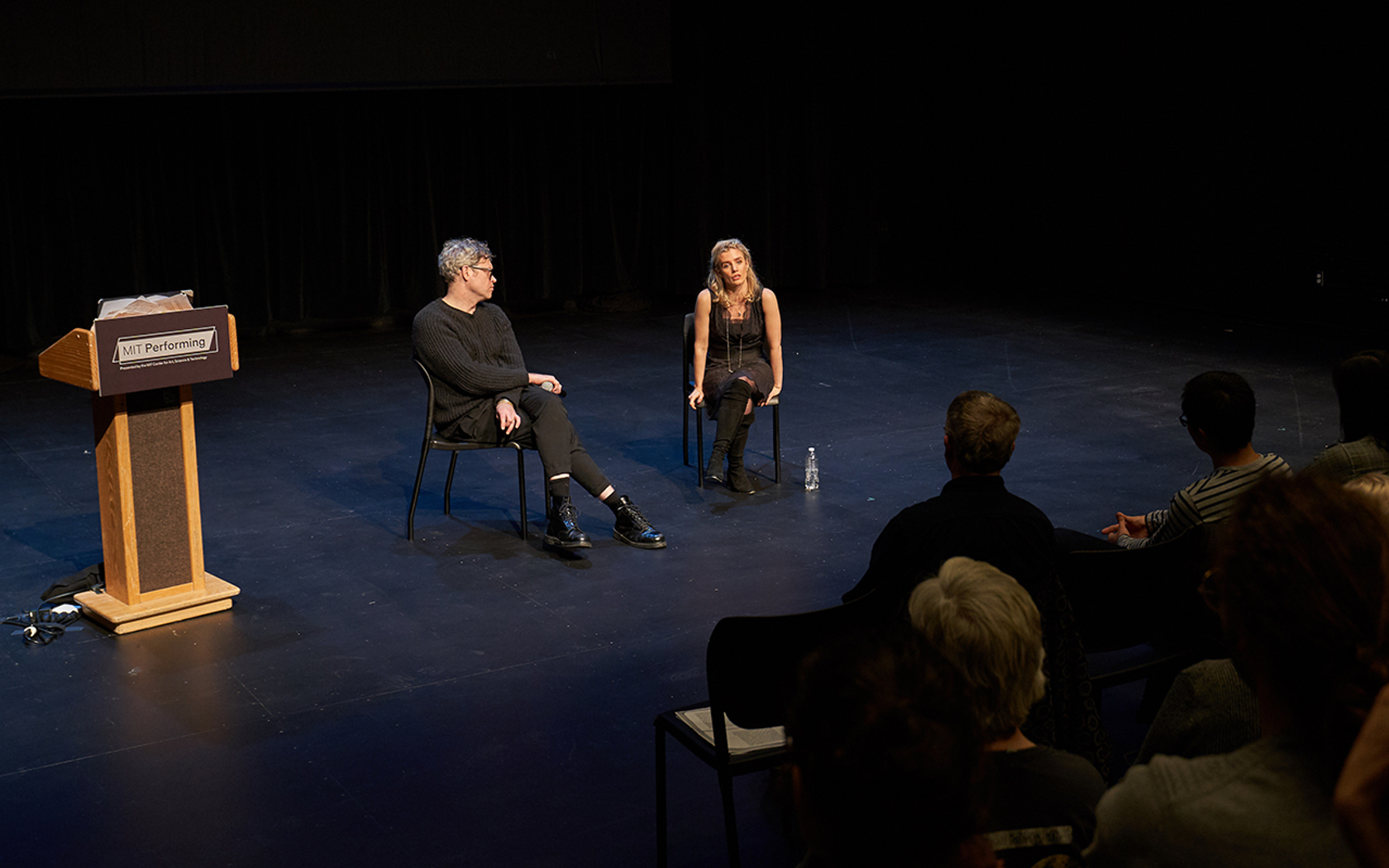 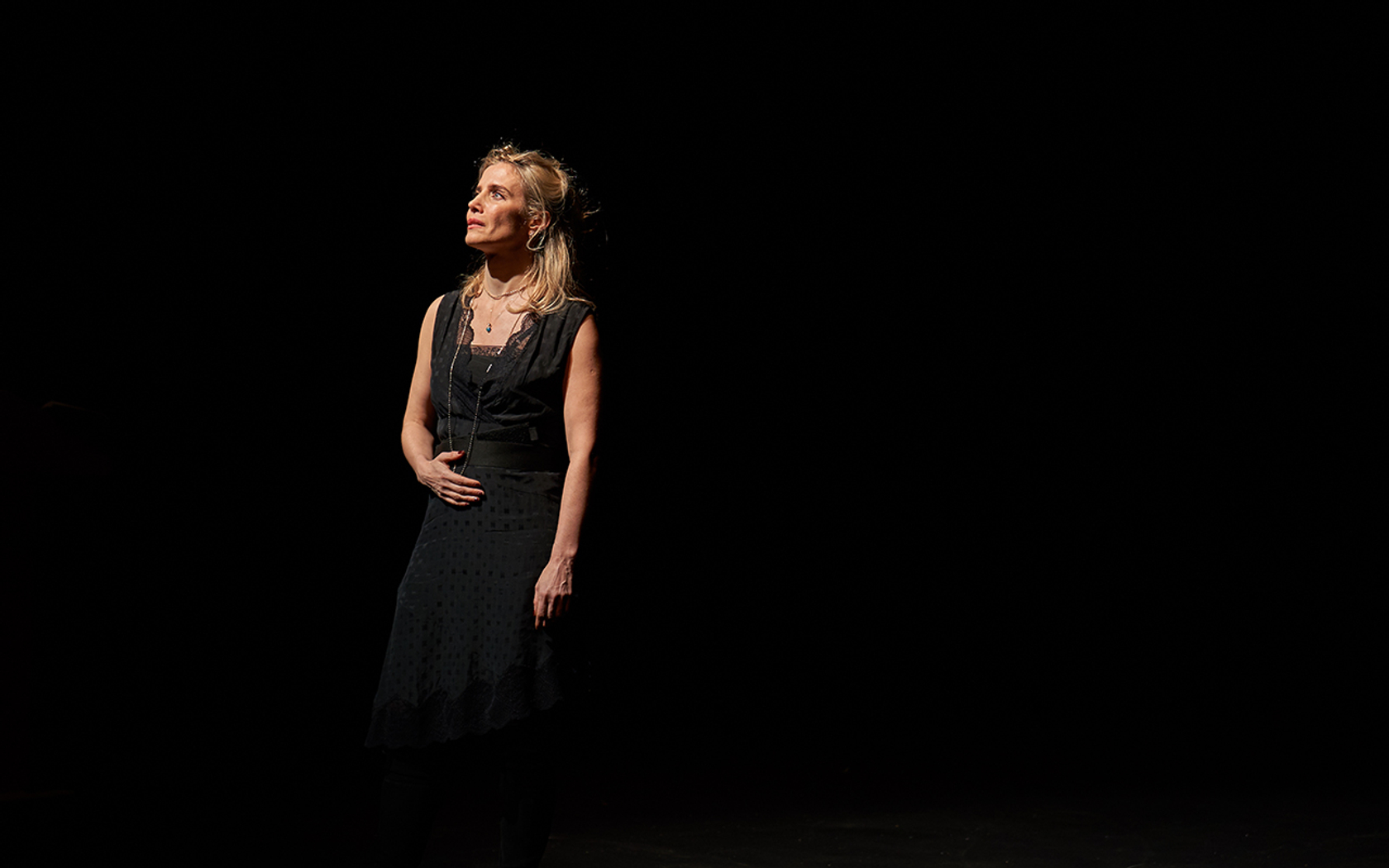 "Where the magic happens is where it does cost me a bit. Where I wrap my own real wounds, and things that I know in my cells, around Beckett's taut tempo.
— Lisa Dwan 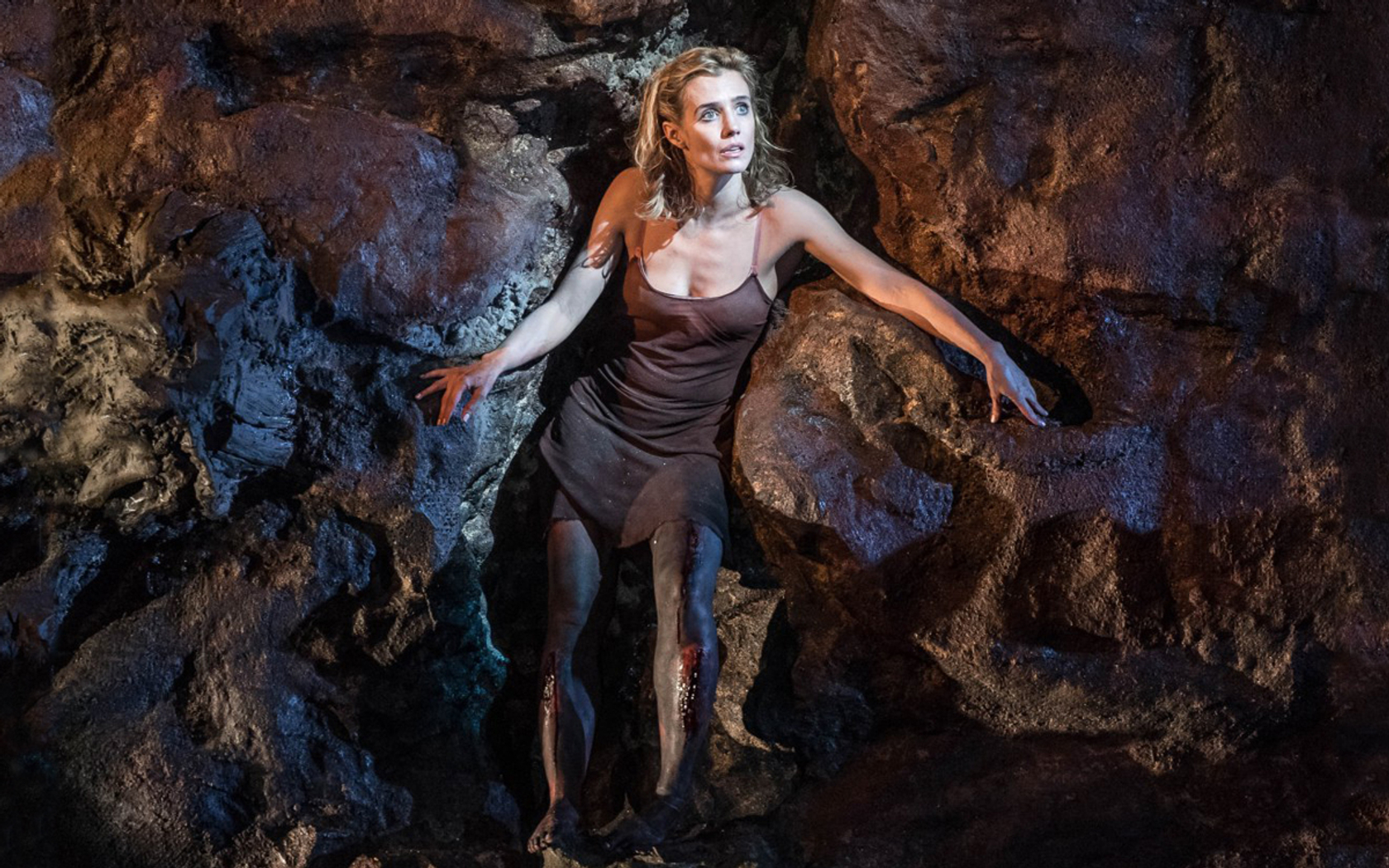 "She can swoop and pounce with sardonic derision."
— Paul Taylor, The Independent

Lisa Dwan’s performance at the Old Vic Theatre of "No’s Knife," a selection of Samuel Beckett’s ‘Texts for Nothing’ (1950-52). Photo: Manuel Harlan. 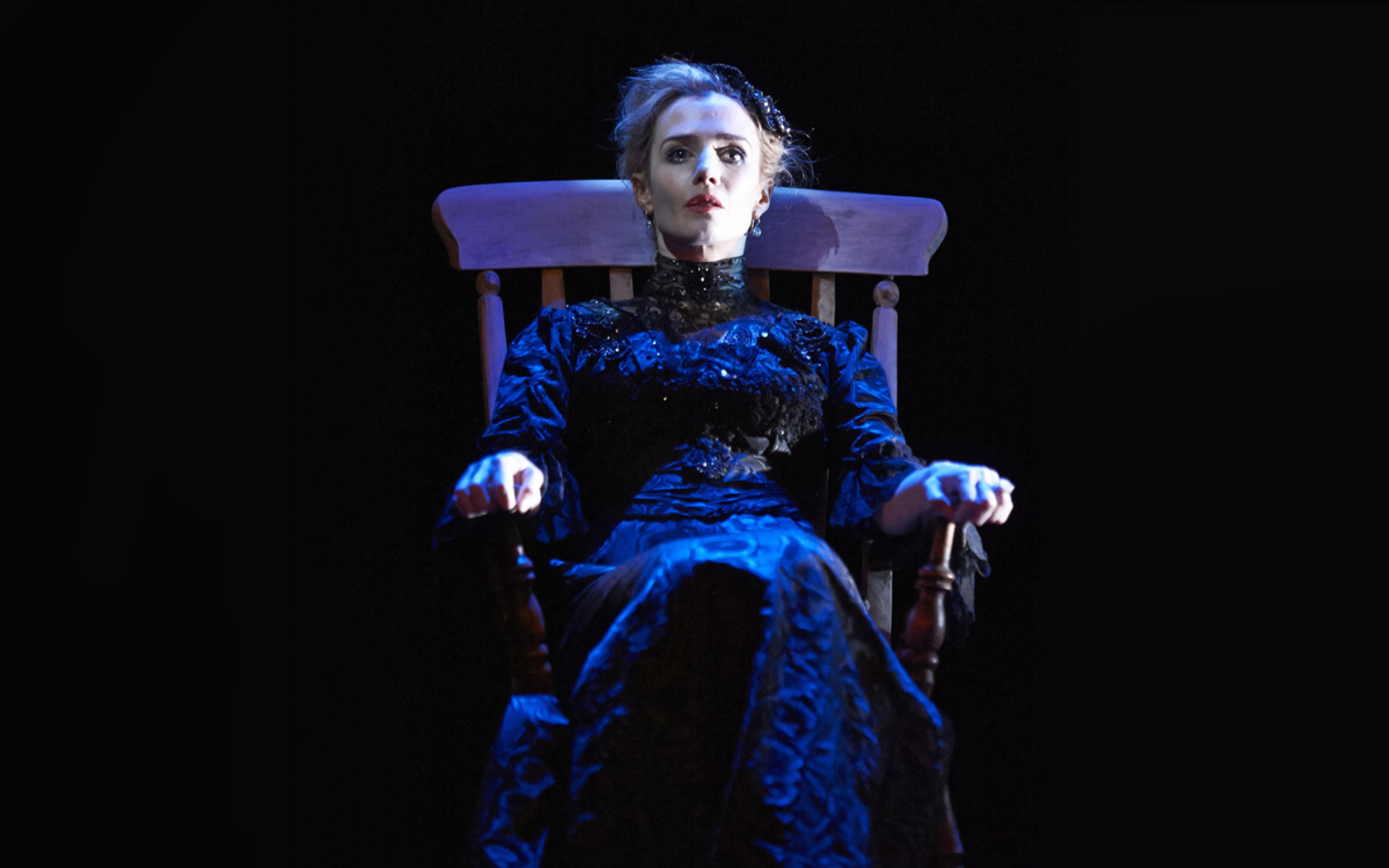 "...an instrument of Beckett.
— The New York Times

"...an instrument of Beckett.” - The New York Times

Acclaimed Irish actress, producer, and director Lisa Dwan is the 2019–21 CAST Mellon Distinguished Visiting Artist. As part of the inaugural 2018–19 MIT Performing series season, Dwan presented “A Body of Beckett,” a lecture/demonstration in which she examined the role of dance in Beckett’s work, and the conversations he was having with the human body. As the Mellon Distinguished Visiting Artist, Dwan works with faculty members across the Media Lab, Literature, and Theater Arts departments to further her explorations of the intersection of text, live performance, and technology.

Dwan has produced three short, one-woman Beckett plays: Not I, Footfalls, and Rockaby; and co-directed her performance of Beckett’s Texts for Nothing, the first performance of that work by a woman. In 2016, Dwan conceived and performed No’s Knife, 13 fragmented prose pieces selected and arranged by the actress from Texts for Nothing. These interior monologues push language to the brink of breakdown, unlocking Beckett’s contemporary relevance to gender, identity, and the human condition.

Lisa Dwan comes to MIT as part of 2019-20 and 2020-21 MIT Performing, the prototyping and presenting series programmed by Jay Scheib, professor for Music and Theater Arts, and presented by the MIT Center for Art, Science & Technology. MIT Performing promotes a research based artistic practice and serves as a new platform for contemporary performance. MIT Performing is supported in part by the Council for the Arts at MIT.

Finding Connection Through Mediated Performance: A Conversation with Lisa Dwan
May 14, 2021 / 3:00pm
The event will be streamed live on Zoom: register here for the link

CAST Mellon Distinguished Visiting Artist Lisa Dwan discusses the limitations and opportunities inherent in developing performances for the camera, in both film and virtualized theater. Dwan discusses her recent work on Pale Sister, Colm Tóibín’s adaptation of Sophocles’ Antigone, and BBC’s new television thriller Bloodlands, exploring how she creates powerful recorded performances and finding ways to capture the intimacy and depth of connection inherent in live theater in a more hybridized format.

Watch a Clip from the Classroom

Lisa Dwan is an Irish performer, director, and writer. Having originally trained in the UK as a ballet dancer, including dancing with Rudolf Nureyev in Coppélia in Dublin and with Lewis London Ballet, she began acting professionally in her teens. She has worked extensively in theater, film, and television, both internationally and in her native Ireland.

Dwan is currently starring in the new Netflix series Top Boy. She was last seen on the  stage starring in Harold Pinter’s The Lover and The Collection at the Shakespeare Theatre Company in Washington, DC. 2019 marks the world premiere of Pale Sister, an adaptation of the Antigone myth written for Dwan by the Irish writer Colm Tóibín.

Recently, Dwan completed a world premiere of a one-woman production of her own adaptation of Samuel Beckett’s 1950s prose text No’s Knife at the Old Vic, London and the Abbey Theatre, Dublin. Prior to this, Dwan performed around the world in “The Beckett Trilogy” of Not I/Footfalls/Rockaby (Royal Court, West End, Barbican Centre, Southbank Centre, Brooklyn Academy of Music, Paramount Theatre in Boston, Skirball Center NYC, The Broad in Los Angeles, Perth Festival, Paris, Hong Kong, Berlin, Toronto, Dublin, Belfast, Galway, and a sell-out UK Tour). Other recent theater includes: world premiere in the title role of Anna Karenina in a new adaptation by Marina Carr for the Abbey Theatre, Dublin; Shining City (Off-Broadway, Irish Repertory Theatre); Text for Nothing (White Light Festival, Lincoln Center); Not I (Royal Court Theatre London); Beside the Sea (Southbank Centre, London); Margot, Diary of an Unhappy Queen (Barbican Centre, London); The Journey Between Us (Southwark Playhouse, London); Ramin Gray’s production of Illusions by Ivan Viripaev (Bush Theatre, London); Not I (Southbank Centre, London); My Dear Bessie: Letters Live with Benedict Cumberbatch (Hay Festival and West End); The Soldier’s Tale (Hay Festival); Not I (BAC London); The Importance of Being Earnest (Irish tour); The History of the World at 3am (Andrews Lane Theatre, Dublin); and As You Like It (Galway Arts Festival). Film credits include: Trust by Danny Boyle, An Afterthought, Walt Disney’s Oliver Twist, The Tailor of Panama, and Bhopal – A Prayer for Rain. Television credits include: Ovid (BBC), Not I (Sky Arts), Rock Rivals (ITV), Big Bow Wow, Fair City (RTÉ), and Mystic Knights (Fox).

Dwan writes, presents, lectures, and teaches regularly on theater, culture, gender, and Beckett (BBC radio and television, NPR, The Guardian, The Telegraph, École Normale Supérieure, Trinity College Dublin, Reading University, Oxford University, Cambridge University, and Princeton University). She recently completed a documentary for the BBC on Beckett and Dante, and has been commissioned to write a book on Beckett for Virago. In 2017, she held the Atelier residency at Princeton University teaching a course on Beckett’s prose.

Lisa Dwan was a fellow at The Center for Ballet and the Arts at New York University and a distinguished artist in residence at Columbia University, where she developed a new theater piece with Margaret Atwood based on Medea.

“This is a marathon – a feat of memory, dedication, and courage – a triumph for Lisa Dwan.”

“Dwan brings out all the passion, wit, and anger in the script in a remarkably vigorous feat of vocal virtuosity. She can swoop and pounce with sardonic derision.”

“Ms. Dwan, you see, is an instrument of Beckett, in that way saints and martyrs are said to be instruments of God.”

Bomb Magazine, “Finding the hope in the one-woman plays of Samuel Beckett”

The Guardian, “No’s Knife review – a marathon and a triumph”

The Boston Globe, “Time is of the essence in a mesmerizing Beckett trilogy”

Lisa Dwan’s performance at the Old Vic Theatre of "No’s Knife," a selection of Samuel Beckett’s ‘Texts for Nothing’ (1950-52). Credit: Manuel Harlan.

Flickr: Photos from Lisa Dwan's "A Body of Beckett."