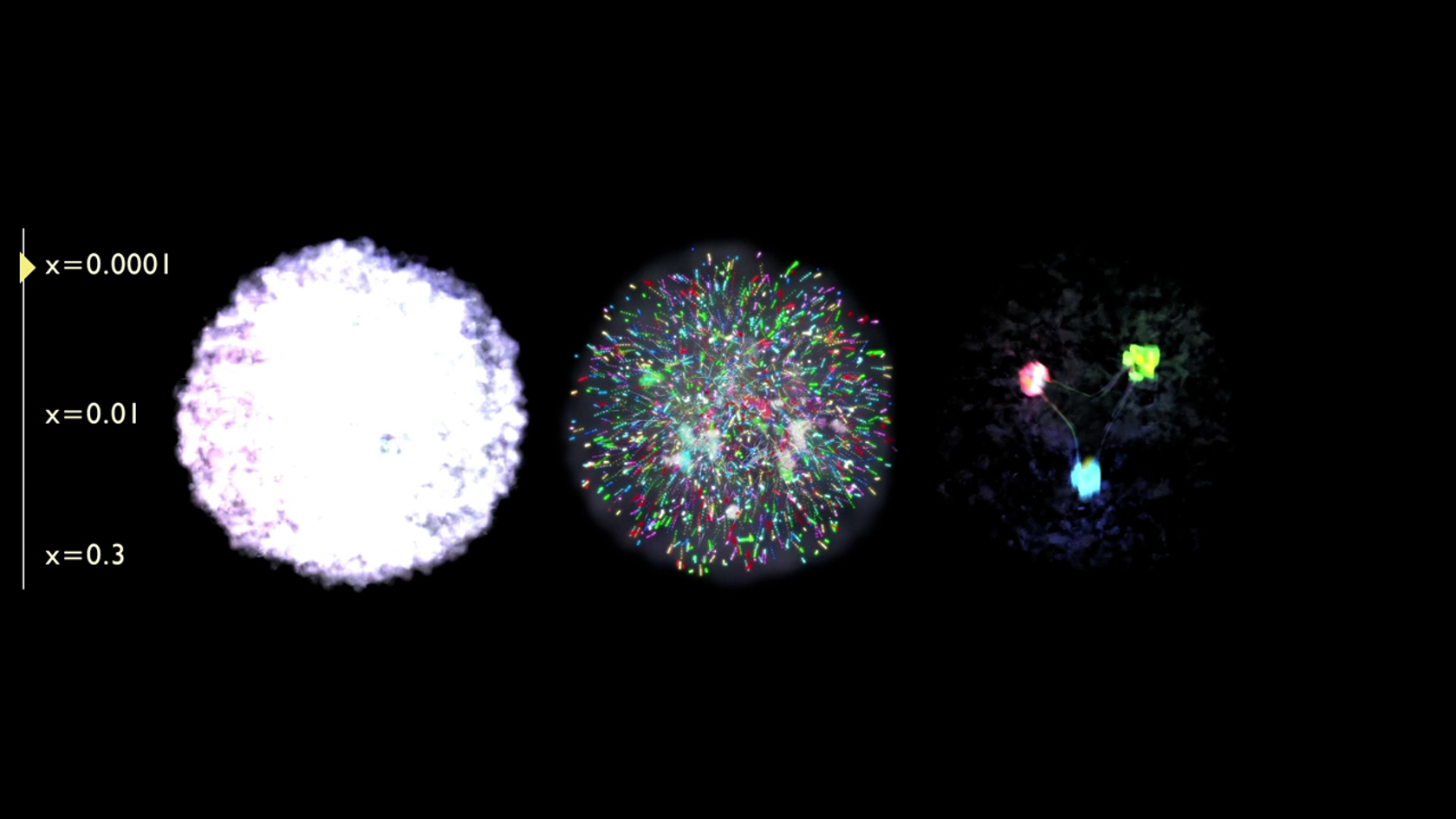 Physicists have developed the “Standard Model” that successfully explains atomic structure. In this framework, the proton is built from point-like quarks and gluons. The proton has almost universally been visualized as a billiard ball with quark and gluon billiard ball constituents. Yet, we now know that this visualization is entirely wrong. Quarks and gluons can spin, have linear and circular motion, and can appear and disappear. How can this complex and seemingly “impossible” world be visualized?

To answer this question, MIT Physics professor Richard Milner, physicist Rolf Ent at Jefferson Lab, documentary filmmakers Chris Boebel and Joe McMaster at MIT, and animator James LaPlante of Sputnik Animation have taken inspiration from the colorized Hubble images of the large-scale structure of the universe from original black-and-white exposures. The creators of these images describe them as “equal parts art and science.” This project’s goal is to create similarly scientifically authentic, visually inspiring images of the microcosm and explore the creative process, the challenge of scientific “accuracy,” evidence, and the very concept of “understanding.” Milner and his colleagues are motivated by new and planned electron accelerators that aim to deliver snapshots of the fundamental structure of matter with unprecedented clarity.

In Visualizing the Proton, physicists worked collaboratively with animation and video artists to depict the subatomic world in a new way with an innovative animation that conveys the current understanding of the structure of the proton in terms of its fundamental constituents. The animation was centerpiece of a 5–7 minute film that aimed at grades 7–12 science students and the general public.

MIT Professor Krishna Rajagopal, MIT Professor Richard Milner, physicist Dr. Rolf Ent from Jefferson Lab, MIT documentary filmmaker Chris Boebel, animator James LaPlante of Sputnik Animation, and Leila W. Kinney of the MIT Center for Art, Science & Technology gathered for the public premiere of their new animation of the proton and a discussion of the process of its creation.

Richard Milner, Professor in the MIT Department of Physics since 1988, did his undergraduate studies at University College Cork, Ireland, and received his PhD in 1985 from Caltech. His research focuses on understanding nucleon and nuclear structure using the lepton probe, frequently using spin observables and over the energy range of 2.5 MeV to 27 GeV. He has proposed and led experiments at SLAC National Accelerator Laboratory, Indiana University Cyclotron facility (IUCF), MIT, Deutsches Elektronen-Synchrotron (DESY), and Jefferson Lab.

Chris Boebel, Media Development Director, is a filmmaker based at MIT, where he is media development director at the MIT Office of Open Learning and teaches documentary filmmaking. He is the writer/director of many short films and videos and three feature films, including Exit Zero: An Industrial Family Story. His work has screened at more than 50 film festivals, including the Sundance Film Festival, and has received many awards including a New England Emmy.

Joe McMaster is an award-winning documentary filmmaker and science journalist and the Senior Producer at MIT Video Productions (MVP). Prior to joining MVP and making videos about all things MIT, he worked for more than two decades as a television producer, director, writer, series producer, and executive producer – much of that time on staff at the PBS science series Nova.

James LaPlante is the CEO and creative director at Sputnik Animation, an Emmy-award winning animation studio in South Portland, Maine. He has over 25 years of experience in media production working as a writer, producer, director, editor, animator and interactive designer. He has produced animation for award-winning documentaries for clients such as WGBH NOVA, National Geographic and the Discovery Channel. Through Sputnik Animation, LaPlante continues to explore new technologies and creative approaches to communication through immersive media and Virtual and Augmented Reality.

The Visualizing the Proton Project is presented by the MIT Center for Art, Science & Technology, Jefferson Lab, and US Department of Energy’s Office of Science.

Scientific American: The Experiment That Will Probe the Deepest Recesses of the Atom, June 2019

Article: “Visualizing the Proton” Through Animation and Film

Video: Visualizing the Proton: A Documentary