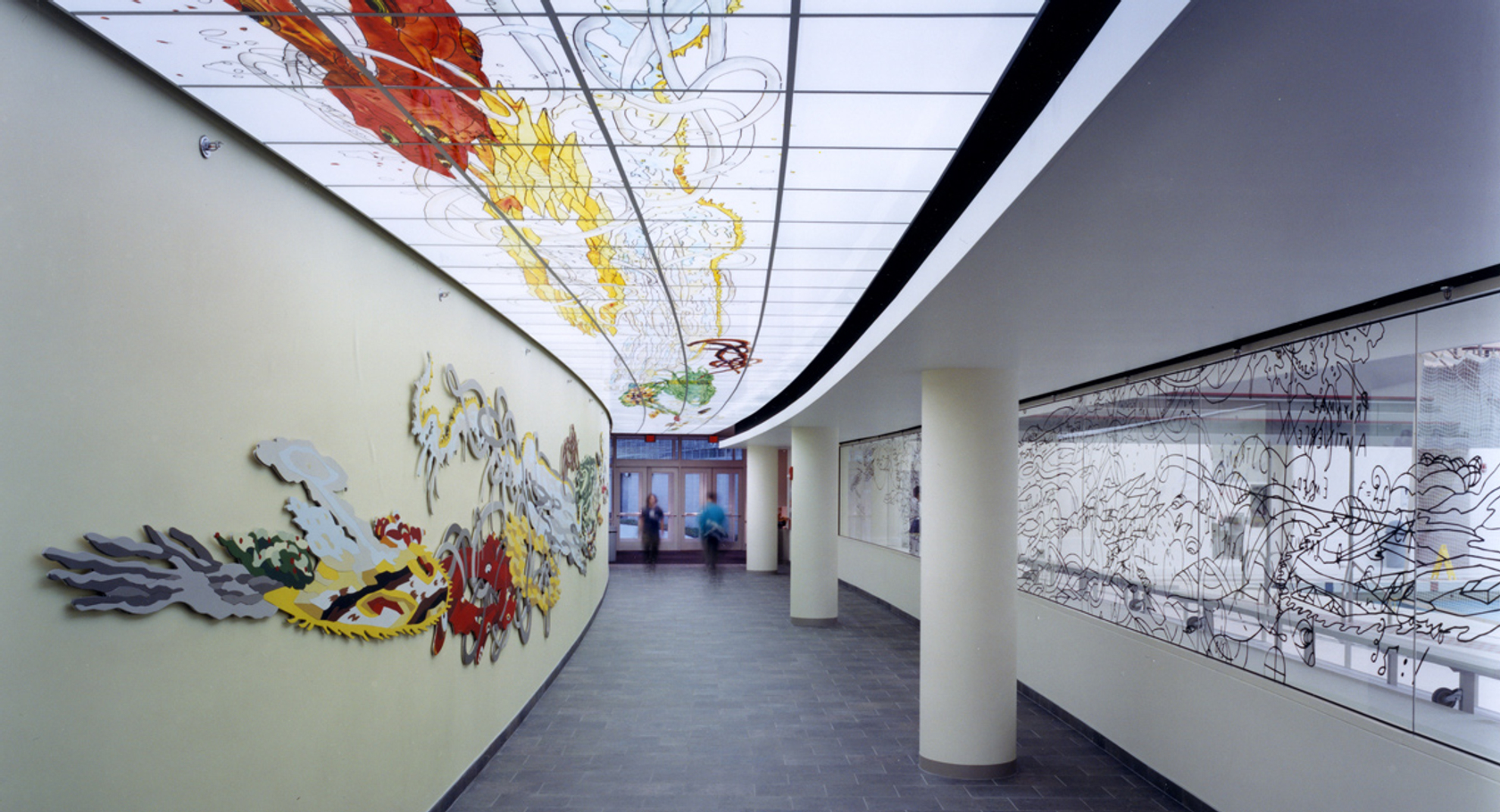 "He's known for his interest in tracing the development of systems, ideas, and theories by way of his artistic practice."
— Art News Artistic explorations of existence and scale

Matthew Ritchie at the ICA, where the British-born, New York-based artist had an 18-month residency. Credit: Aram Boghosian for The Boston Globe.

Matthew Ritchie is a contemporary artist based in New York who works in installation, performance, painting, drawing, sculpture, and sound. Ritchie’s work addresses questions about the nature of the universe and our understanding of it, and asks what these enigmas might look like when manifested through artistic creation.

As the 2018–21 Dasha Zhukova Distinguished Visiting Artist, Ritchie creates a new transmedia work in collaboration with a multidisciplinary team of MIT artists, faculty, and students. This new collaborative work takes inspiration from the “invisible college” of MIT: the interactions, discussions, and thought processes that take place outside of the formal classroom and administrative structure of the Institute. The Invisible College takes shape as a VR experience and film featuring music by Evan Ziporyn. The visuals and soundscape draw on datasets representing scales of the universe—from nanoparticles to dark energy—reinterpreted by Generative Adversarial Networks (GANs), a class of machine learning systems.

Register to receive a Zoom link

Caroline Jones, Professor of History, Theory and Criticism of Architecture and Art

Matthew Ritchie was born in London, England, in 1964, and lives and works in New York. He received a BFA from Camberwell School of Art, London, and attended Boston University. His artistic mission has been no less ambitious than questioning the various systems we use to represent and visualize the universe and the relationships between the structures of knowledge and belief that we use to understand it.

Matthew Ritchieʼs installations integrating painting, wall drawings, light boxes, performance, sculpture and moving image are investigations into the complex and transient nature of information. His works describe generations of systems, ideas and their subsequent interpretations in a kind of cerebral web, concretizing ephemeral and intangible theories of information and time. Ritchie has engaged in many cross-disciplinary collaborations, extending his own projects to explore the possibility of shared systems and aggregations in contexts as diverse as opera, contemporary music, architecture, horticulture, urban design, theology and science.

Ritchie has had over twenty-five solo exhibitions throughout his career. Ritchie’s work has been exhibited at the Dallas Museum of Art; the Contemporary Arts Museum Houston; the Museum of Contemporary Art, Miami; MASS MoCA; the SFMoMA; The Guggenheim and the MoMA, among others. Ritchie has also been involved in over 100 group exhibitions since 1990 at an international level.

Ritchie’s previous work at MIT includes Games of Chance and Skill (2002), a public art installation in the MIT Zesiger Center; Darkness Visible (2009), a performance with Bryce Dessner at the Broad Institute (which developed into a multi-year collaboration with Dessner and Kenan Sahin Distinguished Professor of Music Evan Ziporyn at MIT, including The Morning Line, ZKM Karlsruhe), and The Long Count / The Long Game (2015), a multimedia performance at the Institute of Contemporary Art, Boston featuring MIT faculty and alumni.

“The portfolio of prototypes, all in various stages of development, offer tantalizing hints as to how AI could transform and shape interactions between viewers and art.”

“Artist Matthew Ritchie…reflect[s] on the ephemeral nature of information through a series of paintings, moving images, sculptures and sounds.”

The Metropolitan Museum of Art: Scenes from a Salon on Artificial Intelligence

As the 2018–20 Dasha Zhukova Distinguished Visiting Artist, Matthew Ritchie creates a new transmedia work in collaboration with a multidisciplinary team of MIT artists, faculty, and students. This new collaborative work takes inspiration from the “invisible college” of MIT: the interactions, discussions, and thought processes that take place outside of the formal classroom and administrative structure of the Institute.

Article: "An Artist Inquires into the Computational Substrate at MIT"