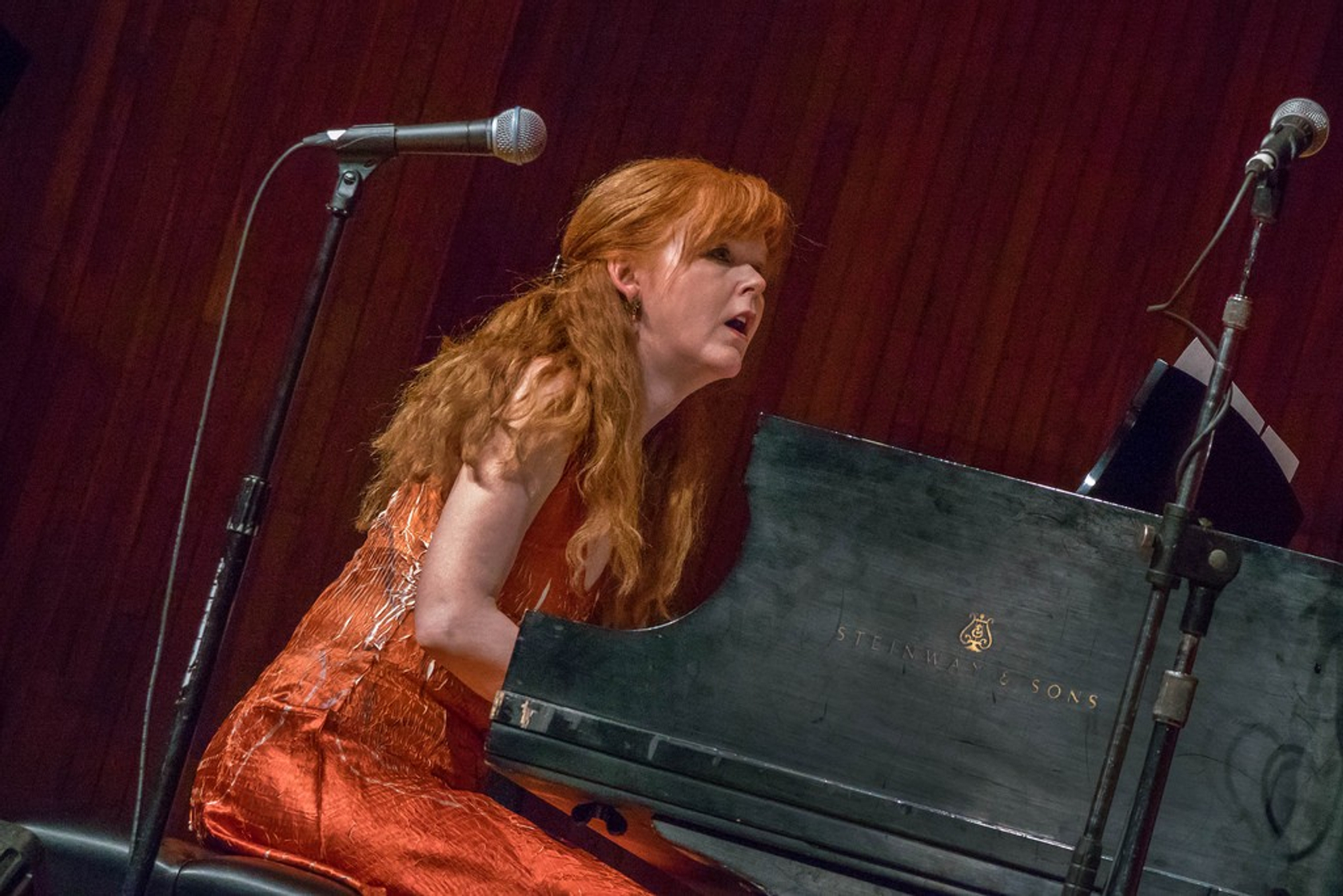 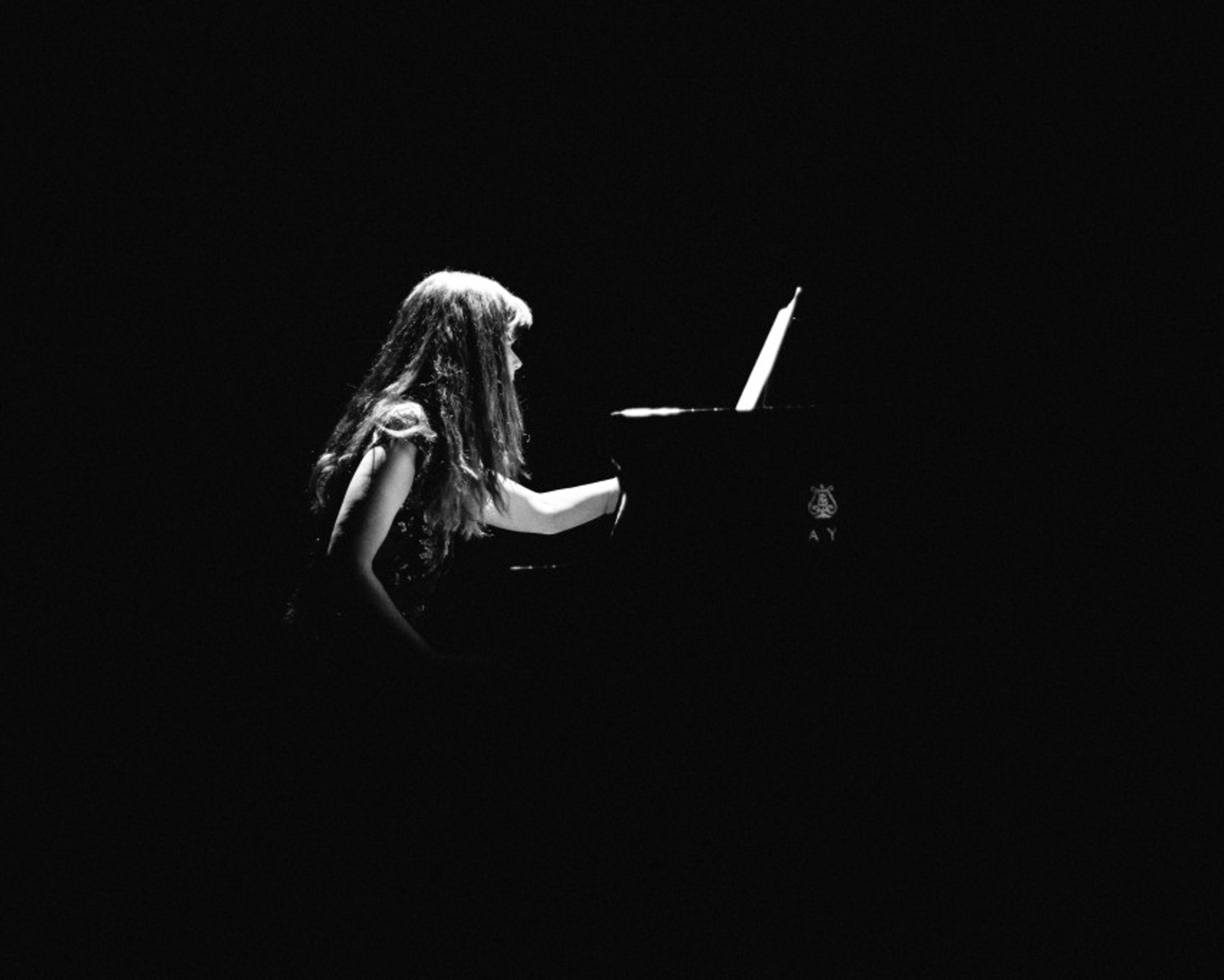 Pianist Sarah Cahill joined forces with MIT’s Gamelan Galak Tika and violinist Johnny Gandelsman to present a program honoring the centennial of composer Lou Harrison. The program included Harrison’s groundbreaking works for gamelan and western instruments, performed on instruments built by the composer himself and curated by Jody Diamond. The concert also featured the world premiere of composer and MIT Professor Evan Ziporyn’s “By the Numbers,” an homage to Harrison for violin and piano.

As part of the 2014–15 season of MIT Sounding, Cahill celebrated the 80th birthday of Terry Riley in 2015 by playing seven compositions by and for Riley, including several world premieres by MIT composers.

Cahill’s visits to the Institute were part of MIT Sounding, an innovative annual performance series that blurs the boundaries between contemporary and world music. Curated by Evan Ziporyn, faculty director of the MIT Center for Art, Science & Technology, the 2014–15 season of MIT Sounding’s diverse offerings ranged from live performances by new music pioneers Alvin Lucier and Terry Riley to early music denizens Boston Camerata and the Grammy Award-winning ensemble Roomful of Teeth. The 2017–18 season of MIT Sounding integrated the avant-garde sounds of ancient instruments and traditional practices with cutting-edge composition and technology to present various visions of a new, evolving music that defies genre.

The ICA and MIT present a centennial celebration of composer Lou Harrison. MIT’s Gamelan Galak Tika joins forces with violinist Johnny Gandelsman and pianist Sarah Cahill to present a program of Harrison’s groundbreaking works for gamelan and western instruments, performed on instruments built by the composer himself and curated by Jody Diamond. The concert also featured the world premiere of composer and MIT Professor Evan Ziporyn’s By the Numbers, an homage to Harrison for violin and piano.

Sarah Cahill, recently called “a sterling pianist and an intrepid illuminator of the classical avant-garde” by the New York Times and “a brilliant and charismatic advocate for modern and contemporary composers” by Time Out New York, has commissioned, premiered and recorded numerous compositions for solo piano. Composers who have dedicated works to her include John Adams, Terry Riley, Frederic Rzewski, Pauline Oliveros, Yoko Ono, Evan Ziporyn, Julia Wolfe and Ingram Marshall.

Cahill has researched and recorded music by the important early 20th-century American modernists Henry Cowell and Ruth Crawford Seeger, and has commissioned a number of new pieces in tribute to their enduring influence. She enjoys working closely with composers, musicologists and scholars to prepare scores for performance.

Recent appearances include a concert at San Quentin of the music Henry Cowell wrote while incarcerated there, four performances at the San Francisco Symphony’s SoundBox, a residency at the Noguchi Museum and concerts at Le Poisson Rouge and the Italian Academy for Advanced Studies at Columbia University in New York. She performs as a duo with violinist Kate Stenberg and has performed chamber music with the Alexander String Quartet, New Century Chamber Orchestra, the Left Coast Chamber Ensemble and many other chamber groups.

Upcoming performances include the Interlochen Arts Festival, Mendocino Music Festival, the Cleveland Museum of Art, concerts in Tokyo and Fukuoka, Terry Riley’s Sri Moonshine Music Series and the New Music Miami ISCM Festival. Most of Cahill’s albums are on the New Albion label. She has also recorded for the CRI, New World, Tzadik, Albany and Cold Blue labels. Her album A Sweeter Music is on the Other Minds label, and Pinna Records recently released her two-CD set of Mamoru Fujieda’s Patterns of Plants.

She has recorded a five-CD set of Terry Riley’s solo and four-hand (with pianist Regina Schaffer) music, along with nine pieces she commissioned in honor of Riley’s 80th birthday, for the Irritable Hedgehog label, scheduled for release later this year. Her radio show, “Revolutions Per Minute,” can be heard every Sunday evening from 8 to 10 pm on KALW, 91.7 FM in San Francisco. She is on the faculty of the San Francisco Conservatory and curates a monthly series of new music concerts at the new Berkeley Art Museum and Pacific Film Archive.

Wall Street Journal: ‘Eighty Trips Around the Sun: Music by and for Terry Riley’ by Sarah Cahill Review

Blog: A Tribute to Lou Harrison Honors His Love Affair with Javanese Music