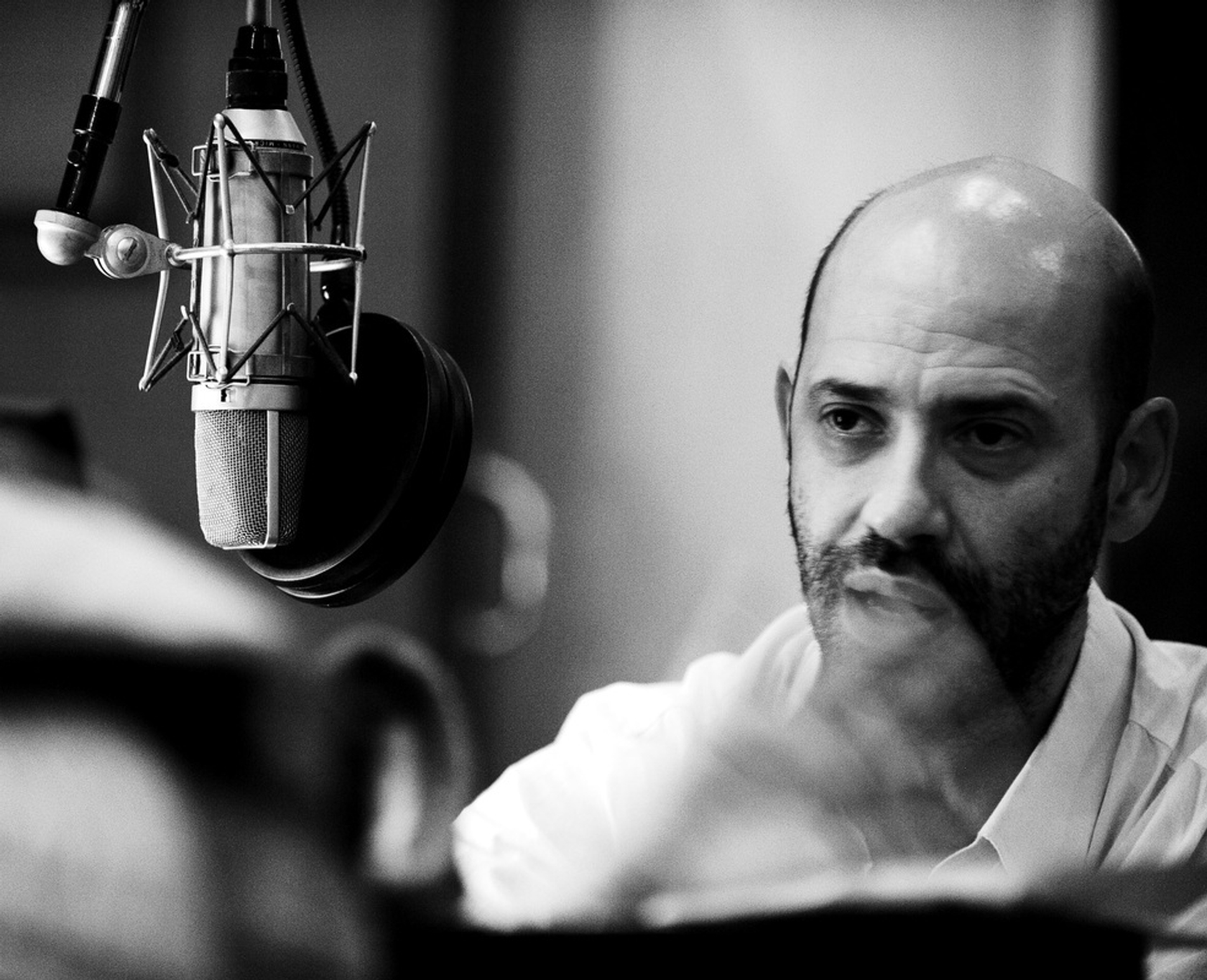 A stellar collision of vocal jazz, Latin music, and poetry

In April 2017, two of South America’s greatest jazz artists, Luciana Souza and Guillermo Klein, joined the MIT Wind Ensemble, MIT Festival Jazz Ensemble, and MIT Vocal Jazz Ensemble to create innovative new compositions and arrangements. The performance represented the culmination of a semester-long collaboration between Souza, Klein, and three MIT student ensembles. The evening’s highlight was the world premiere of Works on Hope, a newly commissioned work by Klein for Souza and the MIT Wind Ensemble under the direction of Fred Harris. Also performing with Souza and Klein was the Festival Jazz Ensemble and the MIT Vocal Jazz Ensemble, which focused their entire spring semester repertoire on music composed or performed by Souza.

Founded by Music Director Dr. Frederick Harris, Jr. in the fall of 1999, the MIT Wind Ensemble (course 21M.426) is comprised of outstanding MIT undergraduate and graduate students studying a wide range of disciplines. MITWE has been featured on NPR and was the subject of an Emmy-winning PBS documentary. Professional recordings by MITWE have been released on Albany Records, Innova Records, and Sunnyside. MITWE’s 2015 Infinite Winds recording received a five-star review from Down Beat and was chosen by the magazine as one of its “Best Albums of 2015 Five-Star Masterpieces”—the first such recognition of its kind for a collegiate ensemble. The Boston Globe called the recording “one of the most compelling of 2015.” Since 2001, MITWE has commissioned 35 original works for wind ensemble by many prominent composers. Gunther Schuller, John Harbison, Michael Colgrass, Evan Ziporyn, Peter Child, Jamshied Sharifi, Guillermo Klein, Don Byron, and others have worked with or composed for MITWE. It has collaborated extensively with many of MIT’s ensembles, faculty members, and outside guest artists. MIT Affiliated Artist, composer, and tuba player of the Empire Brass, Kenneth Amis, is the Assistant Conductor of MITWE.

Founded in 1963 by Boston jazz icon Herb Pomeroy and led since 1999 by Dr. Frederick Harris, Jr, the MIT Festival Jazz Ensemble (course 21M.442), is comprised of outstanding MIT undergraduate and graduate students studying a wide range of disciplines. The FJE is a 2013 recipient of MIT’s Laya and Jermone B. Wiesner Award in the Arts. It is the only MIT entity that has earned this recognition three times (previous awards in 1991 and 1982), a testament to its consistent high quality over many decades. FJE has released five professional recordings including its major jazz label debut release on Sunnyside in 2015, Infinite Winds (a joint CD with MITWE). The CD which features FJE performing the world premiere recording of Chick Corea’s From Forever (composed for FJE), received a five-star review from Down Beat and was chosen by the magazine as one of its “Best Albums of 2015 Five-Star Masterpieces”—the first such recognition of its kind for a collegiate ensemble. The Boston Globe called the recording “one of the most compelling of 2015.” The FJE has a long history of performing original music by MIT students and composers from around the world. Since 2001, it has presented over 40 world premieres. Mark Harvey, Herb Pomeroy, Jamshied Sharifi, Ran Blake, John Harbison, Chick Corea, Joe Lovano, Kenny Werner, Don Byron, Steve Turre, Magali Souriau, Guillermo Klein, Bill McHenry, Chris Cheek, Miguel Zenón, Dominique Eade, Eviyan, and George Schuller, among others, have worked with the MIT Festival Jazz Ensemble.

The MIT Vocal Jazz Ensemble was formed in the spring of 2011, the first and only vocal jazz performance group at the Institute. Founded and coached by Institute Professor John Harbison until the fall of 2015, Boston-based vocalist Liz Tobias is the current director of VJE. The ensemble focuses each semester on one or two composers, exploring both well-known songs and “hidden gems.” In the mix each semester are also a few modern compositions and arrangements, by Harbison and others, and by student members of the ensemble. The nine singers have quickly risen to high recognition not only on campus but throughout Boston. Recent performance opportunities include a professional recording with the MIT Festival Jazz Ensemble of the MIT school song and “A Rhumba for Rafael Reif,” as well as an appearance with the Boston Pops at Boston’s Symphony Hall. VJE’s debut recording Vocal Jazz at MIT: Store-Bought Hair, was released in 2015.

Liz Tobias is a seasoned vocalist and pianist who has been recognized as a “breath of fresh air on the world jazz stage.” A unique mix of soul and sharp technique, Liz draws audiences in with her Australian charm and creative interpretations of works old and new. Residing in Boston, Tobias travels regularly around the northeast corner of the U.S., performing in New York, New Hampshire, Maine, and Massachusetts.

Tobias was recently appointed to the faculty of the University of New Hampshire as their Jazz Choir Director and Jazz voice specialist. She also teaches on faculty at the Boston Arts Academy and MIT, coaching voice lessons and teaching jazz choirs. She is currently pursuing a Doctorate in Musical Arts in Jazz Voice at the New England Conservatory under the guidance of leading jazz performers and educators such as Dominique Eade, Ken Schaphorst, Ralph Alessi, Jason Moran, Fran Carlberg, Cecil McBee, John McNeil, Miguel Zenon, Kate Mcgarry, Jerry Bergonzi, and voice-technician Jeannette LoVetri. Tobias also holds a master’s degree from New England Conservatory, where she was chosen to work with Grammy award-winning singer Luciana Souza in a special concert featuring Souza’s music. Liz Tobias hails from Adelaide, Australia and holds a Bachelor of Music with Honors in Jazz Performance from the Elder Conservatorium of Music.

Luciana Souza and Guillermo Klein’s visit to the Institute was part of MIT Sounding, an innovative annual performance series that blurs the boundaries between contemporary and world music. Curated by Evan Ziporyn, Faculty Director of the MIT Center for Art, Science & Technology, the 2016-17 season of MIT Sounding integrated the avant-garde sounds of ancient instruments and traditional practices with cutting-edge composition and technology to present various visions of a new, evolving music that defies genre.

The concert included a new work for Luciana Souza and the MIT Wind Ensemble, composed by Guillermo Klein based on poetry chosen by Klein.

Two of South America’s greatest jazz artists, Luciana Souza and Guillermo Klein, joined the MIT Wind Ensemble, MIT Festival Jazz Ensemble, and MIT Vocal Jazz Ensemble in creating innovative new compositions and arrangements. The performance represented the culmination of Klein’s and Souza’s MIT residency and a semester-long exploration of their music by the three MIT student ensembles. The evening’s highlight was the world premiere of Works on Hope by Klein for Souza and the MIT Wind Ensemble under the direction of Fred Harris.

During the 7:30pm pre-concert ArtWeek talk, VJE director Liz Tobias and select MIT students discussed collaborating with Souza and Klein, the rationale behind the project, and the challenges and rewards of developing new works remotely and onsite with guest artists.

Rehearsals and masterclasses with Luciana Souza and Guillermo Klein
April 2017

A composer, arranger, pianist, and occasional singer, Guillermo Klein began his craft in childhood in Argentina. When his father gave him a piano at age 11, he promptly began writing songs, inspired by the legendary Argentinean composer Astor Piazzolla. Klein attended Berklee College of Music, where his intention to study classical music gave way to his passion for jazz. His colleagues at Berklee—many of whom came from South America—provided the framework for what would eventually become Klein’s main musical voice, the Big Van large ensemble (later called Los Guachos). After graduating from Berklee, Klein moved to New York City and quickly became associated with Smalls, a jazz club where he established a weekly engagement with his 17-piece Big Van band. Smalls was critical in fostering young artists that would ultimately be some of the most influential voices of modern jazz.

Klein scaled the band down to a more streamlined 11-piece unit, known as Los Guachos (roughly translated, the bastards). The band developed in residencies at Smalls and, later, the Jazz Standard. Sunnyside Records soon released two CDs by Los Guachos: Los Guachos II (1999) and Los Guachos III (2002), and Klein is still with this label. Since moving back to Argentina in 2000 with his wife, Klein has recorded with local musicians and has released a series of critically-acclaimed CDs with Los Guachos including: Live in Barcelona (Sunnyside, 2005), Filtros (Sunnyside, 2008) and his latest, Carrera (Sunnyside, 2012). Other important recordings include his work as a composer and/or arranger on Solar Return Suite (with the MIT Wind Ensemble), Domador de Huellas (Sunnyside, 2010), Bienestan (Sunnyside 2011) with Aaron Goldberg and Miguel Zenon’s Grammy-nominated, Alma Aldentro.

Klein plays regularly with some of the most outstanding musicians in the jazz community, including Chris Cheek, Miguel Zenón, Bill McHenry, Jeff Ballard, Ben Monder, Aaron Goldberg, Carmen Canela, and Jorge Rossy. In addition to teaching composition in Buenos Aires, Klein has given master classes and seminars throughout Europe, including the Jazz Institut Berlin, Sibelius Academy in Helsinki, Jazz Schule Basel, and Le Mirail in Toulouse.

The 2016-17 MIT Sounding Series is presented by the MIT Center for Art, Science & Technology (CAST) and MIT Music and Theater Arts.

NPR: Guillermo Klein And His Band Of Devotees

Article: A fresh sound made for all people

The Luciana Souza Trio creates a fresh and universal sound.