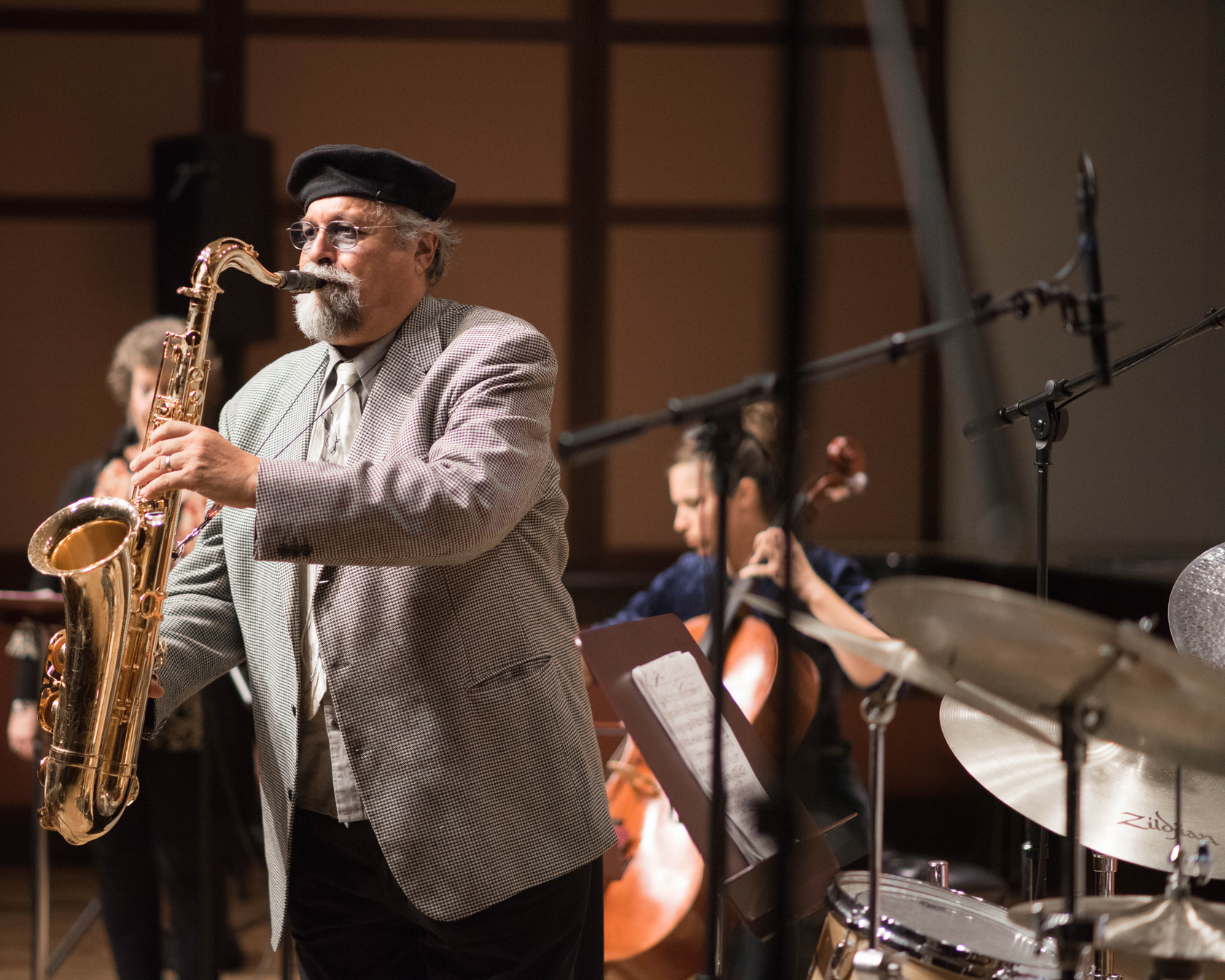 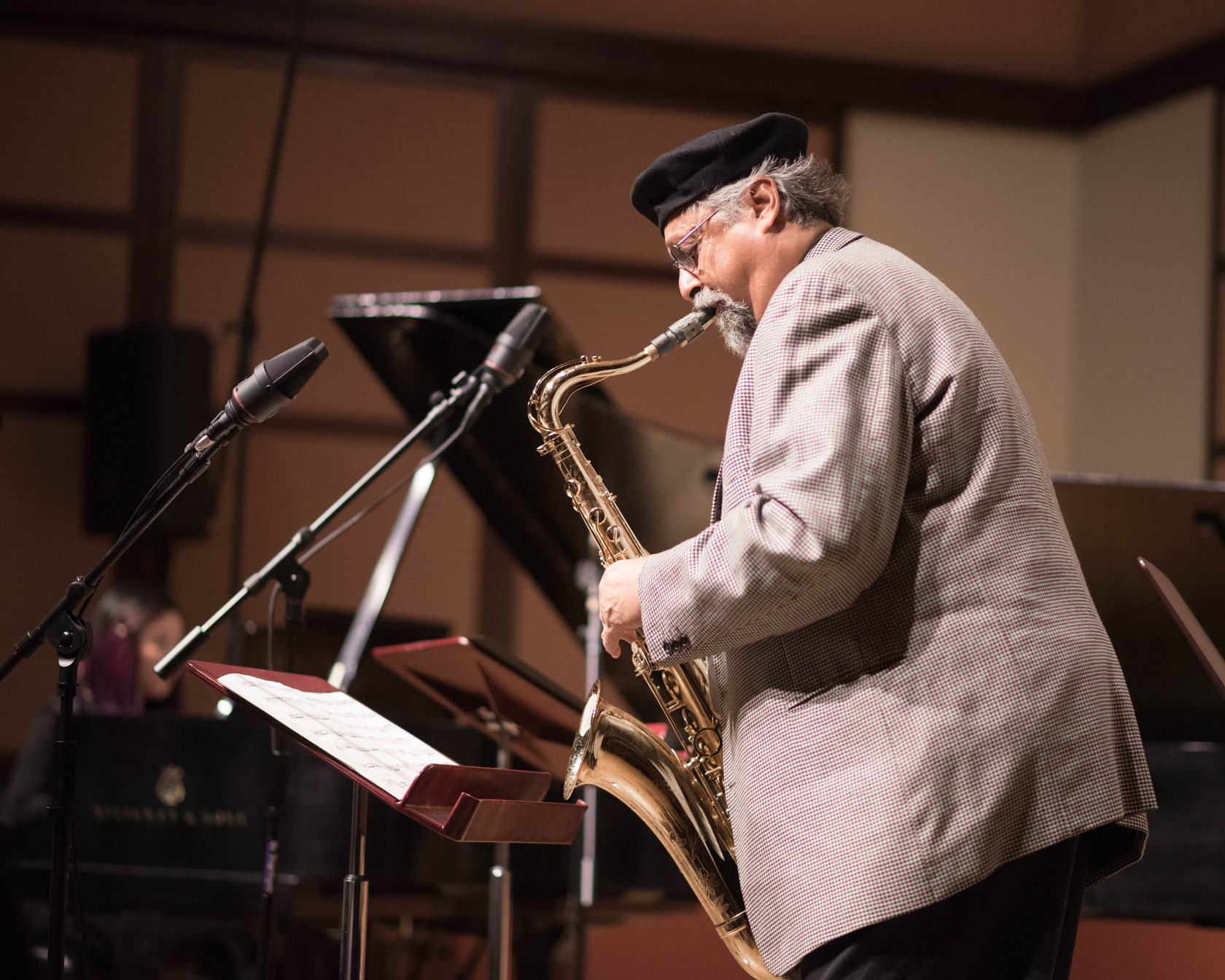 “One of the greatest musicians in jazz history”—New York Times

Joe Lovano’s longstanding collaboration with MIT faculty and students dates back to a 2002 performance of works by Senior Lecturer Mark Harvey with the MIT Festival Jazz Ensemble under the direction of Fred Harris.

Joe Lovano’s visit to the Institute is part of MIT Sounding, an innovative annual performance series that blurs the boundaries between contemporary and world music. Curated by Evan Ziporyn, Faculty Director of the MIT Center for Art, Science & Technology, the 2016-17 season of MIT Sounding integrates the avant-garde sounds of ancient instruments and traditional practices with cutting-edge composition and technology to present various visions of a new, evolving music that defies genre.

Hailed by The New York Times as “one of the greatest musicians in jazz history,” Grammy Award-winning saxophone giant Joe Lovano has distinguished himself for some three decades as a prescient and path finding force in the arena of creative music. Since 2009, Lovano’s main vehicle for his exploration has been Us Five, a dynamic young band which features drummers Otis Brown III and Francisco Mela, bassist Esperanza Spalding and pianist James Weidman. Us Five’s most recent release, Bird Songs, Lovano’s 22nd album for Blue Note Records, is an exploration of the Charlie Parker songbook that breaks the mold of Bird tribute records. “I didn’t approach this as a tribute record,” states Lovano, dispelling any preconception that his latest album is a mere retread. In 2011, the Jazz Journalist’s Association (JJA) named Bird Songs, Recording of the the Year, and named Us Five, Small Ensemble of the Year. It was also the Downbeat Editor’s Pick for Album of the Year. Us Five’s debut recording—Folk Art (2009)—was a wide-ranging set of Lovano’s original compositions that garnered them the award for Best Small Ensemble of the Year at the 2010 JJA Jazz Awards and Best Jazz Group of the Year in the 2010 DownBeat Critics Poll. Lovano also won the JJA’s Musician and Tenor Saxophonist of the Year and DownBeat’s Jazz Artist and Tenor Saxophonist of the Year.

Lovano was born in Cleveland, Ohio in 1952, and began playing alto saxophone as a child. His father, tenor saxophonist Tony “Big T” Lovano, schooled Lovano not only in the basics, but in dynamics and interpretation, and regularly exposed him to live performances of international jazz artists, such as Sonny Stitt, James Moody, Dizzy Gillespie, Gene Ammons and Rahsaan Roland Kirk. Upon graduation from high school he attended Berklee College of Music. Lovano’s early professional gigs were as a sideman with organists Lonnie Smith, Brother Jack McDuff and a three-year tour with the Woody Herman Thundering Herd from 1976 to 1979.

After leaving Herman’s band, Lovano settled in New York City where he joined the Mel Lewis Orchestra for its regular Monday night concert at the Village Vanguard; playing from 1980 to 1992, he recorded six albums with the Orchestra. Lovano still finds time for very special performances with the Vanguard band and recently paid tribute to Thad Jones with Thad’s brother, Hank Jones, on the Grammy nominated, 2007 release, Kids: Live at Dizzy’s Club Coca-Cola.

Lovano has also collaborated, both in the studio and the concert hall, with two other premier tenor saxophonists of his generation, Dave Liebman and the late Michael Brecker, in the collective, Saxophone Summit. Their first release was Gathering of the Spirits (Telarc, 2004). After the untimely passing of Michael Brecker, Lovano and Liebman were joined by Ravi Coltrane on their acclaimed sophomore release, Seraphic Light.

In early 2008, Lovano replaced Joshua Redman in the tenor saxophone chair of the touring and studio ensemble, the SFJazz Collective. The Collective also included trumpeter Dave Douglas, trombonist Robin Eubanks, and fellow Blue Note Recording Artist, vibraphonist Stefon Harris. They joined Miguel Zenon, Renee Rosnes, Matt Penman and Eric Harland in this popular ensemble of some of today’s most exciting jazz players. Lovano’s Grammy-nominated Symphonica (2008) placed him in front of the world-renowned WDR Big Band and WDR Rundfunke Orchestra performing some of the saxophonist’s most acclaimed and cherished compositions, as arranged and conducted by Michael Abene.