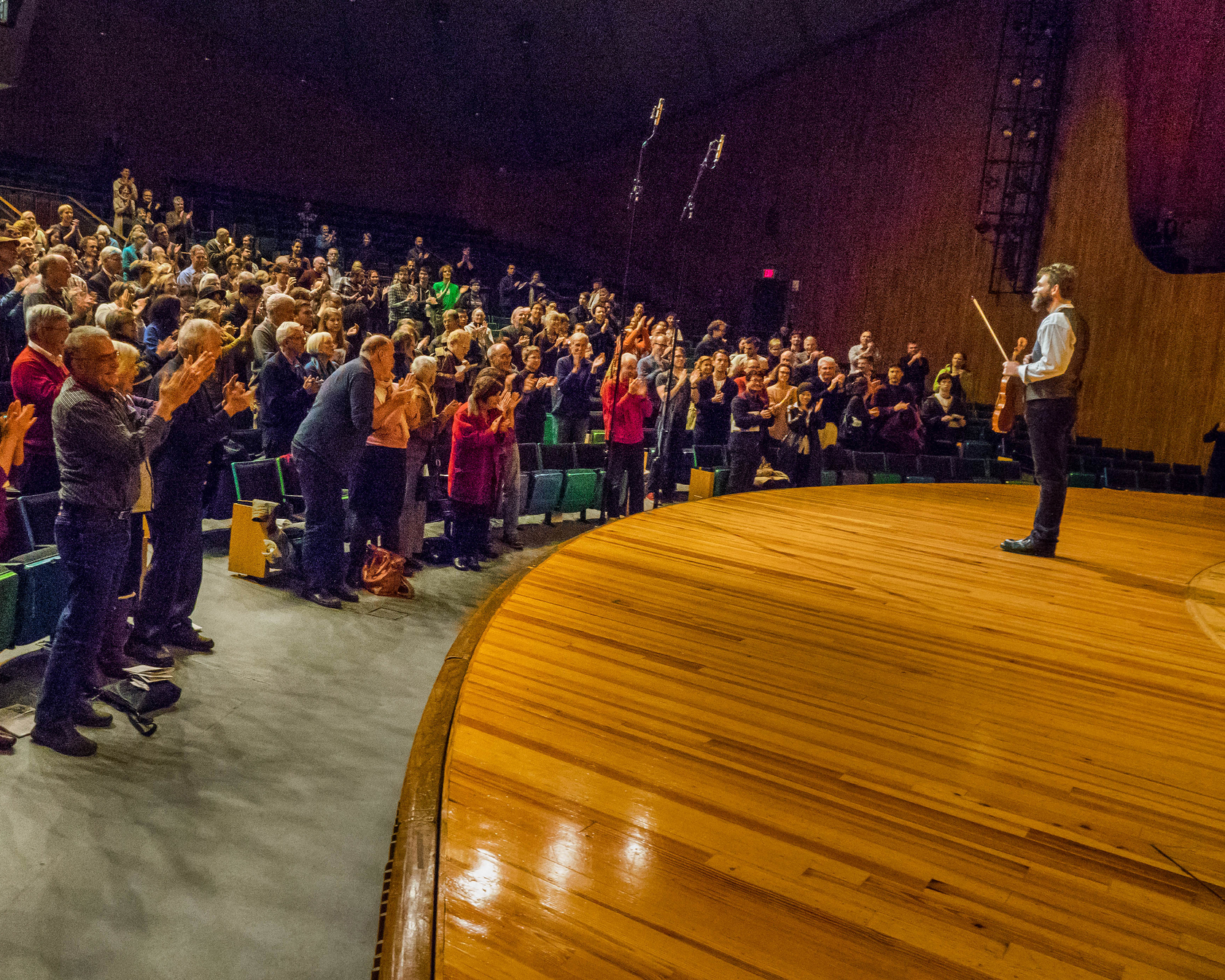 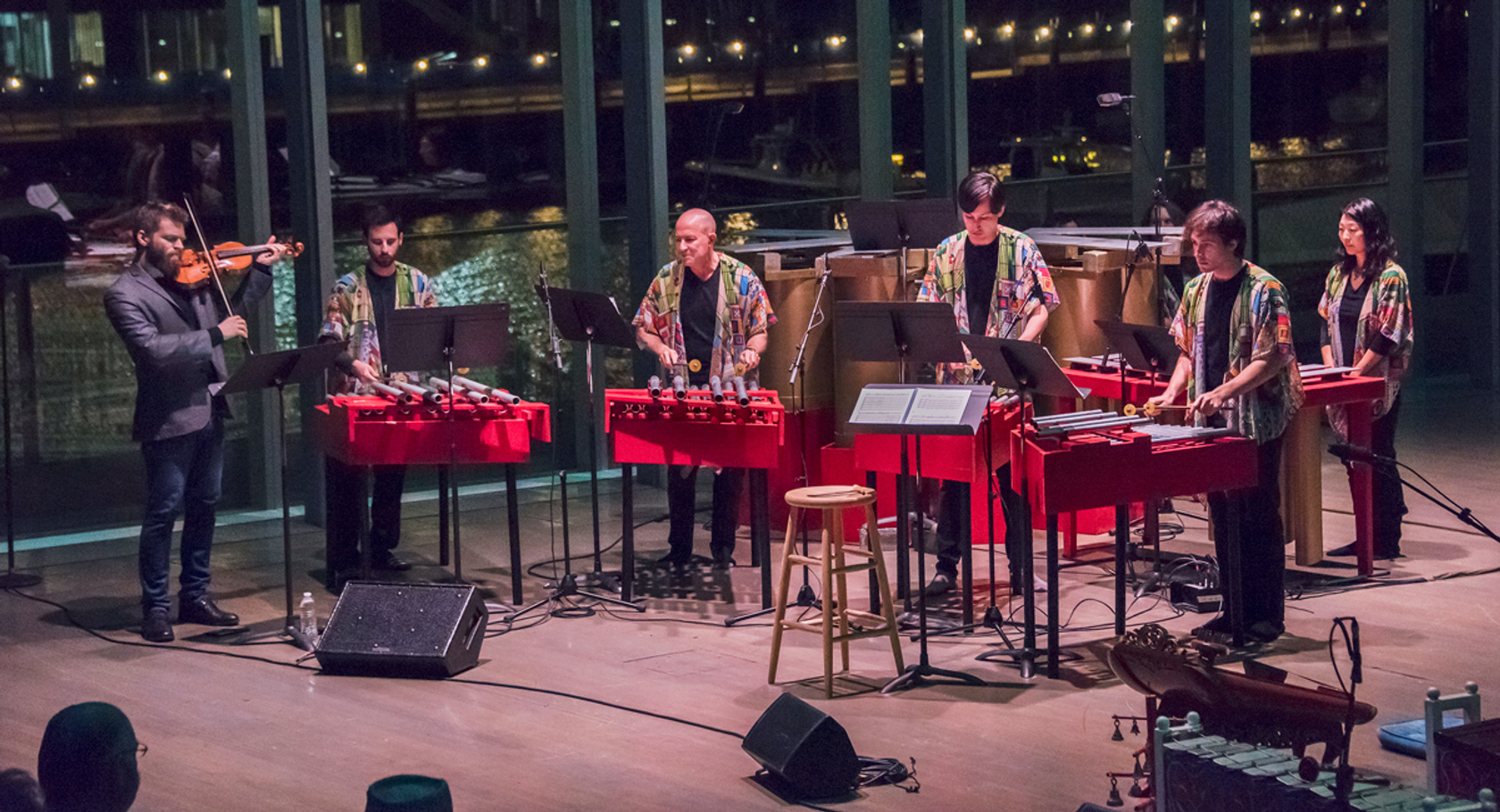 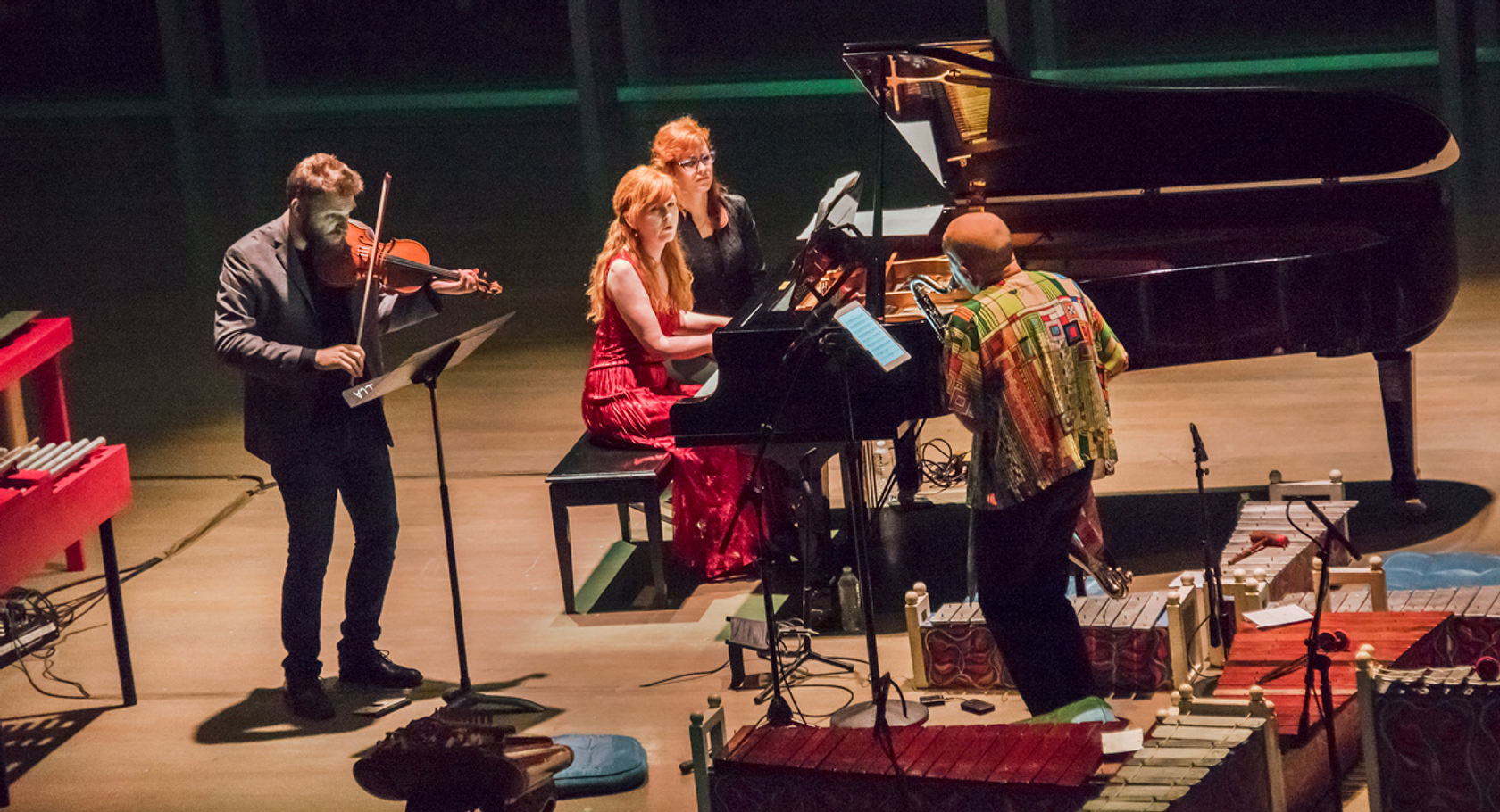 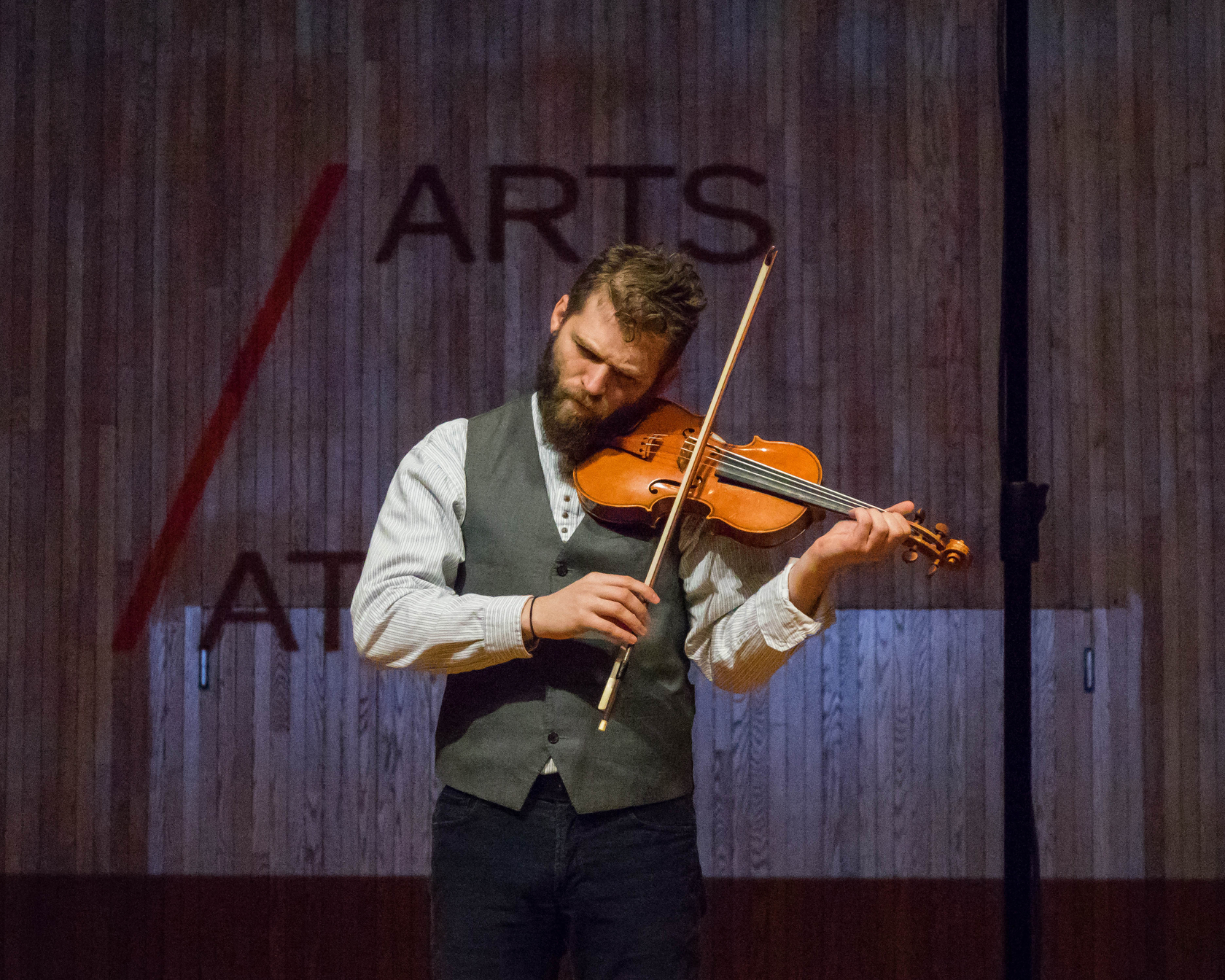 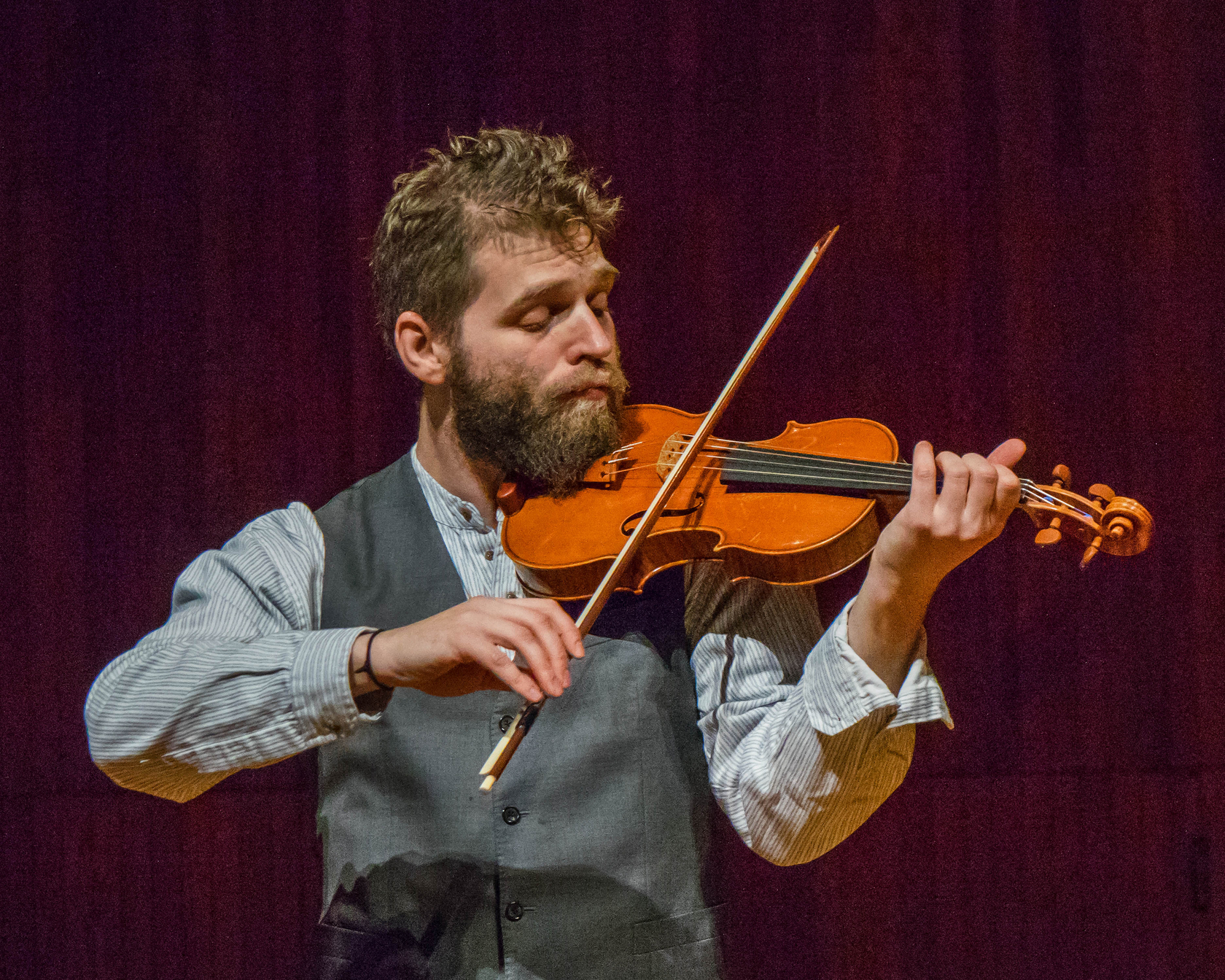 In January 2015, Gandelsman gave an unadvertised pop-up recital at MIT, performing Bach’s Complete Sonatas and Partitas for Solo Violin to a small but packed house. Lloyd Schwartz, describing the event on NPR’s Fresh Air, said, “I’ve heard some famous violinists attempt this epic feat, but none of them gripped me and delighted me as thoroughly as Gandelsman.”

In October 2015, Gandelsman brought his powerful interpretation of these landmark works to a much larger concert hall, reprising his riveting performance for the first annual Terry and Rick Stone Concert in MIT’s Kresge Auditorium.

Johnny Gandelsman’s visits to MIT, and in 2017 to the ICA Boston, are part of MIT Sounding, an innovative annual performance series that blurs the boundaries between contemporary and world music. Curated by Evan Ziporyn, faculty director of the MIT Center for Art, Science & Technology (CAST), the 2015–16 season of MIT Sounding’s diverse offerings ran the gamut, from Bach to Led Zeppelin and Morton Feldman, and from acoustic recitals to electronic manipulations of the human voice. “We sought out artists who are reinventing performance and presentation,” Ziporyn said. “We selected people who are innovating not just through new works and technologies, but by reexamining—and reframing—our notions of genre and repertoire, translating between mediums or radicalizing the performance experience itself.” The 2019-2020 season of MIT Sounding continues to expand boundaries, presenting unique artists who push the envelope of their respective genres, creating new evolving music for the 21st century.

The ICA and MIT present a centennial celebration of composer Lou Harrison. MIT’s Gamelan Galak Tika joins forces with violinist Johnny Gandelsman and pianist Sarah Cahill to present a program of Harrison’s groundbreaking works for gamelan and western instruments, performed on instruments built by the composer himself and curated by Jody Diamond. The concert will also feature the world premiere of composer and MIT Professor Evan Ziporyn’s By the Numbers, an homage to Harrison for violin and piano.

Grammy award-winning violinist and producer Johnny Gandelsman’s musical voice reflects the artistic collaborations he has been a part of since moving to the United States in 1995. Richard Brody of The New Yorker has called Johnny Gandelsman “revelatory” in concert, placing him in the company of “radically transformative” performers like Maurizio Pollini, Peter Serkin, and Christian Zacharias.

Gandelsman integrates a wide range of creative sensibilities into a unique style amongst today’s violinists, one that, according to the Boston Globe, possesses “a balletic lightness of touch and a sense of whimsy and imagination.” Gandelsman’s recording of the complete Bach Sonatas and Partitas for Solo Violin, which reached #1 on the Billboard Classical Chart, and made it onto NY Magazine and NY Times Best of the Year lists, was described by the Globe as “…sparklingly personal Bach, shorn of grandeur, lofted by a spirit of dance, and as predictable as the flight of a swallow.”

Gandelsman has been producing records since starting his label, In a Circle Records, in 2008. Recent credits include three Brooklyn Rider albums: “Philip Glass – Annunciation” (OMM, 2019); “Dreamers”, a collaborative album with vocalist Magos Herrera (Sony, 2018); and “Spontaneous Symbols” (In a Circle, 2017). Additional producing credits include his own recording of the complete Sonatas and Partitas for violin by JS Bach (In a Circle, 2018) and two albums with Silkroad Ensemble and Yo-Yo Ma: Music for “The Vietnam War”, a film by Ken Burns and Lynn Novick (In a Circle, 2017); and “Sing Me Home,” a Grammy-award winner for Best World Music album (Sony, 2016).

Johnny Gandelsman was born in Moscow into a family of musicians. His father Yuri is a professor of Viola at Michigan State University, his mother Janna is a pianist, and his sister Natasha is a violinist as well. He lives in Brooklyn with his partner, Amber Star Merkens, and their two kids, Julius Ivry and Raiya Leone.

“Crisp, buoyant and with a sweet clarity of tone, it’s one of the most dance-like takes on this daunting set of masterpieces.”

“…There are many fine recordings and several great ones of these sonatas and partitas, and now a new one by Johnny Gandelsman takes its place among the very best.”

The Boston Musical Intelligencer: A Fiddling Twist to the Bach Cello Suites

Boston Globe: A Violinist’s Bach, Shorn of the Monumental

New York Times: Ideas From Near and Far Meet In Intimate Scale

Bach: The Six Suites for Solo Cello (for solo violin)

Russian-born violinist Johnny Gandelsman’s singular musical voice comes from the spirit of collaboration. As a member of Yo-Yo Ma’s Silk Road Ensemble and the string quartet Brooklyn Rider, he has distilled the creative sensibilities of a wide range of master musicians from around the world. At MIT last January, Gandelsman returned to the classical repertoire with a pop-up, unadvertised recital, performing Bach’s Complete Sonatas and Partitas for Solo Violin to a small but packed house. Lloyd Schwartz, describing the event on NPR’s Fresh Air, said, “I’ve heard some famous violinists attempt this epic feat, but none of them gripped me and delighted me as thoroughly as Gandelsman.” Gandelsman took his powerful interpretation of these landmark works to the concert hall, reprising his riveting performance for the first annual Terry and Rick Stone Concert in MIT’s Kresge Auditorium on October 30, 2015 Credit: L. Barry