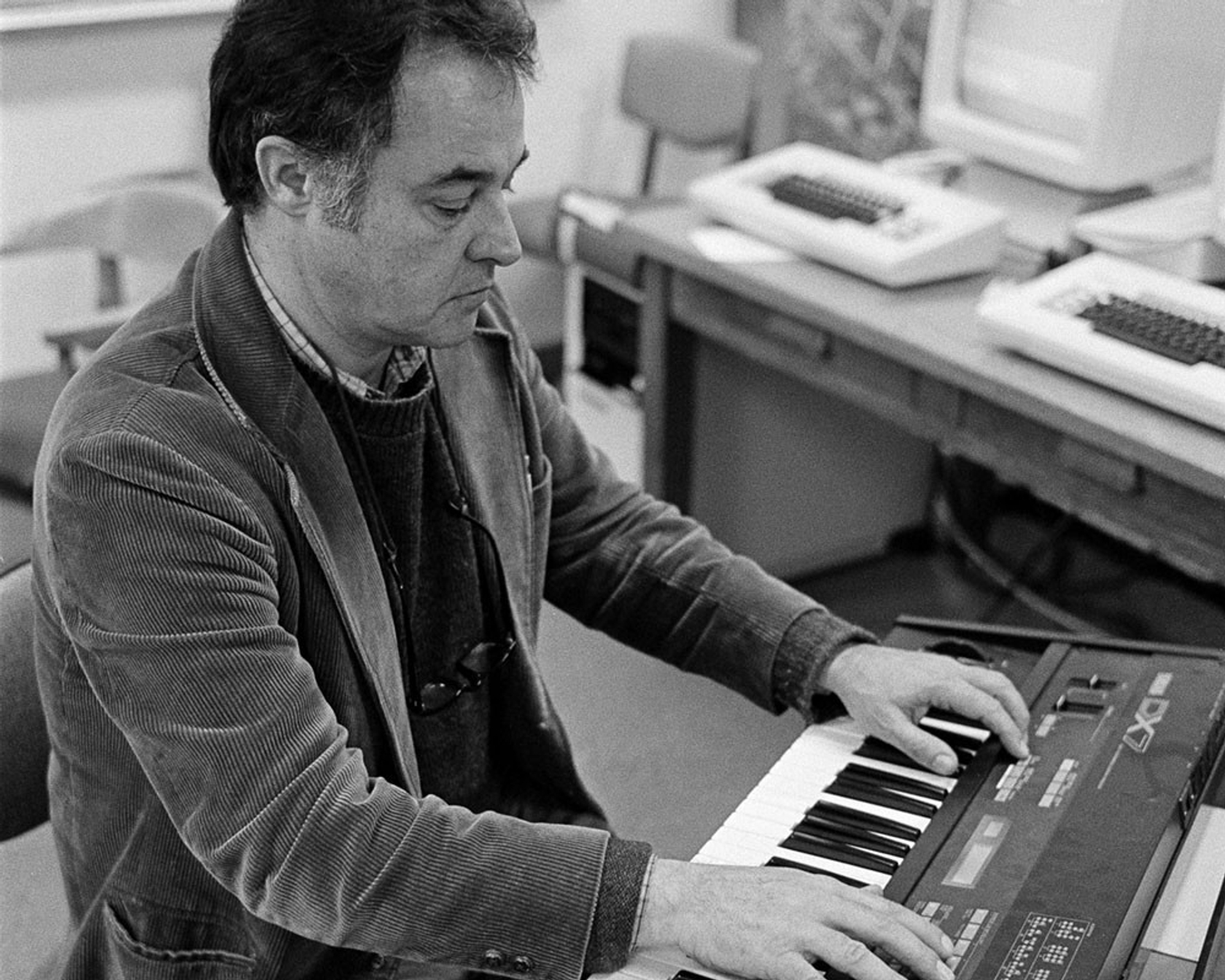 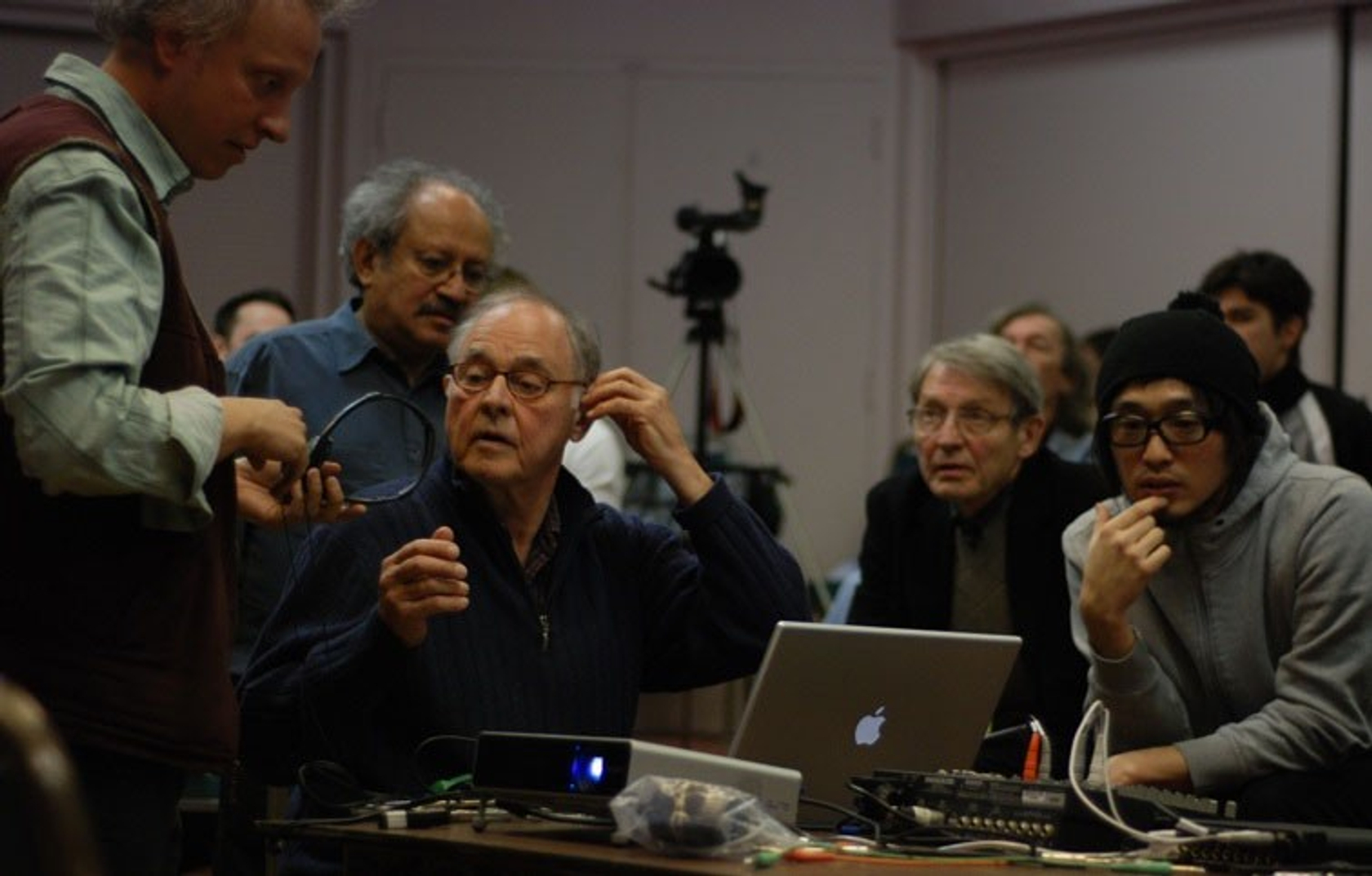 John Chowning gave a lecture and concert at MIT in October 2012 titled “Sound Synthesis and Perception: Composing from the Inside Out.” The performance was the East Coast premiere of his piece Voices featuring his wife, the soprano Maureen Chowning, and an interactive computer using the programming language MaxMSP.

Chowning sees the piece as a kind of rebuttal to those who once doubted the “anachronistic humanists” who feared the numbing encroachments of the computer. In Voices, he says, the “seemingly inhuman machine is being used to accompany the most human of all instruments, the singing voice.” The piece also sums up a lifetime of Chowning’s musical preoccupations, his innovations in our understanding of sound and its perception, and the far-reaching aesthetic possibilities in the dialogues between man and machine.

At MIT, Chowning enjoyed meeting the next generation of scientists, programmers and composers, glimpsing into the future of music. “The machinery is no longer the limit,” he announced to the crowd. Indeed, MIT has its own rich history of innovation in the field, as embodied by figures such as Professor Emeritus Barry Vercoe, who pioneered the creation of synthetic music at the Experimental Music Studio in the 1970s before going on to head the Media Lab’s Music, Mind, and Machine group. “MIT is in many ways a unique institution,” Chowning says, where, “cutting edge technology interacts with highly developed artistic sensibilities.” In the Media Lab, Chowning saw the dreams of his generation pushed forward. One thing, in his mind, is clear: “music has humanized the computer.”

Presented by the MIT Center for Art, Science & Technology and the MIT Media Lab.

Performance
Sound Synthesis and Perception: Composing from the Inside Out
October 11, 2012

With soprano Maureen Chowning, John Chowning performs the new work Voices (2011) for solo soprano and interactive computer using MaxMSP. Chowning also presents three iconic early pieces, Turenas (1972), Stria (1977) and Phoné (1981), that each make use of sound spatialization, algorithmic composition, and FM synthesis algorithms in unique ways. Chowning shows how the development of 4-channel spatial illusions—spatialization—launched the discovery of FM synthesis. Its development gave rise to both the perceptual insights leading to the composition of Turenas and the synthesis of the singing voice found in Voices and Phoné. In Stria and Voices, both the scale (pitch space) and the inharmonic timbres (spectral space) are rooted in the Golden Ratio.

The simplicity of FM synthesis allowed composers to appropriate a new technology that would soon change the world: the computer. The global sonic landscape was transformed, often in unexpected ways, as computer music moved from the lab to studios, recordings, concerts and homes. Today, the applications of FM synthesis are omnipresent—in everything from contemporary electronic music to cell phone ringtones.

John Chowning is Professor Emeritus at Stanford and founding director of the university’s Center for Computer Research in Music and Acoustics (CCRMA). As a composer, Chowning has worked toward turning his discovery of frequency modulation synthesis (FM) into a system of musical importance, using it extensively in his works.

More at the Center for Computer Research in Music and Acoustics: John Chowning

More at All Music: John Chowning