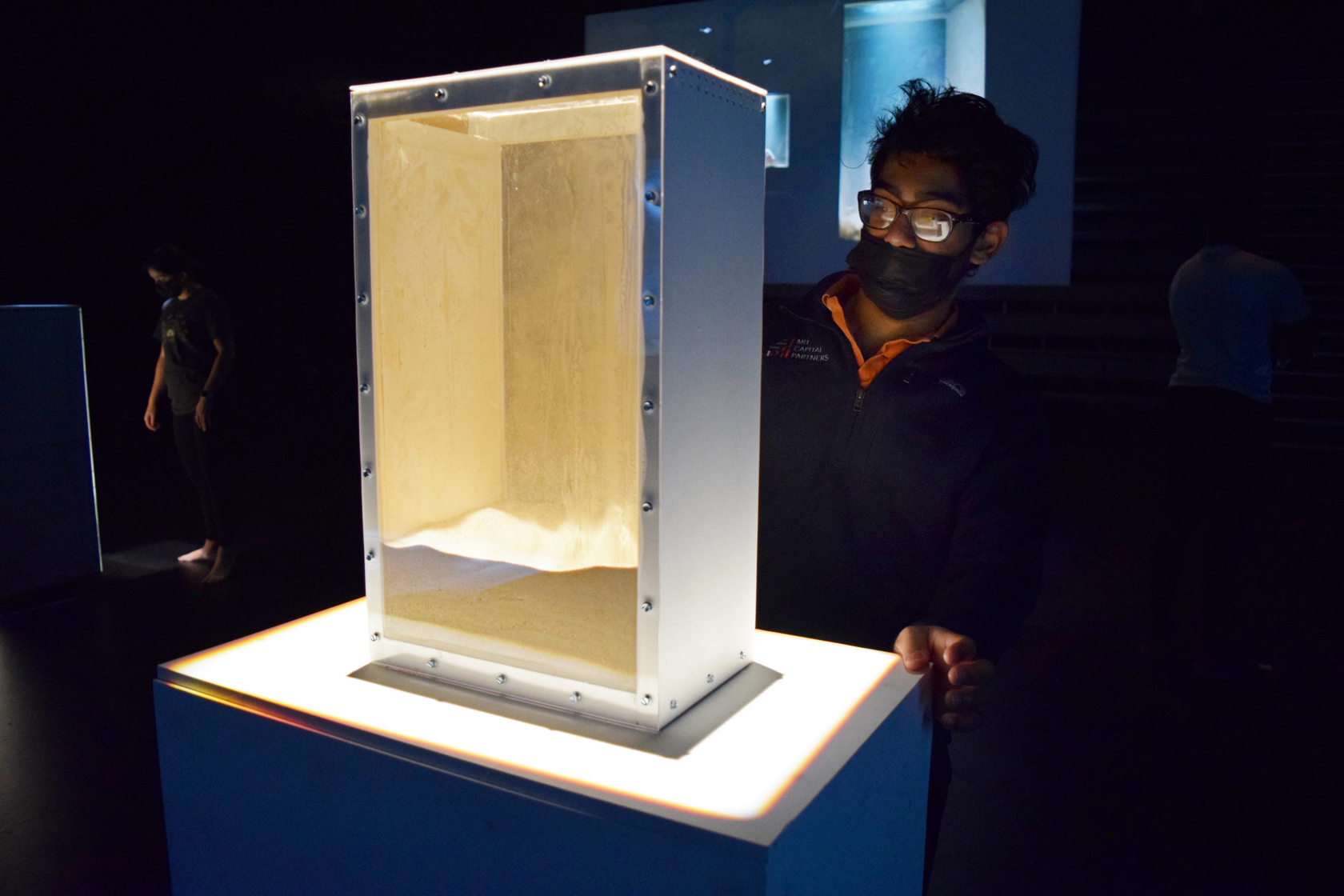 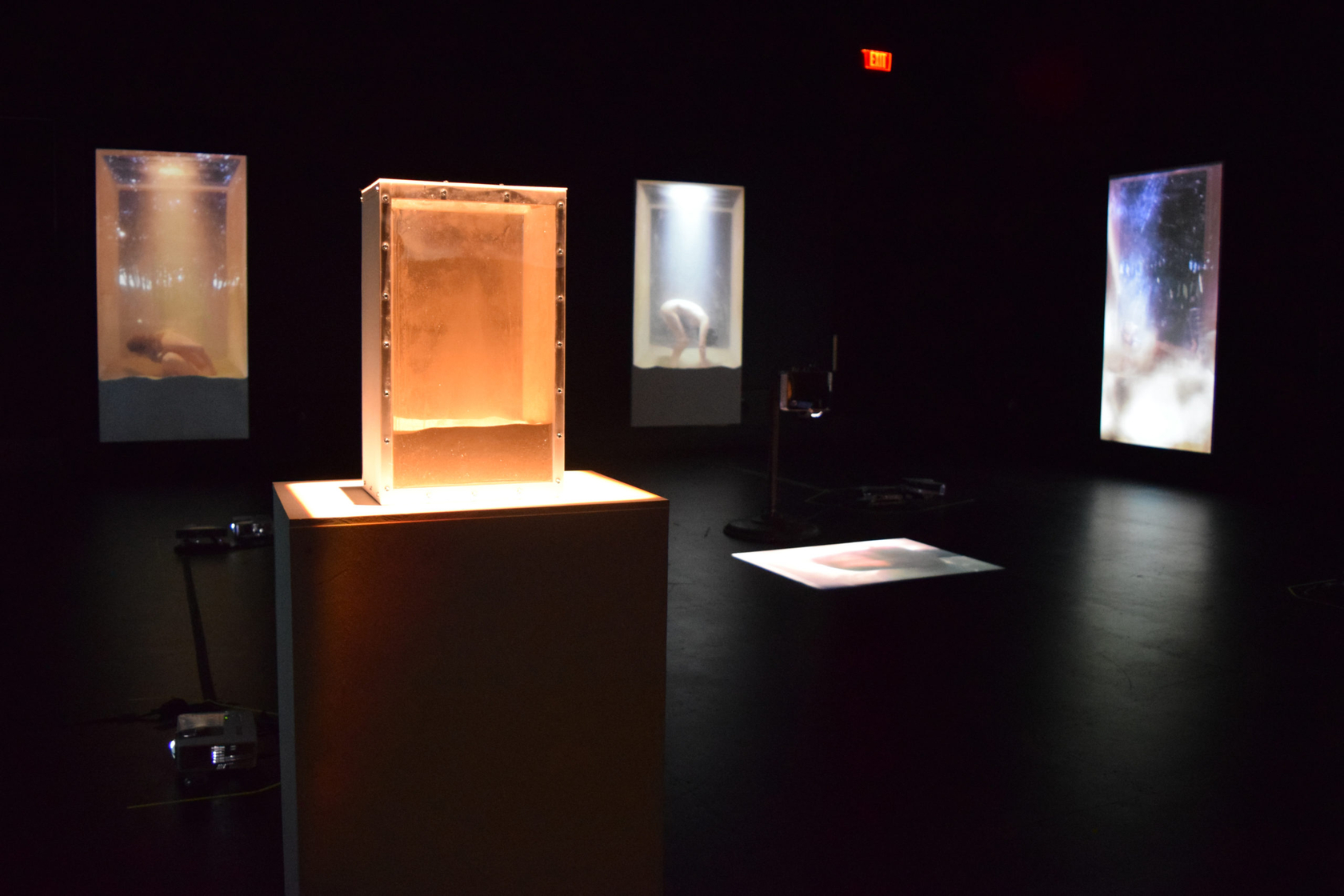 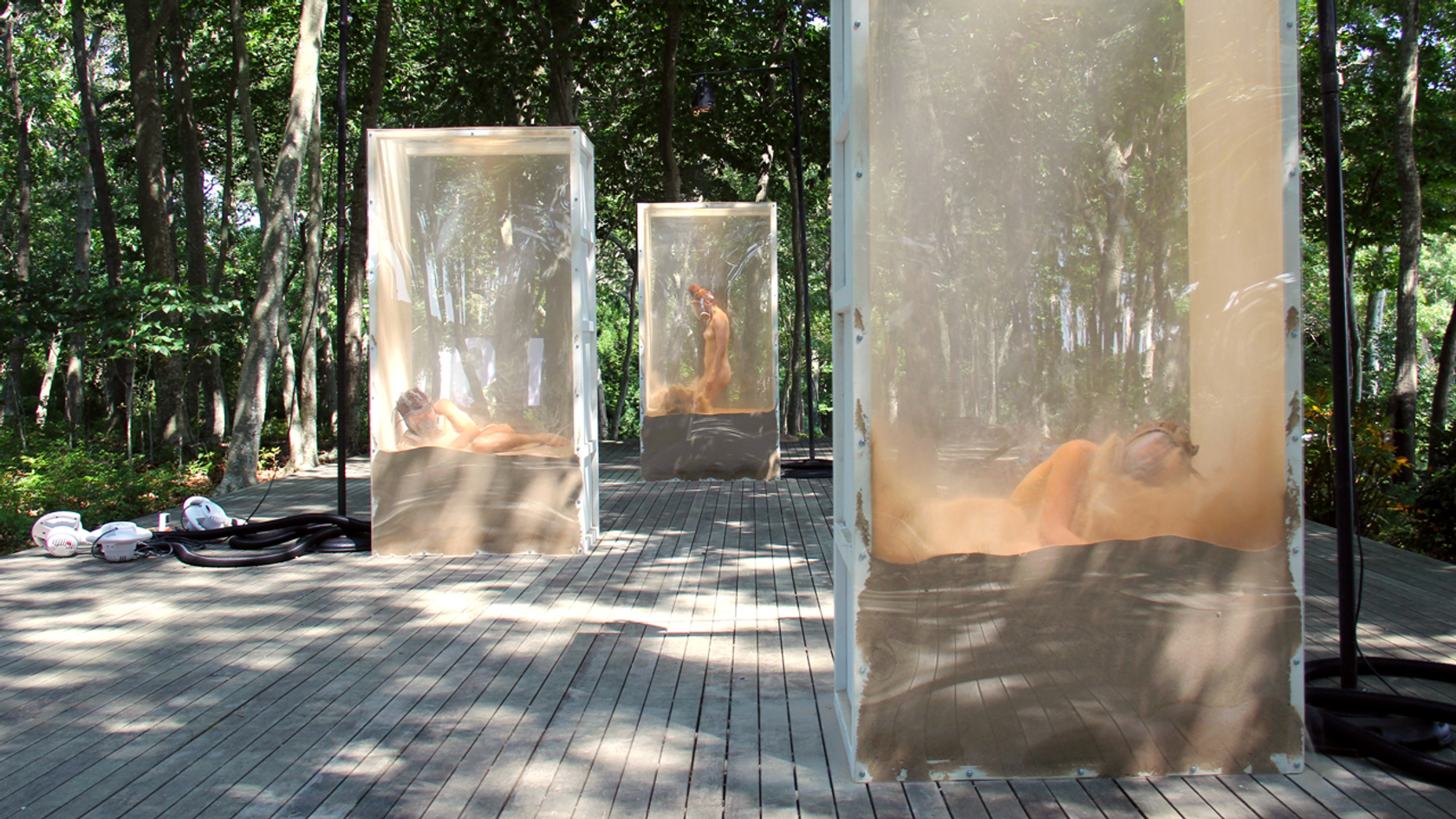 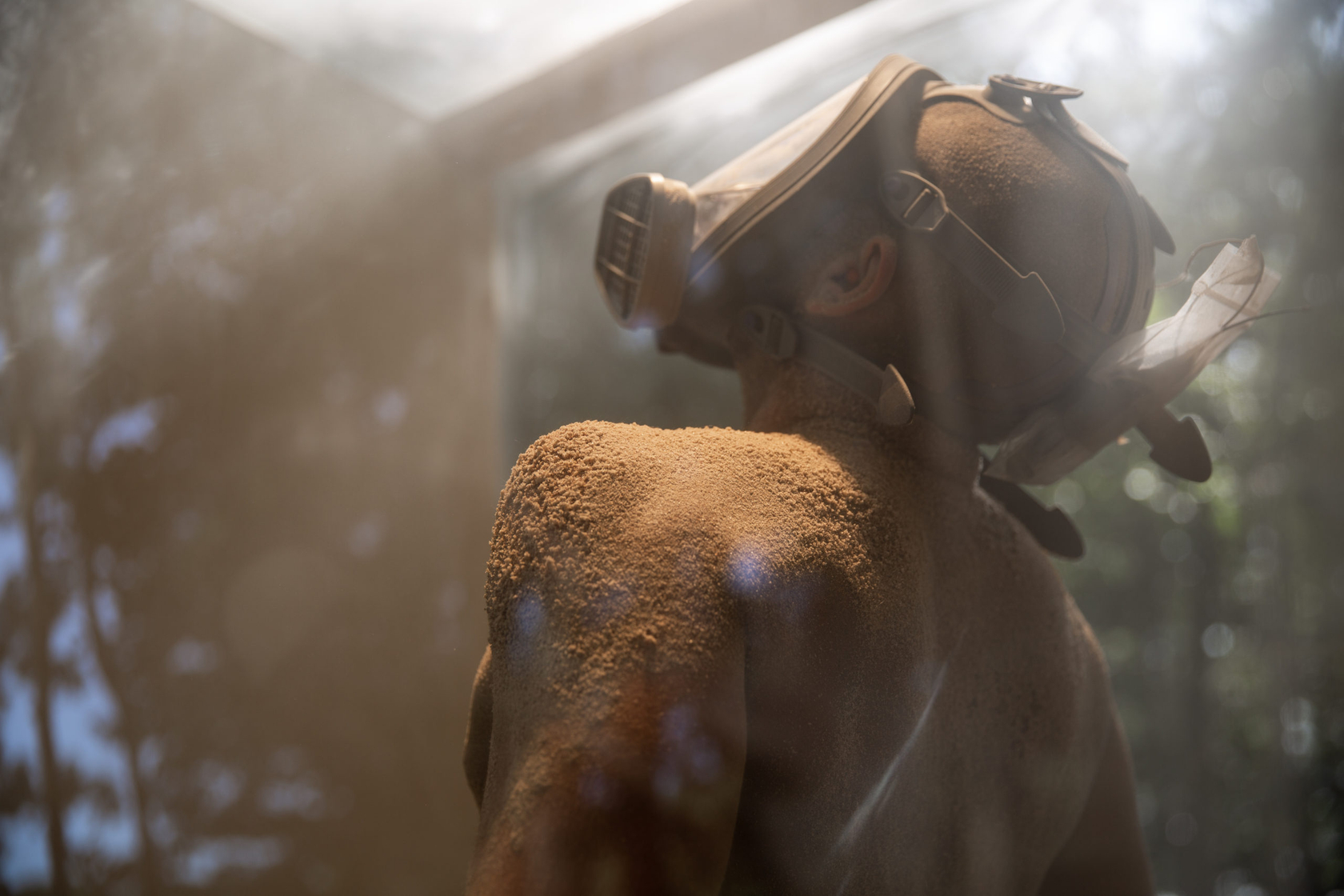 Conceived by multidisciplinary artist duo Ximena Garnica & Shige Moriya and performed by the LEIMAY Ensemble, this expansive project offers spectators multiple entry points to engage with questions of being, interdependence, and coexistence.

In Correspondences, individual performers wearing gas masks are enclosed inside transparent chambers partially filled with sand. As the performers repeatedly try to stand atop the sand, machines attached to the chambers intermittently trigger a blast of sand causing the performers to sink back down to the ground, only to begin to rise again. The sand blasts continuously occur in the chambers, even in the absence of a performer. This work reflects on “the power of rising” during these times in which many people are experiencing heightened uncertainty and political and economic turmoil. The aim is not to pin a singular meaning to this work; instead, let its power rest in the juxtapositions of multiplicities and, as the title implies, in its correspondences.

This project was initiated at Robert Wilson’s The Watermill Center, and the first phase of the installation performance was shown in Manhattan at Astor Place (in partnership with HERE Arts Center), in Queens at Socrates Sculpture Park, and in upstate New York at Hurleyville Art Center.

During the fall 2021 semester, MIT Lecturer Daniel Safer collaborates with LEIMAY to develop a new layer of the work via a constellation of lectures and performances by MIT faculty, students, and groups, culminating in a future large-scale presentation.

There are multiple opportunities to engage with LEIMAY while they are in residency: first, a durational multi-channel video installation and models of kinetic sculptures of the project in development at MIT Theater Building W97 which is accessible to MIT COVID Pass holders from December 2 through December 11, 2021, and to the general public on selected days. Second, the general public and MIT COVID Pass holders are invited to an evening of screenings of short films from Correspondence’s first phase and a live performance of in-progress choreographic materials related to the company’s LUDUS practice, followed by a conversation with the artists. Third, the public can contribute to Correspondence’s interactive archive by using this online form to submit responses to any or all of the artists’ questions relating to the work as well as to share their own photos and videos of the project.

A live presentation of choreographic materials followed by a post-event conversation with the artists moderated by MIT Theater Arts lecturer Daniel Safer.

Shige Moriya, Masanori Asahara, and Krystel Copper offer a demonstration incorporating elements from the course related to notions of space, body, and time.

Ximena Garnica and Shige Moriya are a Colombian and Japanese artist duo working in the visual and performing arts fields as multidisciplinary and interdisciplinary artists, directors, choreographers, curators, and teachers. Their collaborative works include performances, sculptural, video, mixed-media, and light installations as well as photography and film projects. Garnica and Moriya also invest their energy in critical research, printed and digital publications, educational activities, and community projects based on resource sharing and collaboration.

Their work is rooted in questions of being, perception, interdependency, and coexistence. Moriya is good with machines and Garnica is good with bodies. They are often lost in translation, and almost daily engage in what they call “generative confrontation”. They look to expose the multiplicity of spatial and temporal intervals that exist within the body, between materials and environments. They are curious about what emerges when the stability of habits, affirmation of binaries, social norm expectations, and the crystallization of identity dissolve and expose the potentialities of being.

LEIMAY is a grassroots, POC immigrant artist-run presenting organization and performing arts ensemble that exists out of a live/workspace called CAVE in Williamsburg Brooklyn. The word “leimay” is a Japanese term symbolizing the moment of change as in the moment between darkness and the light of dawn, or the transition from one era to the other. Initiated by Shige Moriya of Japan in 1996 and joined by Ximena Garnica of Colombia in 2001, LEIMAY holds a regular NYC home season, offers classes to the public, brings in guest artists for workshops, and collaborates with presenting/educational partners across NYC and beyond. LEIMAY curates and presents various events and performance seasons throughout the years, including CAVE Gallery from 1996-2006, the NY Butoh Festival from 2003-2009, and SOAK from 2008-2018. LEIMAY’s studio CAVE, as cited in the book Alternative Histories: New York Art Spaces from 1960-2010 (published in 2012), is embedded in the aesthetic and social fabric of NYC as a site for experimentation for artists to innovate, perform, and exhibit.

The LEIMAY Ensemble is a group of national and international dancers and performers who create body-centered works around the principle of LUDUS, a practice that explores methods to physically condition the body of the performers and develop a sensitivity to the “in-between space.” The group holds a regular practice at the CAVE studio in Brooklyn where they engage in the creation of new work as well as on teaching, training, research, and distillation of years of direct transmission of embodied knowledge by Japanese Butoh pioneers, Noguchi Taiso practitioners, and Experimental Theater innovators.

Masanori Asahara  is a Japanese born dancer, choreographer, and improvisation artist based in Brooklyn, New York. Masanori has been a core member of the LEIMAY Ensemble since 2010. He has toured, taught, and performed with the ensemble for over a decade.

Krystel Copper is second-generation immigrant dance artist born to parents from Argentina and Portugal. She joined LEIMAY as a member of the performance and research ensemble in 2016 for the premiere of Frantic Beauty at BAM. Copper holds a B.A. in Dance from the University of Maryland.

Dan Safer is a lecturer in dance in MIT Theater Arts and is the Artistic Director of dance/theater company Witness Relocation. Safer has directed/ choreographed all of their shows, ranging from fully scripted plays (including world premieres by Chuck Mee, and an English language premiere by Toshiki Okada) to original dance/theater pieces, to many things in between, all over the place, from the back rooms of bars in NYC to Théâtre National de Chaillot in Paris to a giant leaky warehouse at a dance festival in Poland where a light fell off the grid halfway thru a show and almost killed him.

This residency is presented by the Center for Art, Science & Technology, MIT Music and Theater Arts, the Lukitsh Fund, and LEIMAY.