The Thrilling Adventures of Lovelace and Babbage. Credit Sydney Padua. 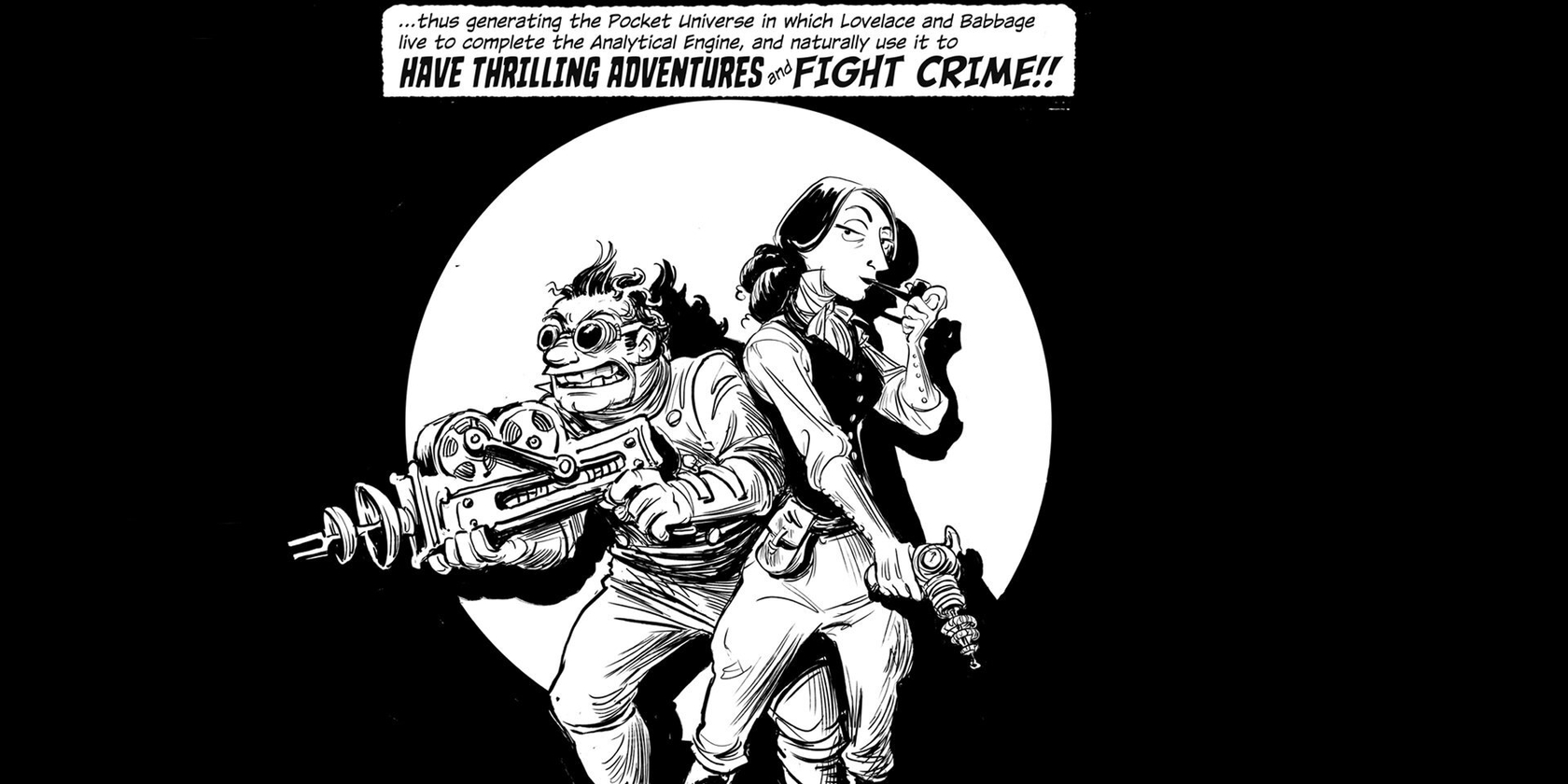 The Thrilling Adventures of Lovelace and Babbage. Credit Sydney Padua.

The Thrilling Adventures of Lovelace and Babbage, presented by MIT CAST and Guerilla Opera, is a new opera by composer Elena Ruehr and Pulitzer-prize winning librettist Royce Vavrek with stage direction by Giselle Ty.

Based on the New York Times best-selling graphic novel by Sydney Padua, this is the first staging of the comedic new work. It centers on scientists Ada Lovelace and Charles Babbage, the real-life unsung inventors of the first computer, fighting crime in alternate universes with their new invention.

Ada Lovelace was a mathematician, gambler, and proto-programmer, whose writings contained the first-ever appearance of general computing theory. Lovelace was the first great genius to develop a programming language, and she is still not generally known. Charles Babbage was the eccentric inventor of the Difference Engine, an enormous clockwork calculating machine that would have been the first computer if he had ever finished it.

Ruehr’s composition includes sounds from a real Difference Engine, which she recorded in Seattle. From the machine’s clicks, clacks, and thunks Ruehr created a digital percussion section, which she programmed into an electronic marimba—a synthesizer played with mallets by a percussionist—to incorporate the actual sounds as part of the opera.

Join graphic novelist Sydney Padua as she talks about her work, followed by MIT composer Elena Ruehr and Pulitzer-prize winning librettist Royce Vavrek discussing the process of adapting The Thrilling Adventures of Lovelace and Babbage into an opera. The event will be livestreamed for those unable to attend in person.

In addition to the scheduled performance, CAST and Guerilla Opera welcome members of the blind and visually impaired community to experience a tactile tour of The Thrilling Adventures of Lovelace and Babbage production at 2:00pm directly preceding the 3:00pm matinee performance on Saturday, February 4.

We also welcome audiences to stay for a post-show discussion directly following the 3:00pm matinee performance on Saturday, February 4.

Guerilla Opera is a Boston-based chamber opera company and 501(c)3 non-profit organization whose mission is to foster a new canon of chamber opera for the 21st century through commissioning and performance, and to engage new audiences by making opera more accessible, creative, and experiential. In daring performances that often do not use a conductor, Guerilla Opera has garnered a national reputation for “deliciously inventive” (WBUR) contemporary opera with The Boston Globe raving that “radical exploration remains the cornerstone of everything it does.”

Composer Elena Ruehr, an award-winning member of the MIT Music and Theater Arts faculty since 1992, is known for her vocal music and collaboration with poets. She has written extensively for chamber ensemble, orchestra, chorus, wind ensemble, instrumental solo, opera, dance, and silent film. Ruehr’s works have been commissioned and performed by numerous string quartets, and she has been a Guggenheim Fellow, a fellow at Harvard’s Radcliffe Institute and composer-in-residence with the Boston Modern Orchestra Project.

Royce Vavrek is a Canadian-born, Brooklyn-based opera librettist, playwright, dance scenarist, musical theater writer, and filmmaker. He is the co-artistic director of The Coterie, an opera-theater company founded with Tony-nominee Lauren Worsham, and his work has been commissioned by the Metropolitan Opera, Brooklyn Philharmonic, The Kitchen, and American Lyric Theater, among others. Vavrek’s opera “Angel’s Bone” with composer Du Yun was awarded the 2017 Pulitzer Prize for Music.

Sydney Padua is a graphic novelist, animator, and filmmaker. She grew up partly in Mexico City, partly on the Canadian prairie, and partly in Narnia. She studied theater at the University of Alberta and animation at Sheridan College in Toronto. Her visual effects work includes both hand-drawn and computer-generated animation and appears in such films as The Iron Giant, The Jungle Book, and The Lion King; she is currently a lead animator on Mufasa: The Lion King. She started drawing her cult webcomic The Thrilling Adventures of Lovelace and Babbage by accident in 2009 when a joke blog post took on a life of its own. It eventually became a best-selling graphic novel, winner of the British Society for the History of Mathematics Neumann Prize and nominated for two Eisner Awards. Padua lives in Edinburgh, Scotland, with her husband. She is beside herself with joy that The Thrilling Adventures of Lovelace and Babbage is now an opera, and considers this the greatest thing that could possibly happen to anybody.

Giselle Ty is a London-based stage director who specializes in experimental, interdisciplinary, and site-specific work. She has directed productions for Boston Lyric Opera, Center for Contemporary Opera at National Sawdust, New York University Tisch School of Drama, Harvard University Early Music Society, Simpson College, and Houston Grand Opera (HGOco). Engagements as an associate and assistant director include collaborations with the American Repertory Theatre, Boston Symphony Orchestra, Tanglewood Music Festival, Opera Boston, Gotham Chamber Opera, Icelandic Opera, L’Opéra de Bordeaux, and the Royal Opera House, Covent Garden. Ty also creates original work that sits at the intersection of live performance and installation. In 2015, she conceived and directed All at Once Upon A Time (Or Variations on a Theme of Disappearing) for the Peabody Essex Museum’s Gardner-Pingree House. She was also granted a residency with New Georges’ Theatre to develop Invitation to an Empty Room, an unplugged happening for total strangers.

Presented by the MIT Center for Art, Science & Technology (CAST), MIT Music and Theater Arts, and Guerilla Opera. Additional project development support from a grant from the Council for the Arts at MIT (CAMIT).