Jenna Sutela, Neither a Thing, Nor an Organism, 2018. Photo: Damian Griffiths / Bold Tendencies. 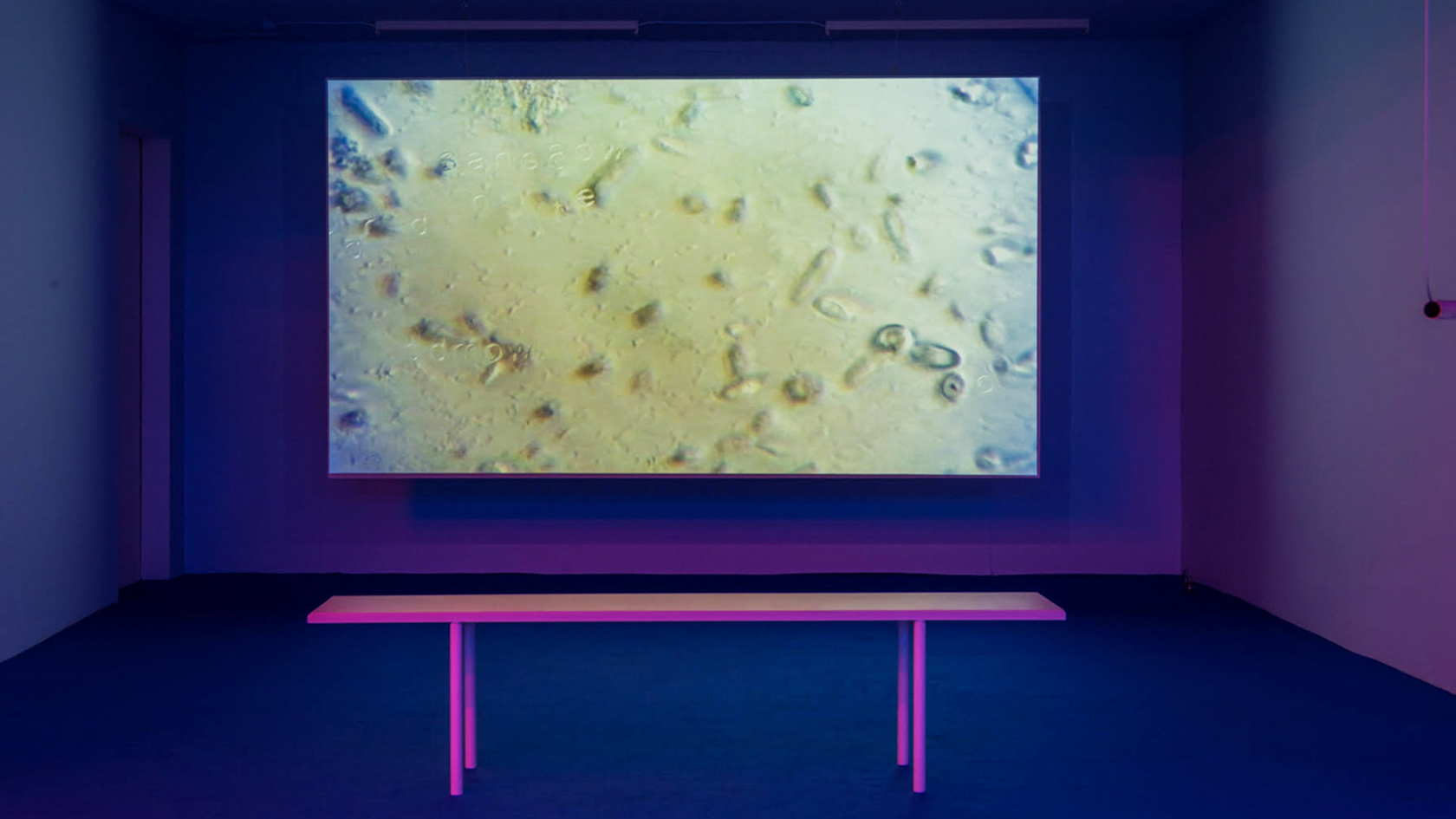 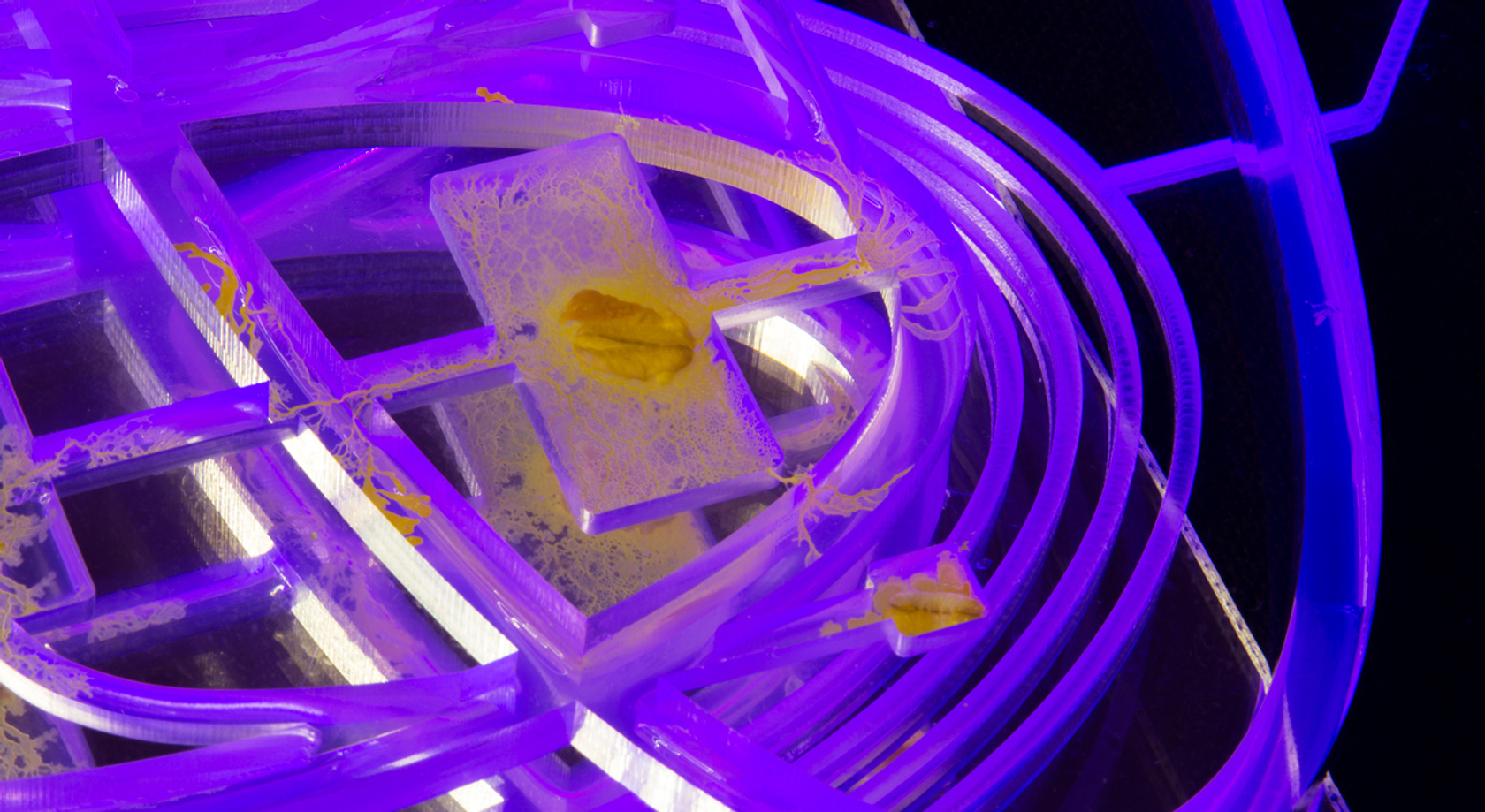 During her residency at MIT sponsored by Professor Caroline A. Jones of the History, Theory and Criticism section of the Department of Architecture at the MIT School of Architecture and Planning, Jenna Sutela is pursuing her interest in biological and computational art, making use of organisms such as the Bacillus subtilis nattō bacterium and the “many-headed” slime mold Physarum polycephalum. Through her work with living materials, Sutela questions how humans and microbes relate to each other, exploring possibilities for interspecies communication.

Together with Markus J. Buehler, McAfee Professor of Engineering, MIT Civil and Environmental Engineering, Sutela explored the sonification and visualization of emotional molecules such as oxytocin and neurotransmitters. Buehler and his team specialize in turning molecular structures and vibrations into sound while using neural networks to detect them in images. Buehler and postdoc Kai Guo conducted molecular dynamics modeling of the chemical structure of oxytocin; Buehler then translated this structure into vibrations, teaching a computer how to recognize them in watercolor paintings that Sutela created as a meditative practice around domestic rituals during the pandemic lockdown. Their resulting artwork, Wet-on-Wet, is a sonic toolkit for amplifying the waves of emotive molecules presented in an online exhibition, Survivance, organized by the Guggenheim Museum and the publishing platform e-flux.

With a practice in sculpture, installation, sound art, and video, Sutela’s residency impacts several areas of MIT, stimulating curiosity-driven research in labs as well as providing new perspectives on organic and synthetic life for students and other community members who experience her class visits and performance.

Caroline A. Jones, Professor of Art History in the History, Theory, and Criticism section, Department of Architecture, MIT

Jenna Sutela is a Finnish artist based in Berlin who works with words, sounds, and other living media. She engages with both futuristic and ancient materials in audiovisual pieces, sculptures, and performances. Sutela’s work seeks to override aspects of culture based on a survival-of-the-fittest narrative in favor of symbiotic relationships between all life forms, both organic and synthetic.

As a bio-artist, Sutela’s microbial collaborators include Physarum polycephalum, the “many-headed” slime mold with a decentralized nervous system, and the extremophilic Bacillus subtilis nattō bacterium. Recently, she has also collaborated with artificial neural networks.

Sutela’s work has been presented internationally at Guggenheim Museum Bilbao; Museum of Contemporary Art, Tokyo; the Serpentine Galleries in London; and other locations.

Past projects include nimiia vibié, sounds of machine learning and interspecies communication, released in summer 2019 on the record label PAN; and the audio-visual work nimiia cétiï, completed in early 2018. nimiia cétiï was produced in collaboration with Memo Akten as part of n-Dimensions, Google Arts & Culture’s artist-in-residence program at Somerset House Studios in London. Using machine learning, audio recordings of an invented Martian language, and the movements of the nattō bacteria, nimiia cétiï generates a new form of communication that aspires to connect with a world beyond human consciousness.

Co-commissioned by Moderna Museet, Stockholm and Serpentine Galleries, London in 2019, I Magma is a community of blown glass lava-heads and a mobile app that explore the notion of an oracle through alternative forms of intelligence and the application of machinic and chemical processes. NO NO NSE NSE, a related book by Sutela, was published on the occasion of her exhibition at Kunsthall Trondheim in 2020.

Sutela launched the publication Orgs: From Slime Mold to Silicon Valley and Beyond in 2017, which presents her research into the slime mold along with decentralized organizations to explore the unknown possibilities for future life on Earth.

“On nimiia vibié, Sutela connects us to worlds beyond human consciousness, many of which are far more intimate than they sound.”

“She is utilising machine learning to derive language from Bacilli subtilis…In this deep research practice, Sutela brings ideas to the discussion of artificial intelligence that very few are considering right now.”

Frieze: From Wetware to Tilt Brush, How Artists Tested the Limits of Technology in the 2010s, December 2019

MIT News: Finding the love hormone in a stressed-out world

Article: Finding the Love Hormone in a Stressed Out World

Jenna Sutela’s publication, Orgs: From Slime Mold to Silicon Valley and Beyond

Page from Jenna Sutela’s publication, Orgs. Courtesy of the artist.